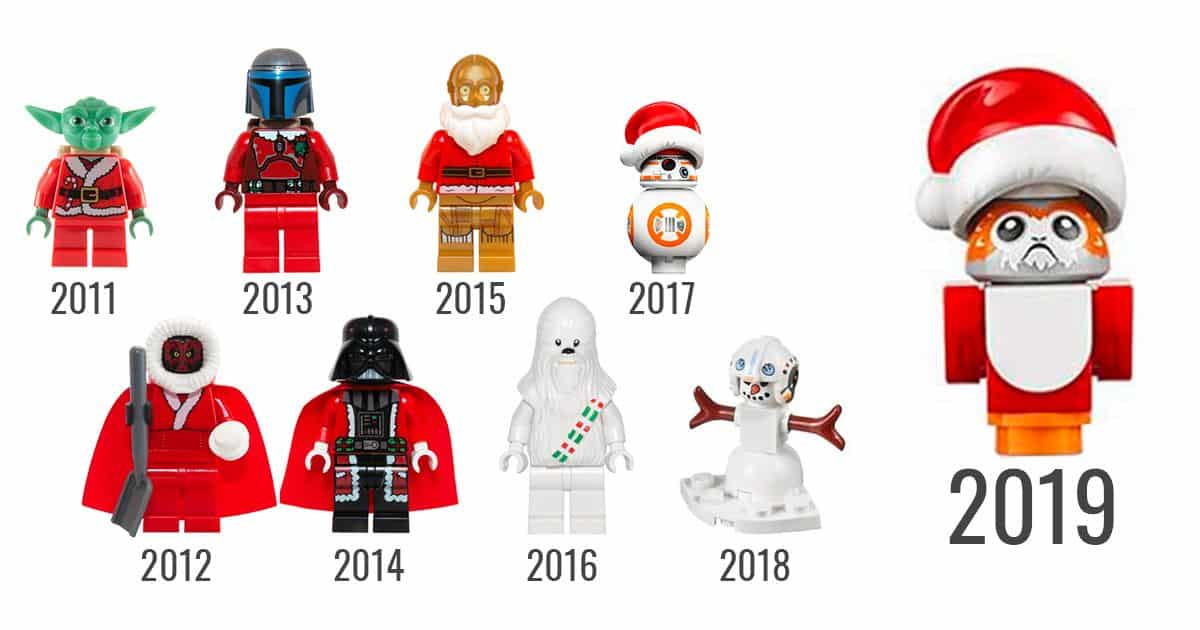 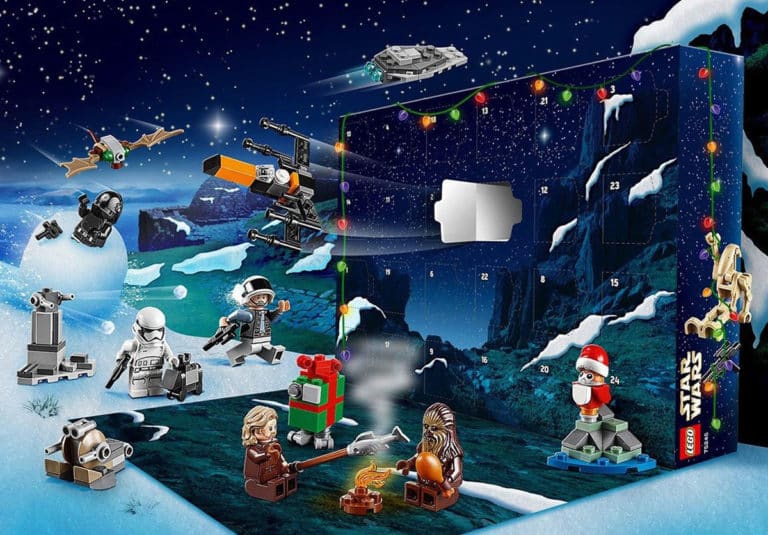 It’s about time because the first autumn biscuits have been on the shelves for a few days now and the first chocolate box will follow soon. So let’s take a look at this year’s LEGO Star Wars Advent Calendar, which is made up of 280 pieces. I’ll try to answer the question if this year’s calendar is worth it for you.

Spoiler: You should be aware that I present all the Advent calendar content extensively and in detail. If you want to be surprised, you should avoid this article! 🙂

In the box, there are 280 pieces with some mini-figures to discover among the usual mini-models to build, including an X-Wing, a Quadjumper, a First Order Star Destroyer or Kylo Ren’s ship.

As for the mini-figures, this year we’ll have a rather interesting selection of six mini-figures and some droids and other creatures: a Death Star Gunner, Luke Skywalker in the Ahch-To version, a Cloud Car Pilot, a Rebel Trooper, a First Order Stormtrooper, Chewbacca, a Porg dressed as Santa, a Battle Droid, a Mouse Droid, a Mynock and even a very festive Gonk Droid.

The small compartments can be opened by simply pressing with your finger, Inside the instructions are printed on each door. Depending on the model it can be more complicated than with some large sets of the Ultimate Collector Series.  There are 1-2 models, where you have to “guess” where certain bricks are used.

To make the revision a little easier, I opened the calendar and removed the cardboard that has all 24 compartments.

If you destroy the box completely, you also get an overview of all the instructions and the included models. I don’t recommend you to do that because of course it completely spoils the Advent calendar experience.

In the LEGO Advent Calendar Star Wars 2019, there are a total of 16 items, that I would classify as “mini-models”.

There are some good (and not so good) vehicle and spacecraft versions, but also the usual blaster, cannons and even a mini landscape. The biggest disappointment is certainly the 13th day, with just one 6 pieces mouse droid.

I found the models of the First Order Star Destroyer, Kylo Ren’s Shuttle, Poe’s X-Wing, the Mynock (known from the Millennium Falcon UCS) and the Cloud City Car successful. Also, the Gonk Droid looks great. The Blaster Rifle and Ahch-To Island are disappointing besides the mouse droid. But also the Quadjumper, which had only 2 seconds of screen time in Episode VII, I honestly didn’t want a mini-model.

If you like mini-models, you won’t be disappointed. If you buy the calendar (like most fans) because of the mini-figures, you will get your money’s worth.

The most important reason to buy this year’s Advent calendar is waiting for us on day 9: the old Luke Skywalker in Ahch-To Island clothes. This figure is so far completely exclusive and will probably remain so. All other mini-figures (except Santa-Porg) have already appeared in other sets. The Porg, besides the head, is made of normal bricks. It is neither exclusive nor rare.

The Cloud Car Pilot is a rather rare mini-model and it was only been included in the expensive LEGO 75222 Cloud City Set. Due to this calendar, its price will probably fall, but until recently the figure was traded for about $7.50.

Would I recommend the LEGO Star Wars Advent Calendar this year? That’s a difficult question.

For mini-figures collectors, the calendar is a must, since Luke Skywalker is a completely exclusive mini-figure that some people have wanted since Episode VIII was released. In addition to Luke Skywalker, the Cloud Car Pilot is of course still interesting. First Order Stormtroopers and Battle Droids are never enough, and you can never say no to a Rebel fleet soldier. The Mynock can still be wonderfully placed in the Millennium Falcon and some of the mini-models do well next to the big models on the shelf.

Besides, the LEGO Star Wars Advent Calendar is frankly only “Ok”, but better than 2018. The year 2017 had very little to offer regarding mini-figures.  I like the exclusive Christmas figures from the 2011-2016 calendars better.

The shape is also the same as every year, a box with hinged top, which also serves as a display surface. In addition there are 24 compartments and a divided tray which holds the 24 bags with the individual items. Since the 2017 edition, this tray has been made of cardboard instead of plastic.

After nine figures in 2016 and eight in 2017, this year with a lot of good will we also land at eight. But two of them are droids and a “built” figure with a mini-figure head. The calendar includes five real mini-figures. That is already less than in the earlier years. 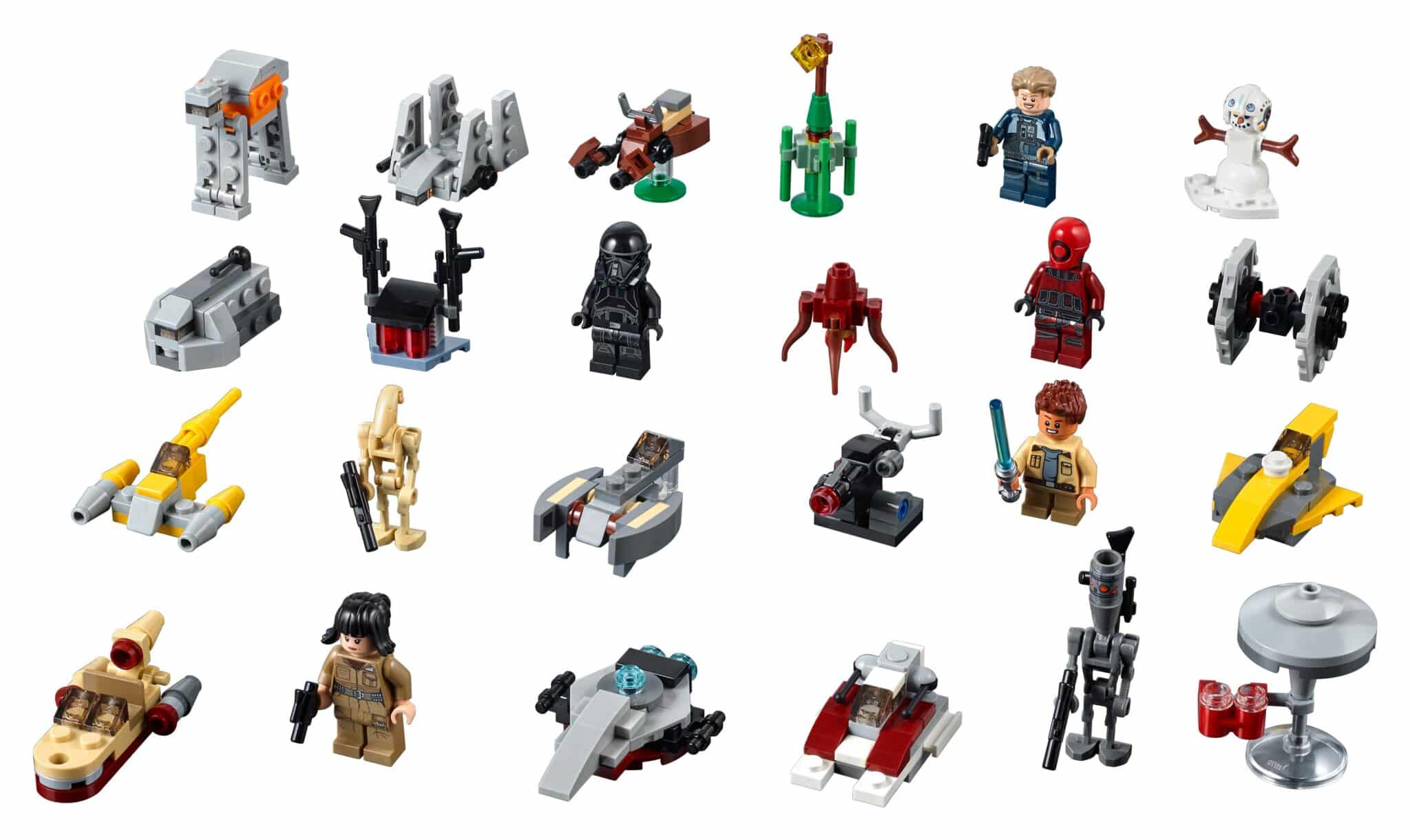 The rebel snowman is made of seven pieces, is inconspicuous at first sight, but two of them are interesting: a snowman’s head with the pattern did not exist before and the color of the rebel helmet is also new.

IG-88 comes in almost the same design as the 75167 Bounty Hunter Battle Pack, only the Round Plate 1×1 under the clamp on the back has been saved here – for whatever reason. At least he wears a real Blaster and not the Stud Shooter from the Battle Pack.

You can never have enough Battle Droids because they don’t bring anything individually, they always show up in a dozen. Otherwise, there is not much to say about it.

Now it gets interesting because Antoc Merrick is the only exclusive character in this calendar. And by exclusive I mean the head and the hair, because torso and legs are borrowed from the U-Wing (Torso+Legs) or Y-Wing Pilot (Legs). If you’re wondering who Antoc Merrick is, he played an X-Wing commander in Rogue One: A Star Wars Story while attacking Scarif.

The Imperial Death Trooper comes from the 75165 Imperial Trooper Battle Pack and the Guavian Security Guard from the 75180 Rathtar Escape. I still think the head is really good. Rowan from the Freemakers from the set 75185 Tracker I. And last but not least, Rose Tico. You can find them in the glorious 75176 Resistance Transport Pod set.

As promised, here are three of the remaining mini models. I have chosen the Rathtar, the Cloud City with Cloud Car and the Christmas Vaporator. I like the color of the Rathtar, especially the red wrench. Cloud City has finally succeeded in its form and the Cloud Car is ingeniously simple. And since we have an advent calendar in front of us, I am especially happy to find a piece with at least some Christmas cover with the green vaporator. 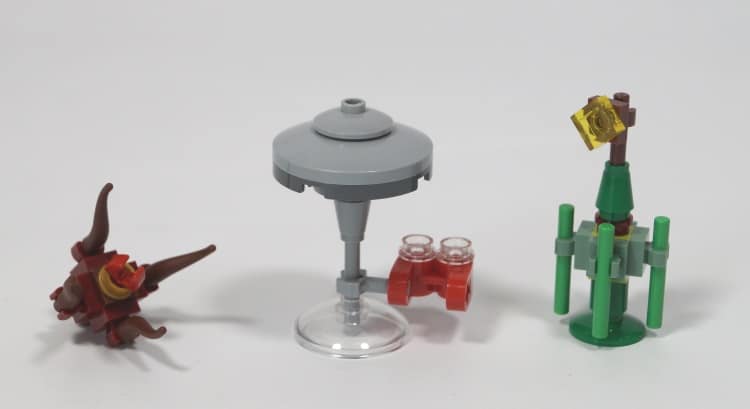 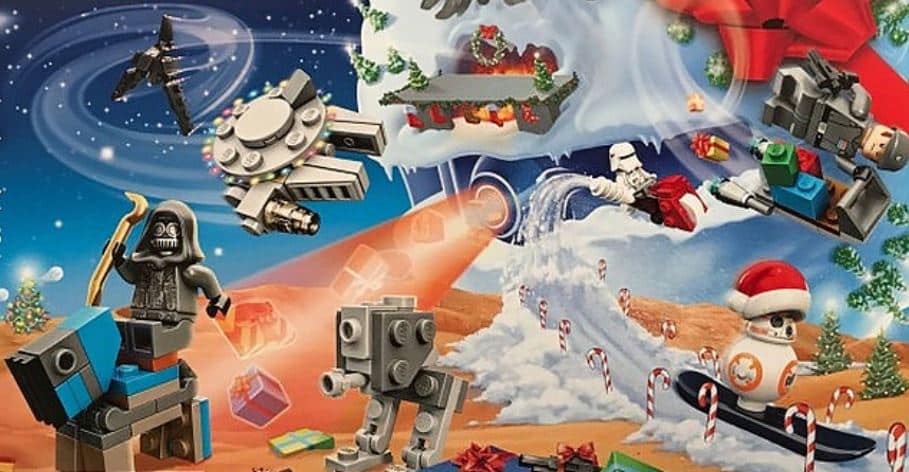 The calendar includes 8 mini-figures and about 14 mini-models, which are mainly spaceships and vehicles.

Topic: Jakkur is a planet whose surface is covered by desert. After the Battle of Endor, the planet was the scene of an attack by the New Republic on important imperial hiding places. Spaceships of both factions crashed on the planet.

Highlights: Included is a play mat with game scenes on Jakku. One scene takes place in the Starkiller Base and another in the depths of space. 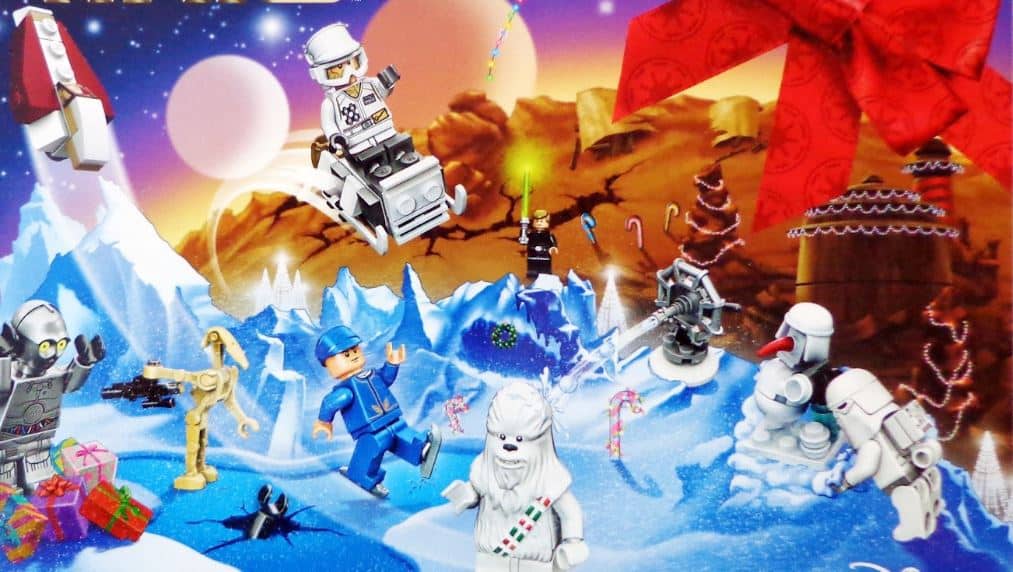 Included are 9 mini-figures and a total of 15 other mini-models. These are mainly spaceships and small components.

Main focus: The planets and worlds of Hoth, Tatooine, and Naboo

Highlights: Included is a play mat with game scenes on Hoth, Tatooine, and Naboo. The set also includes the Luke Skywalker mini-figure and two Blaster pistols. 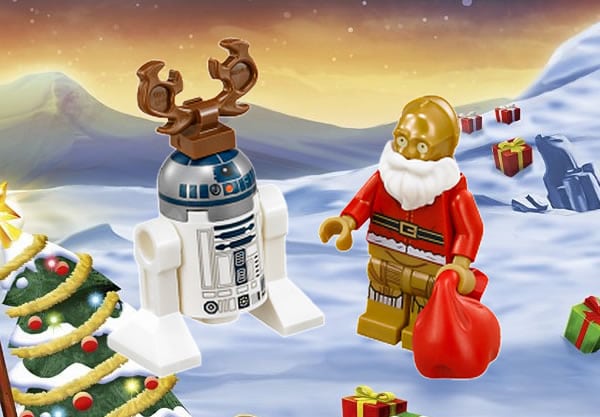 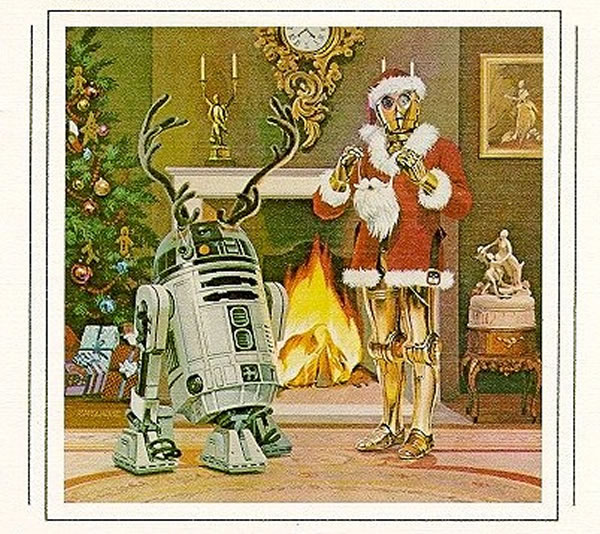 This calendar contains altogether 9 mini-figures as well as 17 spaceships and small models.

Main focus: There are mini-figures, starships, and vehicles from the three planetary worlds of Tatooine, Endor, and Hoth to discover.

Highlights: Millennium Falcon and folding play mat on the three theme worlds. There are also two Christmas droids on board. 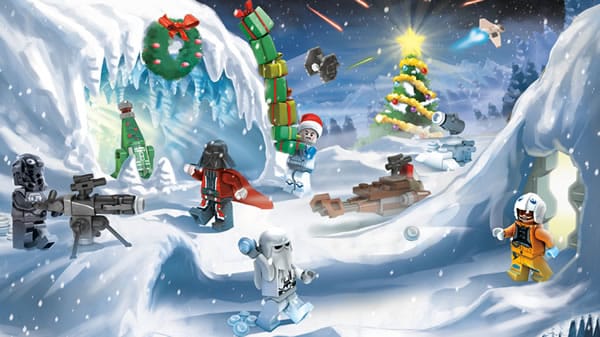 The Advent calendar contains 9 mini-figures, including 2 exclusive figures, 10 ships, and vehicles, and 5 accessories and weapons.

The main focus: no specific planet world. Focus among other things on space ships and pilots. 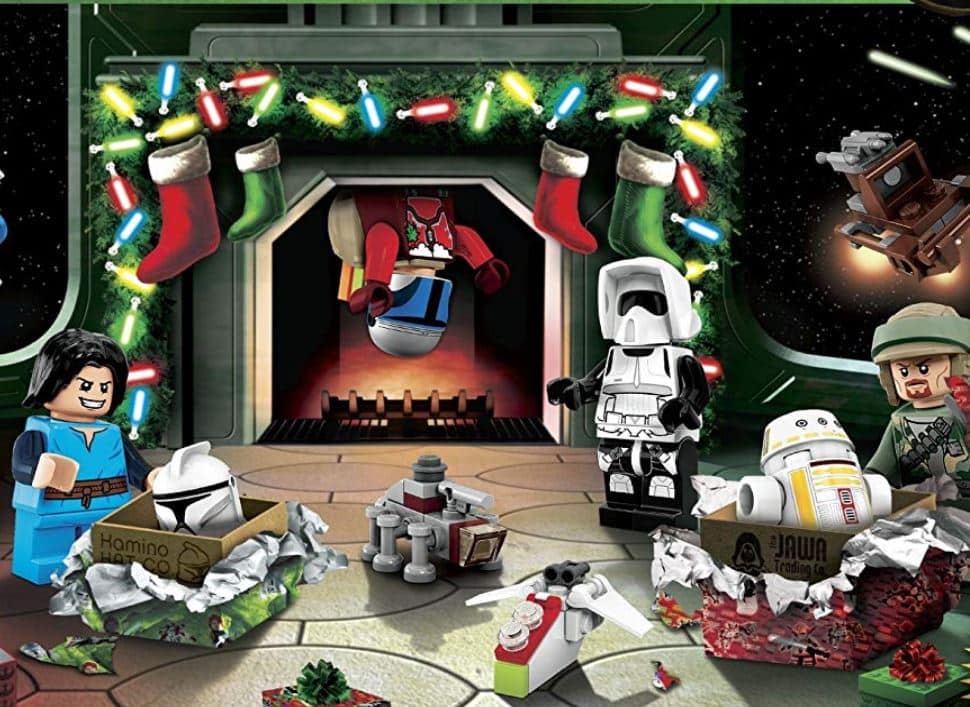 Topic focus: no special focus. Some figures and small parts come from the forest moon Endor from ‘The Return of the Jedi’.

The advent calendar of 2013 contains 9 mini-figures and 15 components. 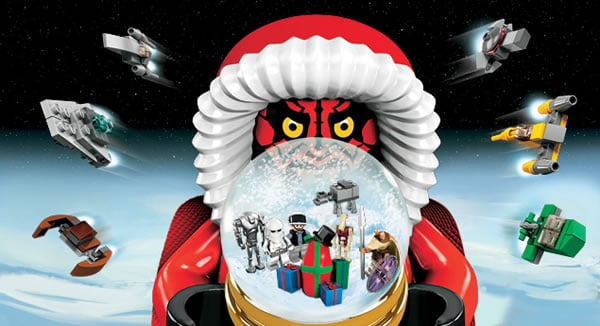 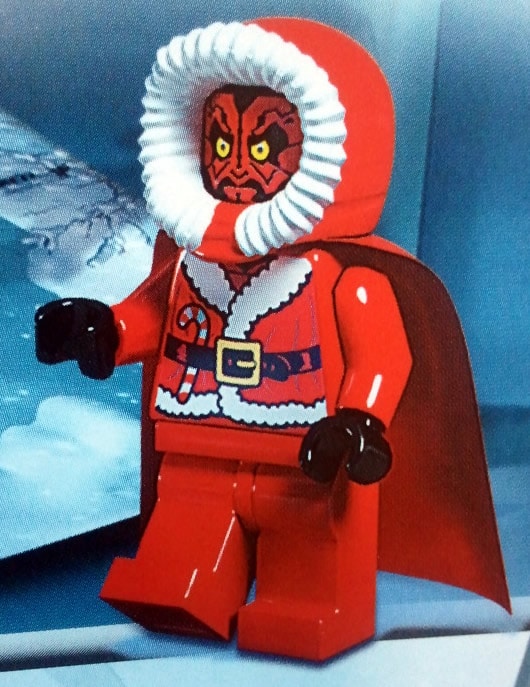 The LEGO Star Wars Advent Calendar was released in September 2012 and features 10 mini-figures and around 15 mini-models. A Gonk Droid is built from individual Lego bricks.

Highlights: with Darth Maul, Mini Gungan and the Starfighter by General Grievous 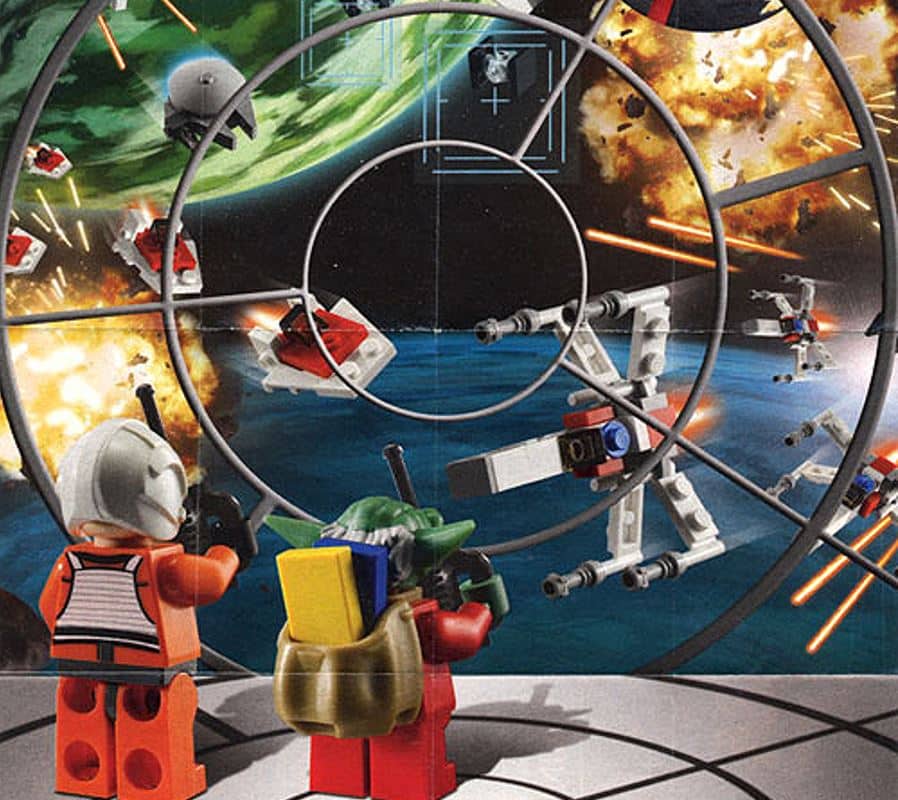 The LEGO Star Wars Calendar was first released in 2011. So this is the first edition of the LEGO Star Wars Advent Calendar. It includes 8 mini-figures and 16 spaceships and small items. The set is still available. The prices are significantly higher compared to the later sets. Here fans pay collector’s prices.