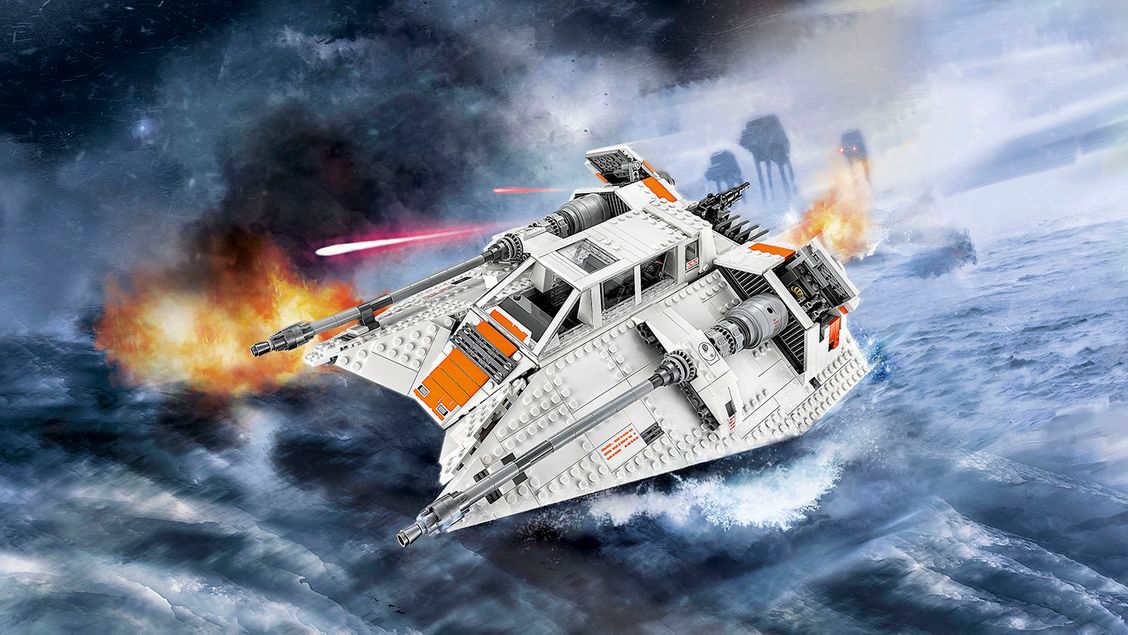 Originally designed for civilian use, the T-47 Airspeeder had to be modified to act as a military ship to become the Snowspeeder. The Snowspeeder appears in Episode V: The Empire Strikes Back. This ship is famous for its memorable scene with an AT-AT (All Terrain Armored Transport), during the battle on the ice planet Hoth.

Anyone who was desperate to add a Snowspeeder or T-47 AirSpeeder model to their UCS (Ultimate Collector Series) collection must feel relieved since the 75144 Snowspeeder set was announced.

First because it’s a beautiful (and big) detailed ship, and it’s what best represents the UCS line. Then because the previous UCS version, the 10129 Rebel Snowspeeder, is now almost 15 years old (released from 2003 to 2005) and its rarity has made it inaccessible for the average person (more than $1500 for 1457 pieces…). And simply because it is really successful, and far superior to its predecessor.

The LEGO Star Wars 75144 Snowspeeder set, with its 1703 pieces and its two mini-figures, is a must. Nice work on the box, very attractive, which perfectly highlights the ship.

I am very pleased with this model, although I would like to point out a few details that I find questionable.

Some will rightly wonder about the color of the LEGO version. The manufacturer once again delivers a model where white is the main color, while the Snowspeeders ships used in the film were obviously grey.

White is probably a much more rewarding color than a grey all-ship. And I think that the right color for the Snowspeeder would probably be a very light bluish grey. Light grey only appeared at LEGO for a few dozen pieces (Bionicle, Knights Kingdom II…). In short, an old color that is almost unknown because LEGO hardly uses it at all.

It’s not difficult to understand why LEGO chose white for Snowspeeder. In 1999, LEGO introduced a grey version into the 7130 System set and a marketing study showed that grey was not attractive enough and white was the right choice. But the fact remains: the Snowspeeders on the screen are not white.

Note, when it comes to colors, that some white pieces are less white than others… As some stickers are very white they reinforce the impression that white pieces are not immaculate white. It is not embarrassing when the ship is finished (you don’t realize it), but I couldn’t help but notice it a few times during construction. 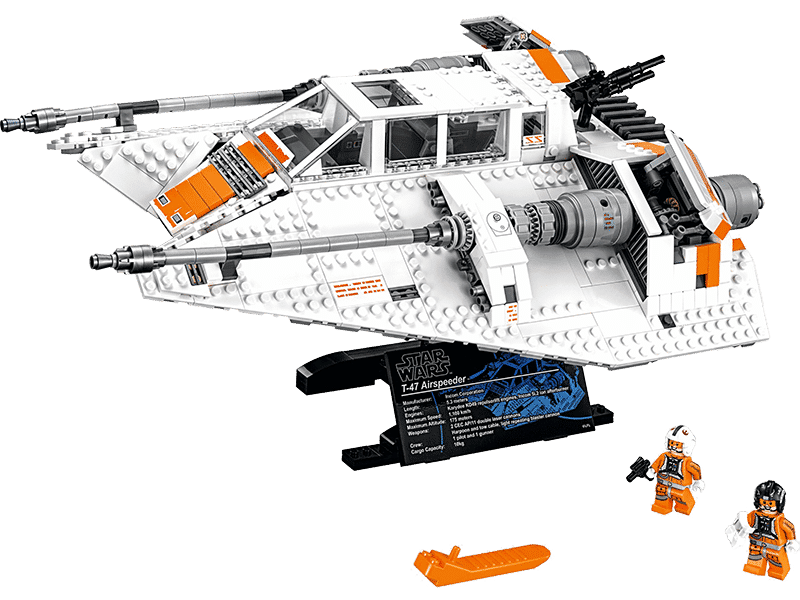 The box is well filled: with 13 numbered bags, a good set of instructions (299 pages!), you feel like you’re getting value for your money and it’s already a good start. The instruction manual has some information/interviews to start with, as usual with this type of set.

It took me almost one day to get thought this model. Nothing too complicated. Until applying about thirty stickers that cover this set, including those that define the cockpit lines more precisely. You can never say it’s too much, the words Ultimate Collector and Stickers definitely do not match. The “good” news is about the cockpit: it’s not a big transparent sticker to stick on, so don’t worry about unsightly bubbles or dust.

I am always surprised that LEGO proudly presents these sticker boards in the designers’ videos: at more than $200 per box, the pad printing costs of the pieces would be largely amortized and we would thus have a real premium experience, like the ones offered by LEGO in the LEGO Ideas and LEGO Architecture series…..

LEGO seems to be aware of the difficulty in correctly applying some of these stickers and gives some tips to make them easier to apply:

“Our designers have shared this trick for applying decals: lightly spray a window cleaner on the surface of the parts to be decorated. This will allow you to adjust the decal without damaging it. Once you have the decal in the right place, use a flat edge to smooth out any bubbles and let it dry.”

As usual with Star Wars vessels of respectable size, the assembly starts with the internal structure of the ship. This is done using many Technic components, ensuring a certain rigidity to the overall structure, and preventing the model, which is particularly impressive once finished, from breaking under its own weight.

No surprise: the ship is clearly not on a mini-figure scale, but this makes it possible to get a well-detailed cockpit. If you still doubt, just sit the pilot or shooter in their seats. Inside, it should be mentioned that the shooter’s screen represents the foot of an AT-AT. The reference to the Battle of Hoth is a quite nice feature. The interior layout is completed by the addition of two seats, one back to the other, placed on hinges and separated from each other by a curved piece. It’s very well done. Generally speaking, one wonders how the designer managed to bring so many details into the cockpit. It’s amazing.

The first element noticed during the official presentation of the set was a new canopy for the cockpit, which also allows a much closer rendering of the original. This new canopy version, even though it represents a significant evolution when compared to the 2003 version, is still not 100% faithful to the model from which it is inspired. The side windows distribution is not entirely correct in the LEGO version. Personally, I think it is a detail, and does not spoil the overall result.

Those who already have the previous UCS Snowspeeder will not feel like they are doing exactly the same thing again. LEGO offers new techniques. The real challenge of this model was to respect the angles of the original ship’s structure. The designers are doing very well at this point thanks to the ball joints, particularly in the nose, whose angle is now more pronounced than in the 2003 model and well aligned with the front window of the canopy.

The side panels are placed using two rubber bands, which allows the desired angle of inclination to be obtained. I can understand the approach and I have nothing better to propose, but I always wonder about the ageing of the rubber… they will clearly not be as durable as the bricks!

On the rear, the designers manage to correctly reproduce the cooling fins, keeping them with the distinctive look that fans are familiar with. They are very well reproduced by a dark blue-grey pieces overlay. The designer has come to the point of recreating the details between these fins. These fins are comprised of two subsets, which are then attached to the set using Technic pins. It’s less coarse than the 2003 version, but it’s a little more fragile. You just can’t have everything.

The black display stand is set up in the middle of the structure. It slots into the underside of the Snowspeeder and comfortably supports the model in two positions, either level or angled towards the port side. To this support are added the two mini-mini-figures provided.  Sticking the huge label showing the model’s technical features is a feared step for many Ultimate Collector Series regulars. Again, a stamped plaque would be welcome… A tip: do not stick it all together. Place it parallel to the side of the panel and make sure it is centered. Apply gradually, pressing well to remove the air (with the help of a card or something similar).

The designers did a really good job of proposing a very pleasant set, with many details that are pleasant to build and admire. The attention to detail is even pushed very far with an effort made on parts that are not or not very visible, such as the ventilation vents hidden under the ship’s wings and almost invisible except from a very particular angle. This is the kind of small attention that allows this type of set to really deserve without discussion its UCS logo.

On the functional side, some fun and well thought out details. Even though the goal of such a set is more exposure than the game, it’s always interesting to build these small game features, especially when they don’t distort the ship overall aesthetics.

The opening of the upper air brakes can be activated simply by rotating the engine. It is very simple, but it works perfectly, and you can vary a bit the way you expose the Snowspeeder. The other feature is the magnetic harpoon: turning the shooter’s handle back allows the harpoon to spin. 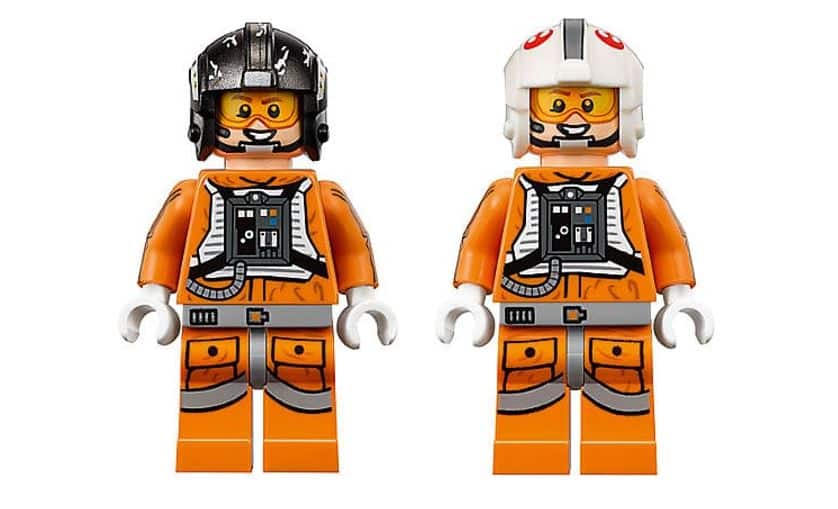 First of all, it is worth mentioning that the ship is larger than the mini-figures scale. Those provided with the set, therefore, will only be used for display.

LEGO adds two mini-figures with pad-printed arms to this box. It is impossible to clearly identify them. They have the same outfit and the same face. Only the helmet is different. LEGO is careful not to name these two mini-figures on the box by simply assigning them generic names.

The instruction manual, which has a few pages of interviews with the various artists and designers involved in this set production, informs us that the mini-figure with the white helmet is in fact Will Scotian, a second-rate character seen in the briefing scene before the Battle of Hoth.

Based on the his helmet appearance, the other mini-figure would be eventually the Zev Senesca pilot even if the helmet in question is not totally faithful to the film version.

However, the execution is particularly careful: absolutely all body parts are blocked, except the hands. The legs, the belt, the torso, the helmets and even the arms were made with a level of detail never achieved before in a rebel pilot mini-figure. Each of them has its own accessory, the first of a pair of binoculars, and the second of a blaster pistol.

In the end, and despite some minor shortcomings, this Snowspeeder contributes a lot to save Ultimate Collector Series reputation, lost in 2016 with the very questionable Battle of Hoth 75098 release set.

And if the top of the ship is almost entirely white, the bottom has not been neglected and has entirely gray pieces. Even if it is definitely not the part you will see the most, it is clean and with some details.

We finally return to what makes this line so prestigious with a detailed and convincing reproduction of an emblematic spacecraft from the Star Wars saga and that’s good news.

The two mini-figures available do not bring much to the set except if we consider that they are simple decorative elements of the base-plate display. The base really allows a beautiful model display. However, most of the time, the two mini-figures are completely hidden underneath, so we don’t take advantage of them!

A great pleasure to build, a generally solid and well designed set, just the right amount of well-integrated play features and a better faithfulness to the original model, there’s really no need to hesitate if you’re a Star Wars fan. And even if you have the previous version from 2003, here is a remake that is really worth it. 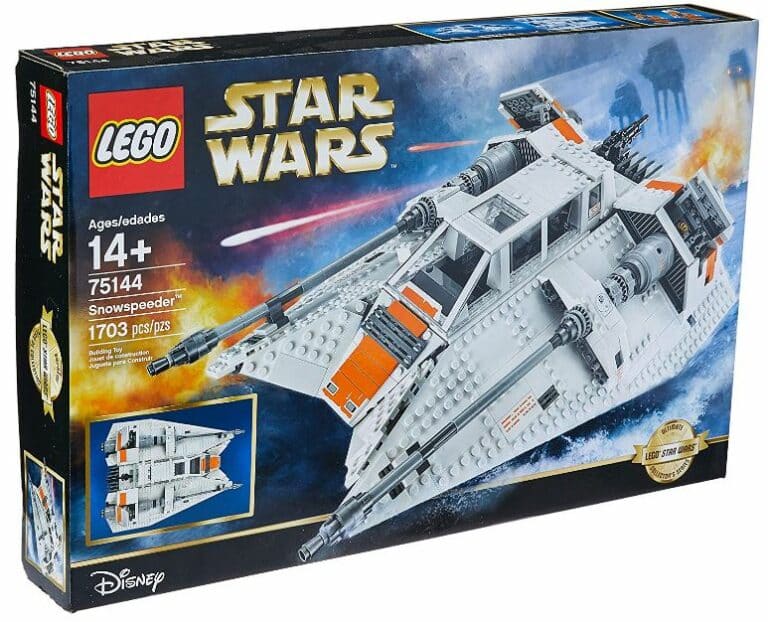 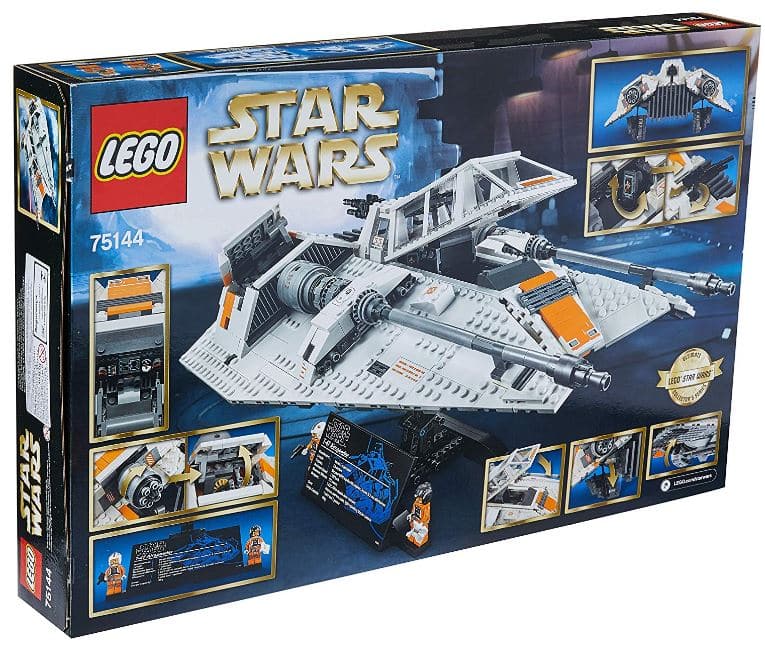