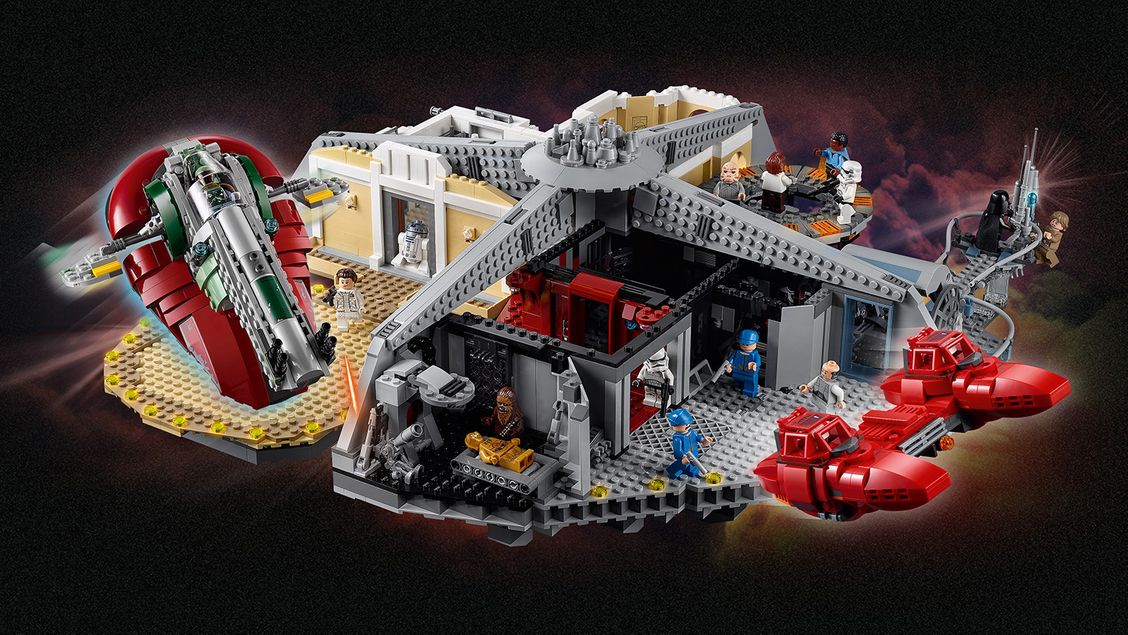 Fans of the Star Wars universe who also love LEGO were eagerly awaiting the manufacturer’s new set of the mining complex that floats in the Bespin planet’s atmosphere and is home to many scenes that have become cult for a whole generation.

Let’s be honest, the 10123 Cloud City (#ad) set released in 2003 didn’t leave an unforgettable memory for fans. So it was time for LEGO to give us a slightly more exciting version of the City of Clouds. Mission accomplished or not, everyone will have their opinion on the subject. As far as I’m concerned, I’m disappointed, but I love it. It’s complicated.

I had probably idealized a little too much what a 2018 Cloud City set could be, due in part to the many very successful MOCs that circulate on Flickr. 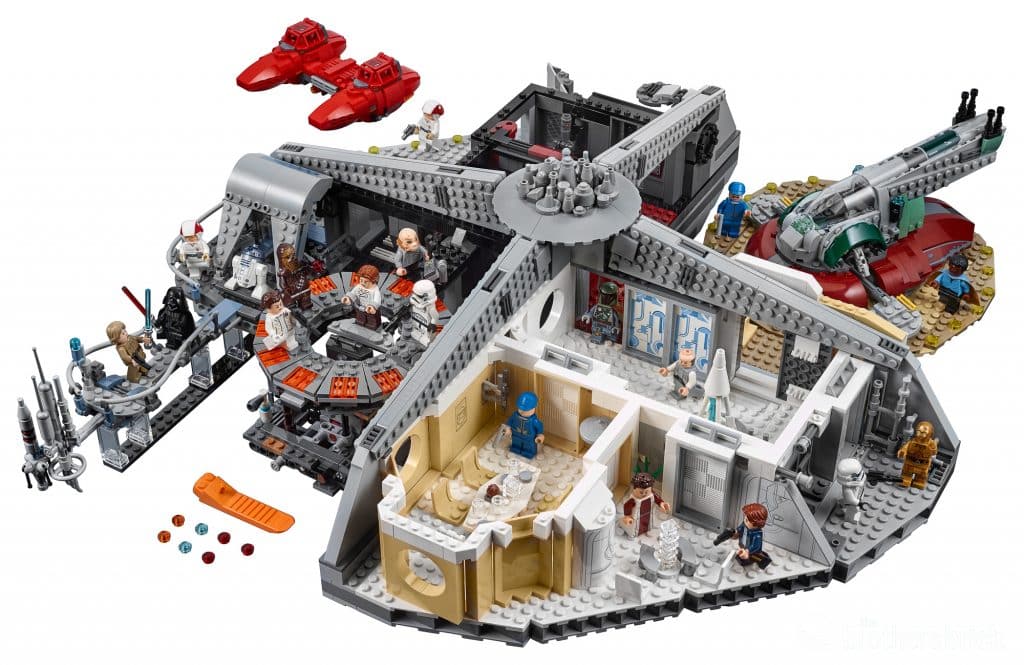 Where the 10188 Death Star  (#ad) (2008) and 75159 Death Star (#ad) (2016) sets are acceptable compromises because they try to keep the general appearance of the place concerned as best they can, the 75222 Betrayal at Cloud City set does not even make this effort. The distribution and finishing of the different spaces is a matter of debate, with a landing platform for the Twin-Pod Cloud Car which probably did not deserve to take up as much space and a reception room a little minimalist with its chairs on the floor….

I note that young fans aged 14 and over will be able to “have fun” playing Han Solo’s torture scene again in the small, carefully arranged room provided for this purpose. Even if the smuggler won’t tell them anything because Darth Vader asks him absolutely no questions, they can simply let their sadistic impulses run free without their parents worrying about anything more than reason.

I’m a little disappointed by the overall appearance of the set, it almost looks like a game space tinkered with by a young LEGO fan who doesn’t yet master the art of finishing and geometry, not to mention the three-dimensional aspect of a reproduction. It’s a little flat, some smooth plates are missing in some places and there are too many visible studs for my taste.

Note that it is impossible to move the whole unit in one piece, the platform for Slave I and the freezing chamber are not fixed to the main structure.

No big surprises during the construction phases, the set rests on a brick cross and it is stacked with slabs and small elements that are used to furnish the several spaces. You don’t have to wait until you are 14 years old or a Master Builder to enjoy this box. Go even if you are too young for LEGO or have big fingers….

So here I am with a slightly deformed play-set that simply piles up references to the various scenes that take place in the location. No removable panels to cover the whole thing and reveal this or that scene according to the mood of the day, it’s a shame.

The fan service is wreaking havoc here, as if LEGO had been afraid to forget something and miss sales… The designers certainly watched the different scenes in slow motion so that they could reproduce every detail and not be blamed by a horde of bloodthirsty fans for the possible freedoms they may have taken. Good for all those who are sensitive to this fidelity down to the most insignificant detail. 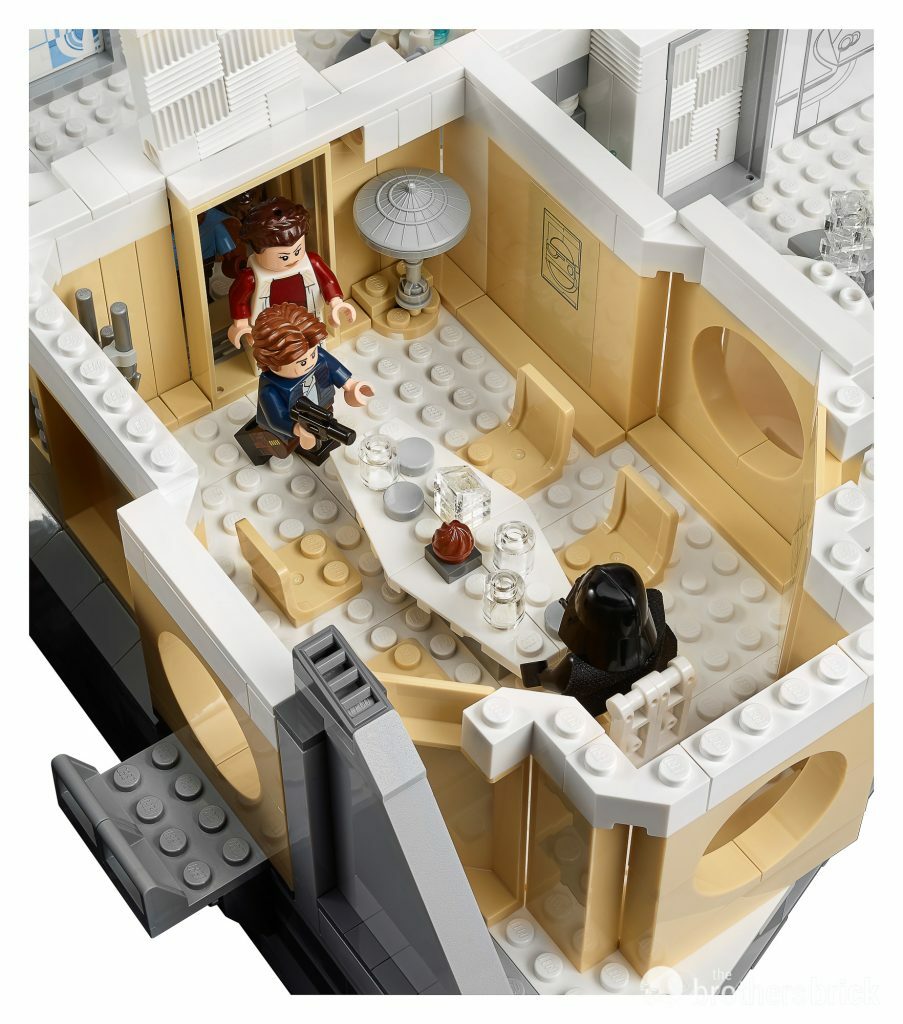 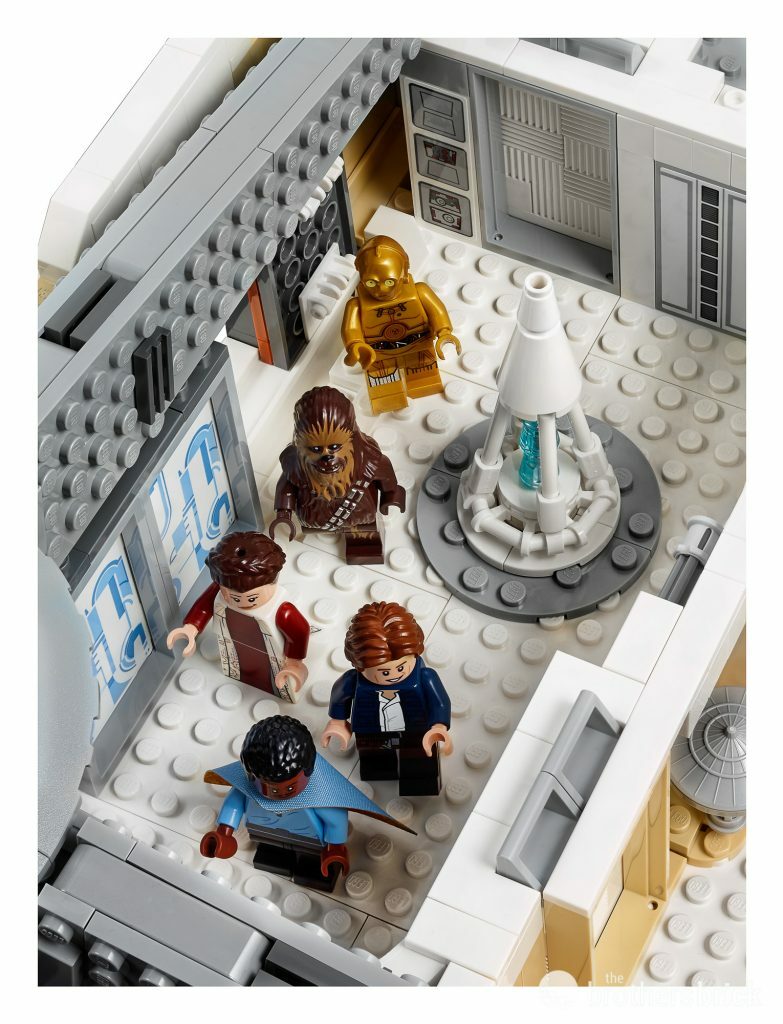 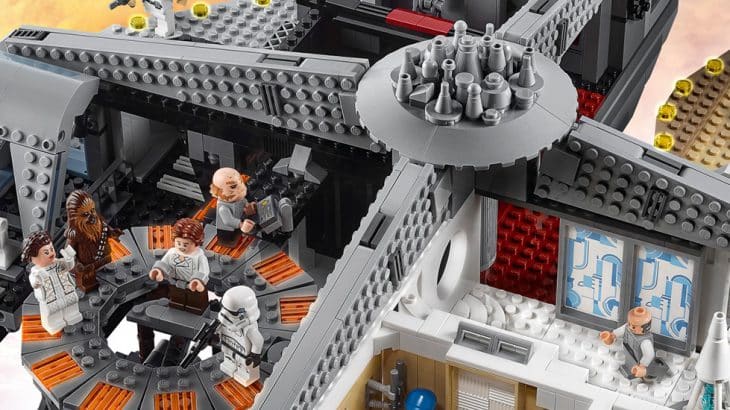 Nevertheless, it takes a little imagination to recognize the City of Clouds with this assembly, which takes neither its general form, nor its architecture, nor its external aspect, if we do not count the small set of pieces symbolically placed at the centre of the construction.

Should we use the name play-set for this box, the only real feature being the mechanism that allows Han Solo to be immersed in carbonite? I don’t count the few moving doors and the secret hatch in the hangar, let’s not exaggerate either. 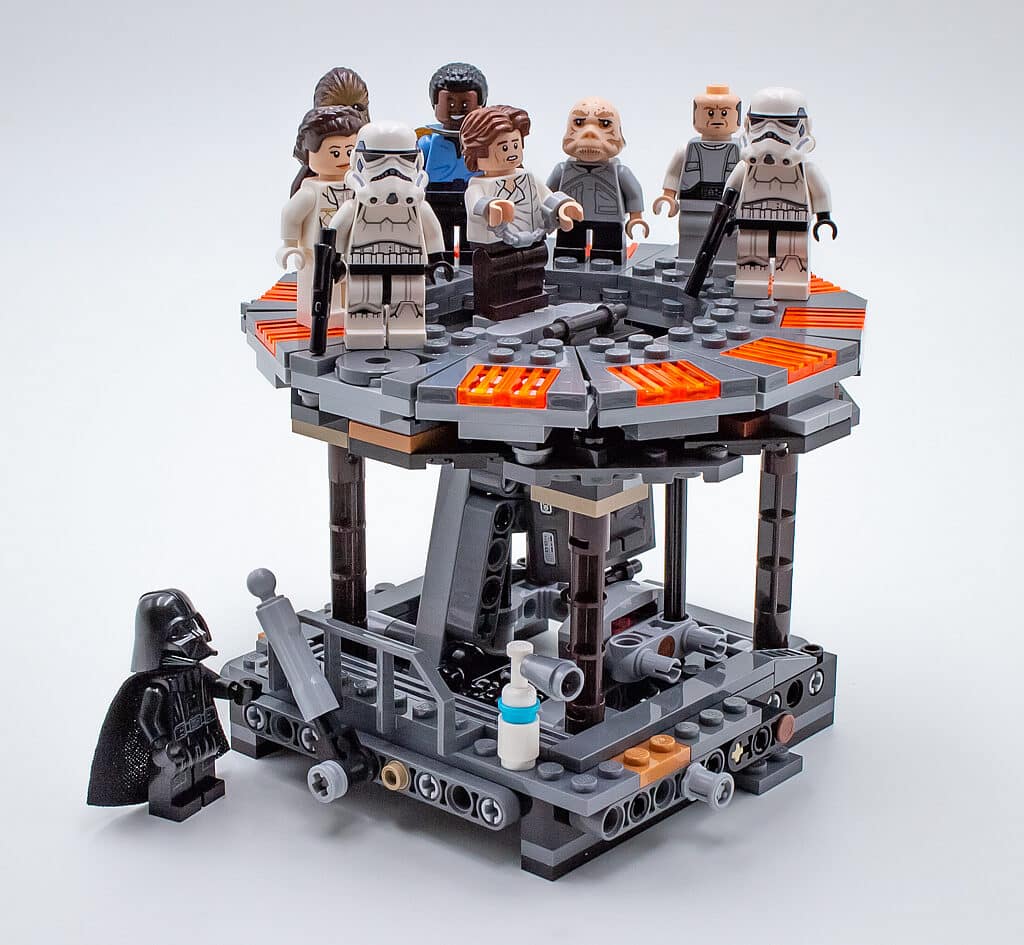 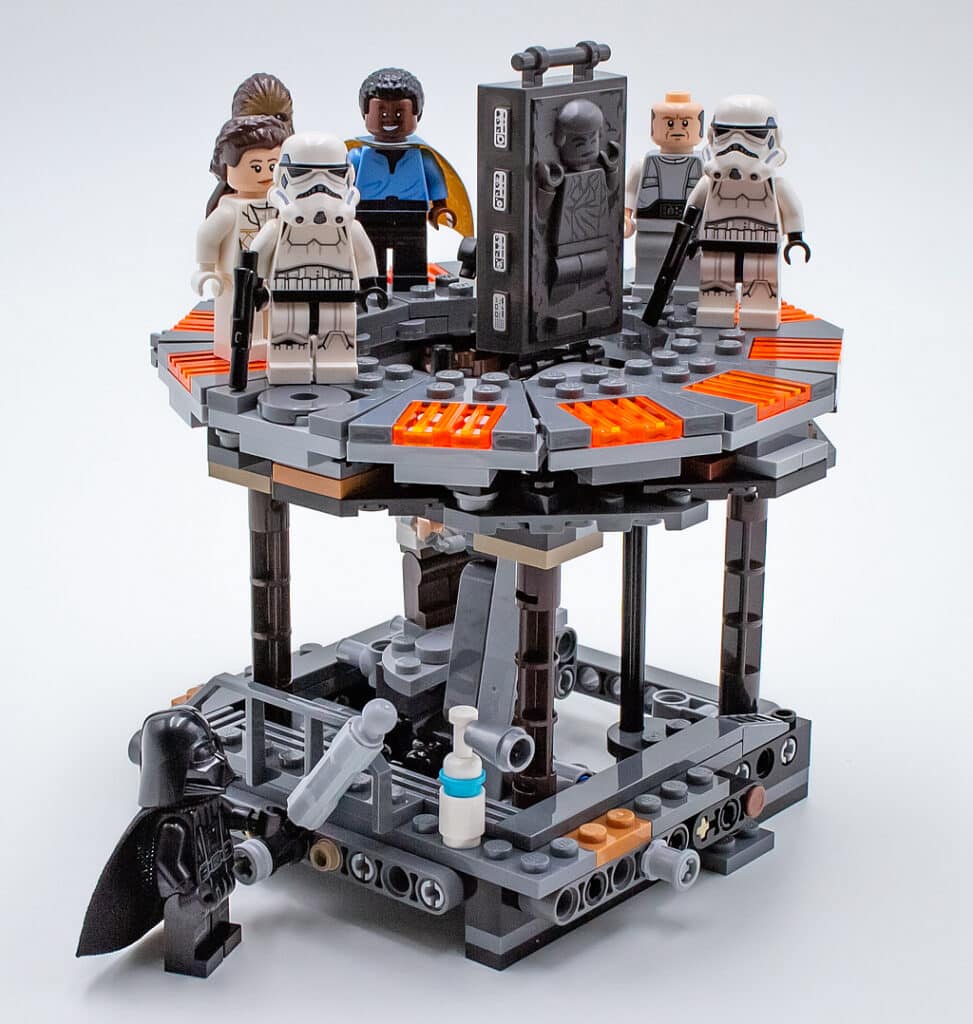 The mechanism to retract the mini-figure and make the sarcophagus appear is well thought out, it works, it’s fun for five minutes and it’s less laborious than the system delivered in the 75137 Carbon Freezing Chamber set.

In the set description, LEGO guarantees that”…The aerial battles between Boba Fett’s Slave I ship and the Twin-Pod Cloud Car can be replayed with this set…”. I may have a bad memory, but I don’t remember a clash between the two ships.

That being said, LEGO provides here two very compact versions of the vessels in question. You have to be careful to install their respective drivers. Don’t ask me why, LEGO insists with the red color for the Twin-Pod Cloud Car while the device is obviously orange in the film.

On one side, the Cloud Car pilot is a bit cramped and on the other side you have to adjust the antenna of the Boba Fett helmet in the right position to be able to close the canopy of the Slave I. Some will find it cute and chibi, others will find it just acceptable. Tastes and colors are not negotiable and we’ll deal with it. Those who want a Slave I on a more coherent scale only have to invest in the 75060 UCS Slave I set marketed since 2015 and still available at €219.99. 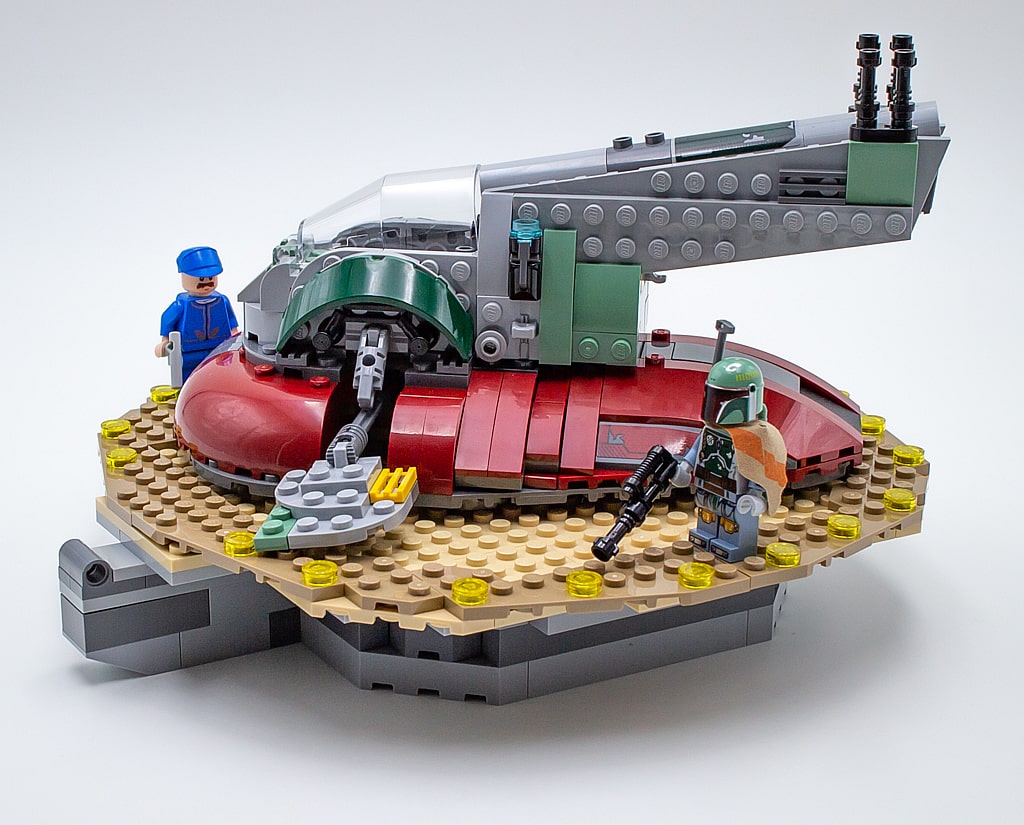 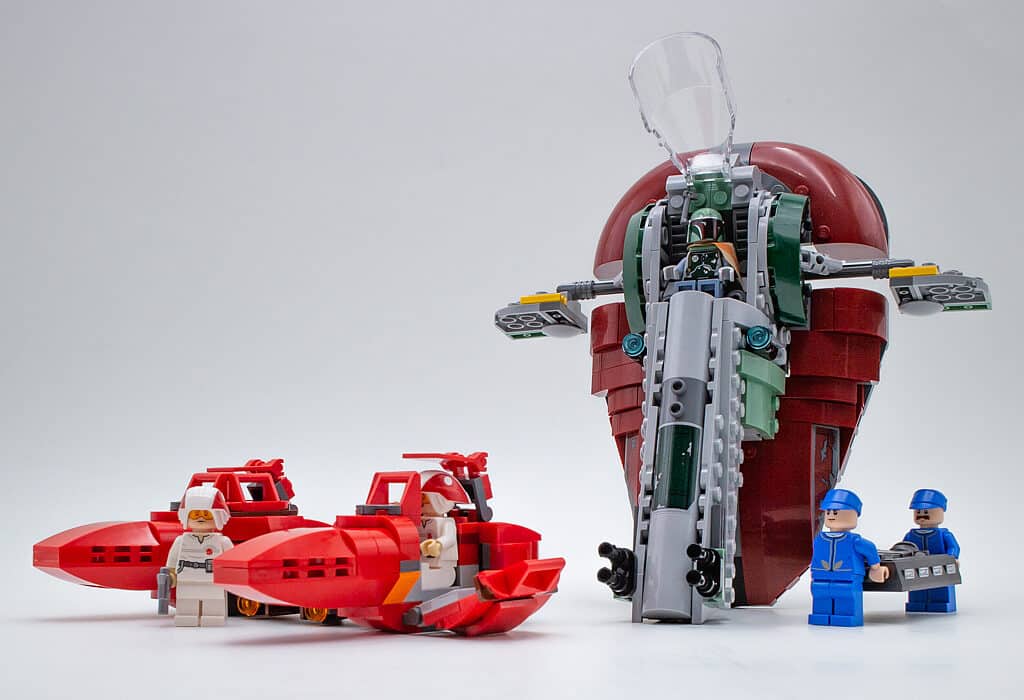 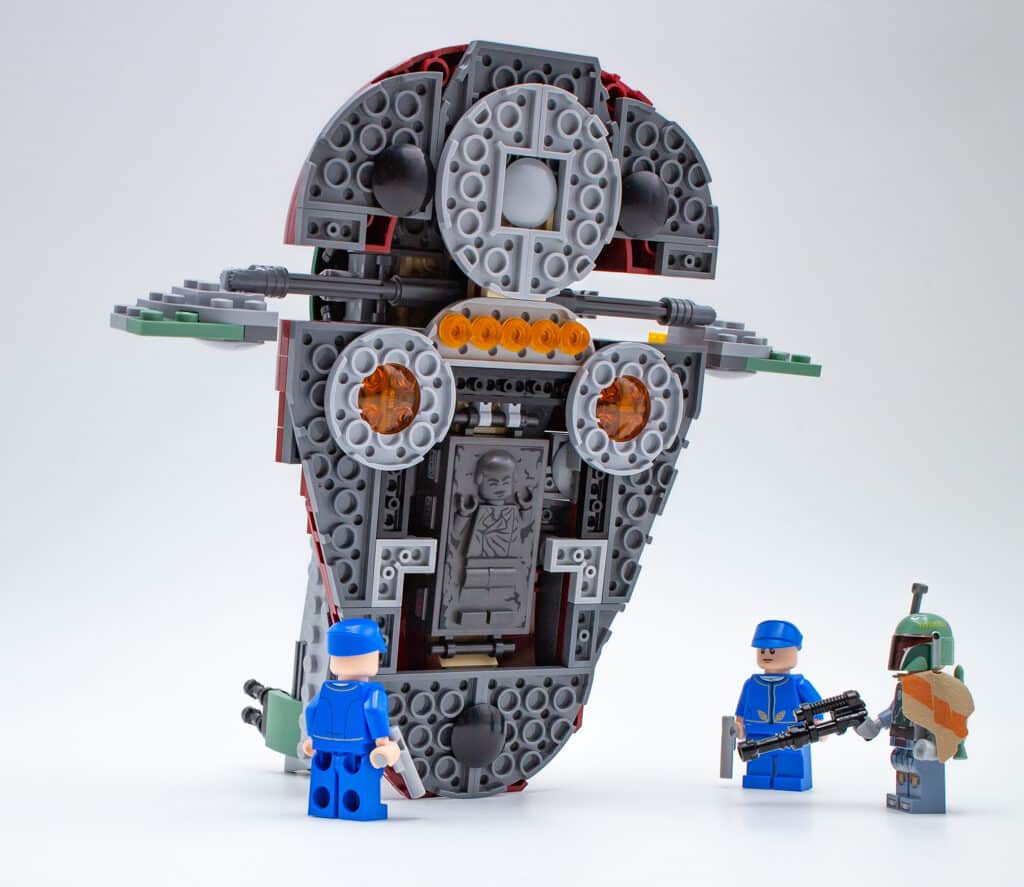 On the mini-figures side, the fan service still comes into action in a very nice way with a bunch of characters including Leia and Han Solo delivered in two versions (Hoth and Cloud City). Collectors will be thrilled…

Lando Calrissian’s pretty cape, Han Solo’s legs with two-colour moulding, Lobot’s new face and the helmets of the Twin-Pod Cloud Car drivers. These mini-figures are great but they don’t do everything in a LEGO set of this size. A good point, the inventory is rather complete, there is enough to have fun and/or change the settings.

Also note the significant color difference between Leia’s torso and the bottom of her outfit or C-3PO’s off-centre eyes. It is a pity that in 2018, a manufacturer whose business is this and is not yet able to solve these problems.

Luke Skywalker is delivered here with his right hand, you can obviously remove it to really replay the duel’s final scene (and then put it back on again, it’s LEGO, it’s made for that). 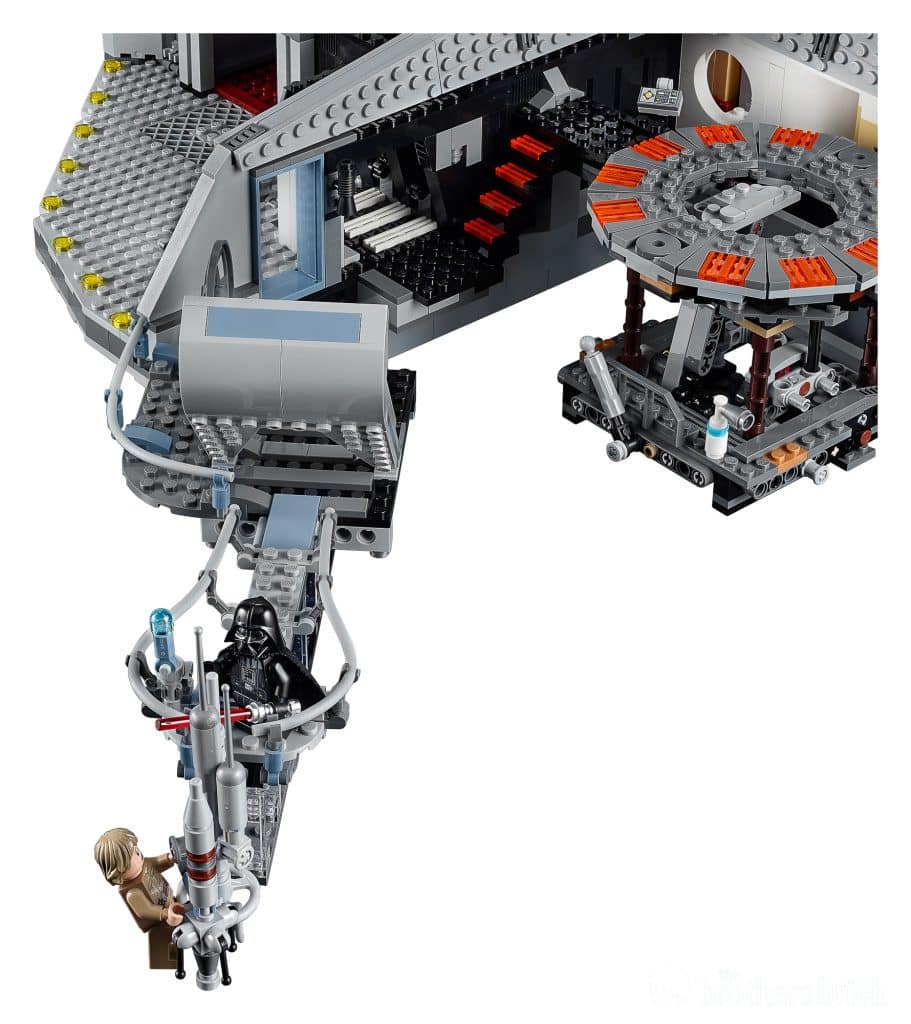 The duel scene between Darth Vader and Luke Skywalker deserved better than being placed in a play-set at 350 € with forceps. I hope that LEGO will one day consider marketing a more affordable standard set that reproduces this central scene of the saga. Other scenes, some of which are really trivial, have already had this honor…

The specifications are respected here: This set includes just about everything that makes the City of Clouds such an important part of the Star Wars saga. Perhaps it would have been more useful to market several modular sets allowing to gradually reconstruct a City of Clouds according to everyone’s desires and the available budget.

LEGO has chosen to put everything in the same box, probably to clear the subject out once and for all, at least for a few years.

In the end, I say yes because it was time for LEGO to propose a new version of the City of Clouds. Even if the set is not my dream reproduction, it is an acceptable and exhaustive summary of what makes Cloud City a key element of the Star Wars saga.

The Master Builder Series is focused upon play and I think 75222 Betrayal at Cloud City (#ad) is very successful in that capacity. 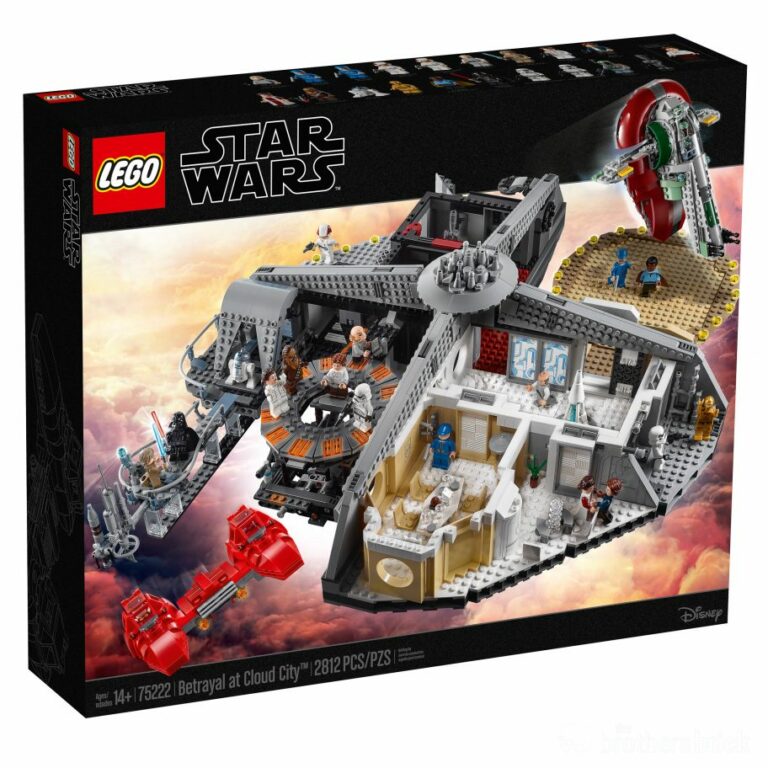 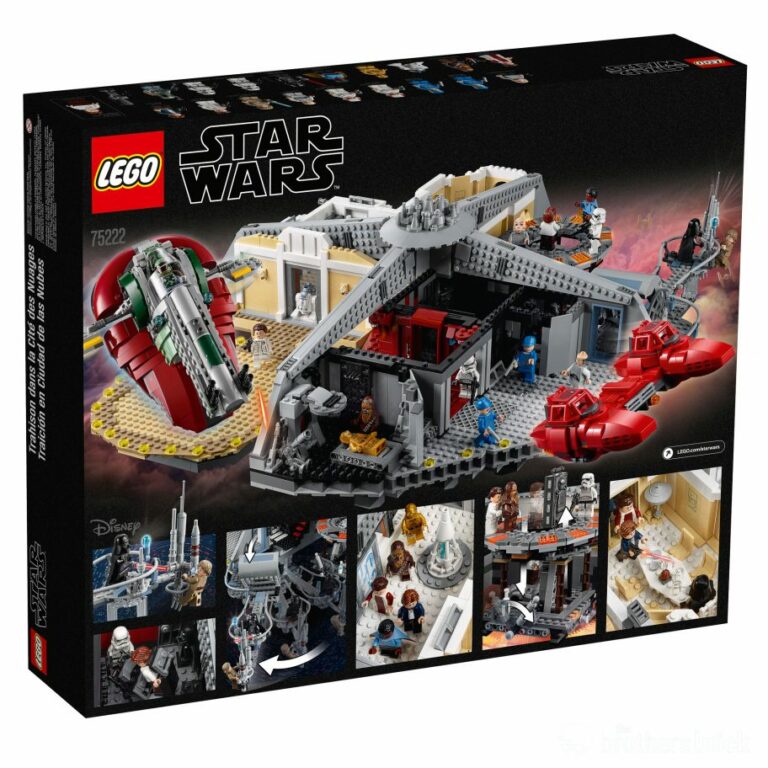