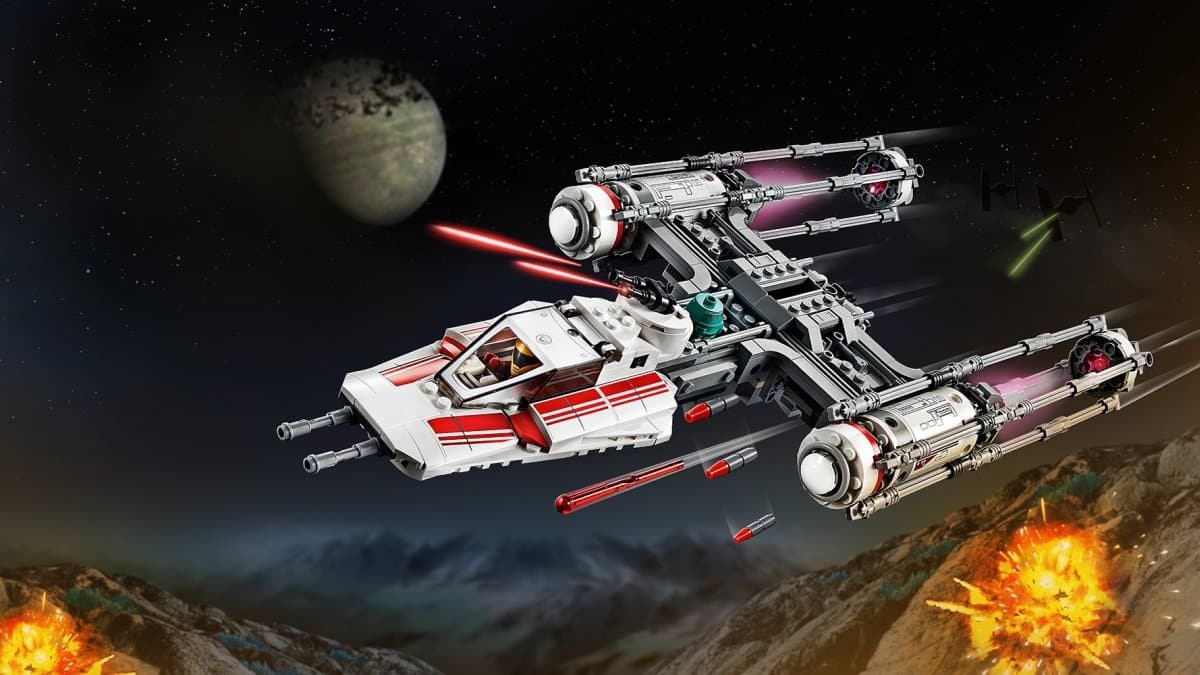 Today we take a quick look at the LEGO Star Wars 75249 Resistance Y-Wing Starfighter (#ad) set (578 pieces), a box inspired by The Rise of Skywalker movie and released since October 4th. As usual, I will remain very careful about the set’s content fidelity with what we will see on the screen next December and we will just take this product for now for what it is: yet another Y-Wing representation with LEGO sauce and a few characters.

There are also many versions of the Y-Wing at LEGO. “Classic” versions, model based on The Clone Wars, UCS, Microfighters, I think we’ve done a lot of work on the subject in the past 20 years and it’s always nice to get a little originality even if the starting point remains the same. 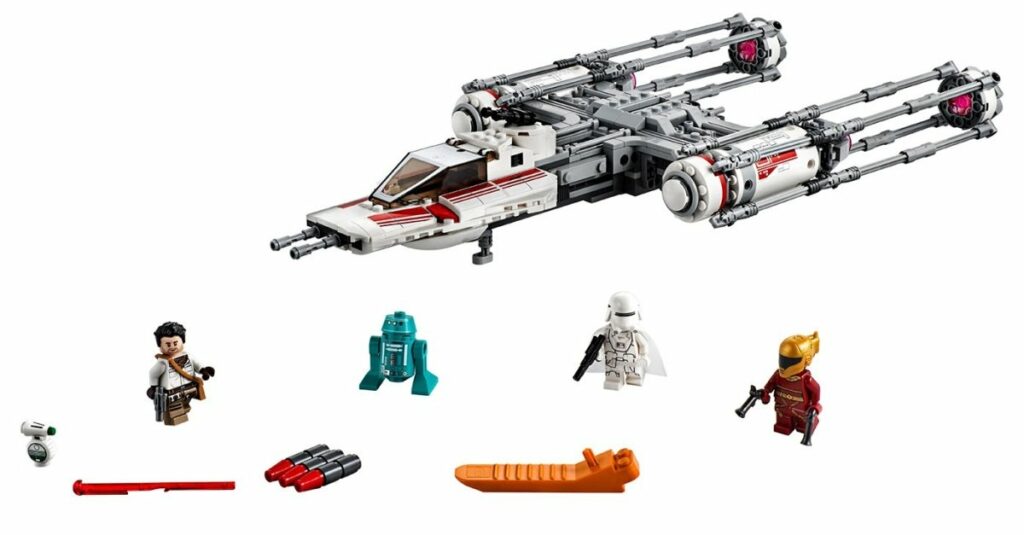 The advantage of this new version is to get out of the color scheme usually used for this ship. So we end up here with a red and white livery that will justify the purchase of this box without thinking that it is still a classic Y-Wing, whose design would have been redesigned to better meet the requirements of today’s fans.

A few Technic parts for the mainframe, a cockpit that gradually takes shape according to the different stickers to stick on the cabin, a pad-printed canopy that allows you to refine everything and you’re there. There is nothing very complicated to assemble here and the younger ones should be able to find their way around.

It will be a little less obvious when it comes to affixing the different stickers that give the ship a little personality. These are large stickers that must be carefully aligned so as not to ruin the look of the model. And that’s when we see that LEGO has a problem with white. Off-white, creamy white or immaculate white, all shades go through it and the result is not very accomplished. The pieces are not white, the stickers are. The difference in color is visible and disappointing. 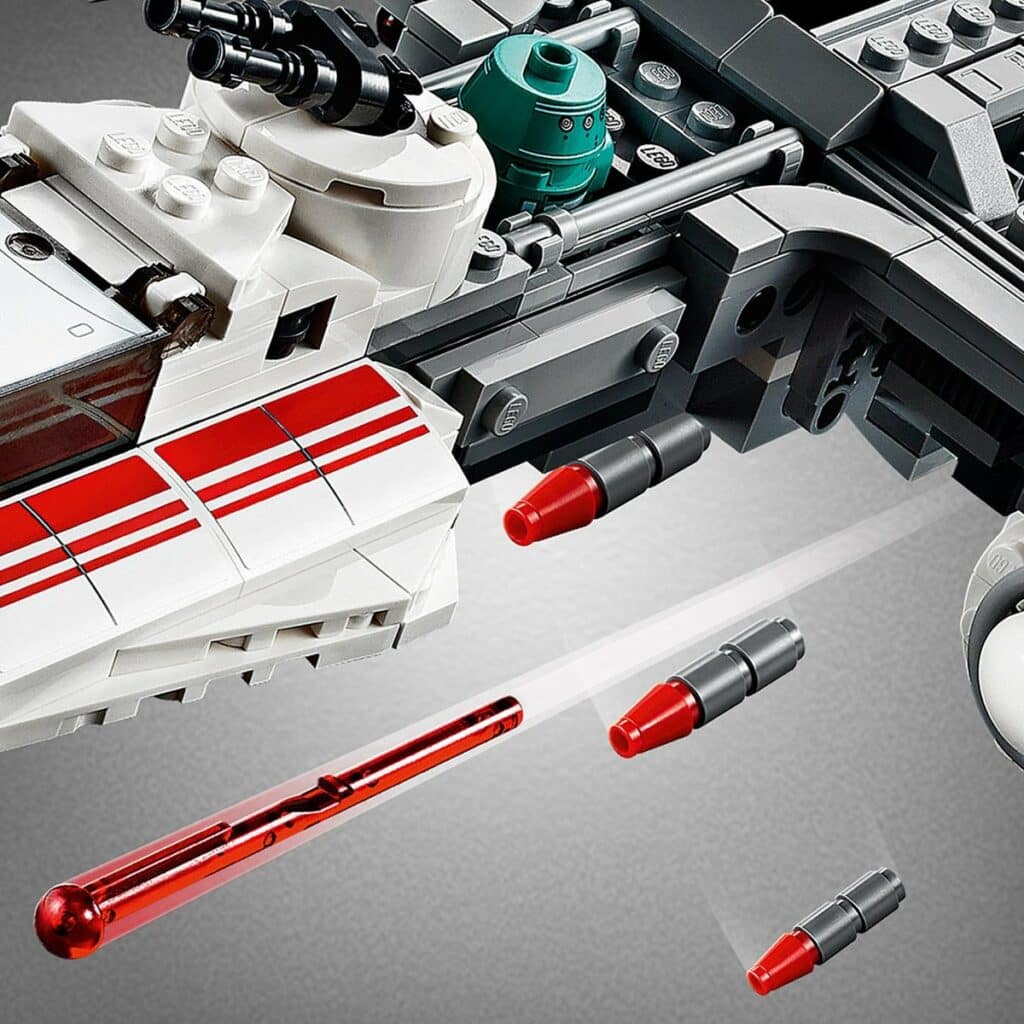 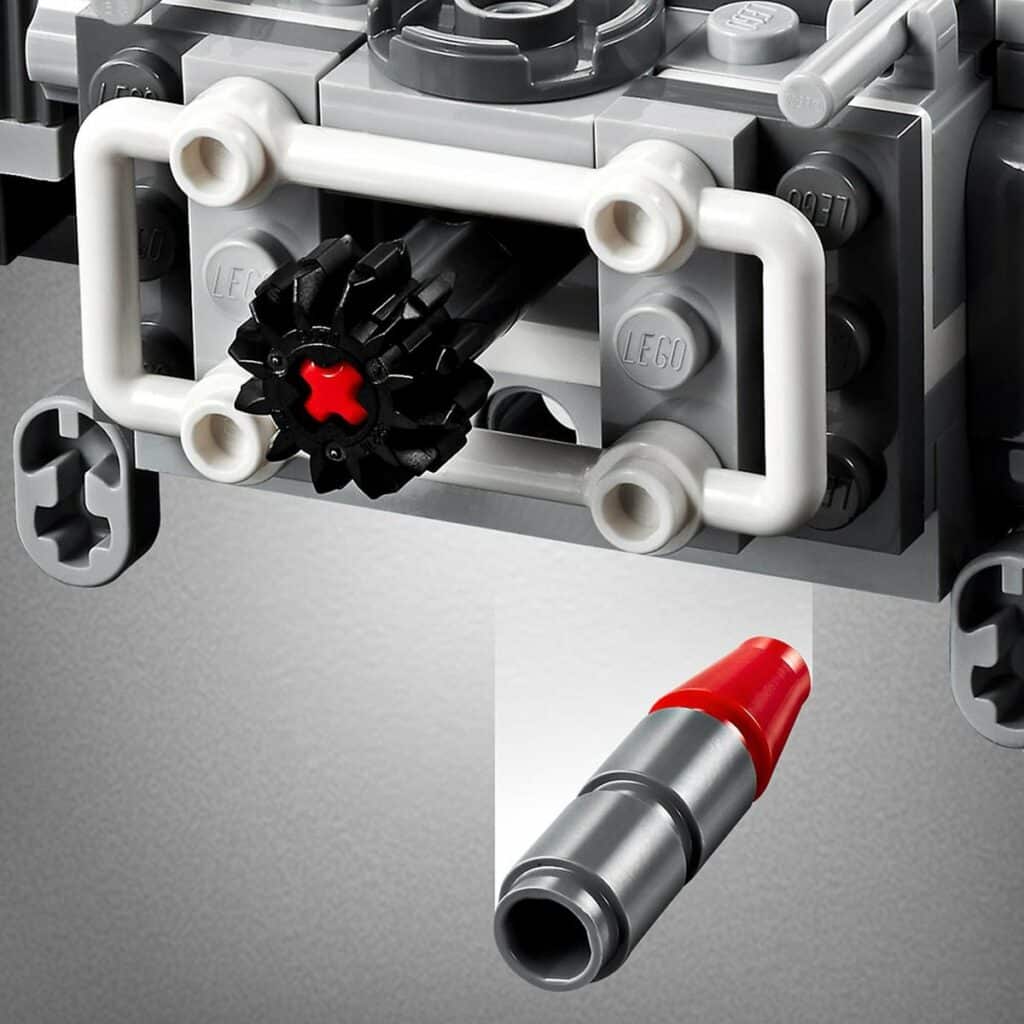 If the canopy of the vessel is not new, the pad printing of the part is specific to this model.

The two reactors are also quickly assembled with a few steps that are logically repetitive as desired. The whole is rather solid and easily handled, even if the “branches” of the reactors will sometimes tend to unplug unexpectedly. The final result is visually very correct with appreciable attention to detail for a model at this scale.

A satisfying detail: The presence of three landing gears, certainly rudimentary but retractable during the flight phase, which gives the ship a bit of a look when it is placed on the corner of a shelf.

As for playability, there’s plenty of fun to be had with two rather well-integrated Spring-Shooters who eject their projectiles with simple pressure on the missile’s tail. In the center of the ship, there is a bomb bay that stores three rounds of ammunition, which must then be released using the wheel at the rear. The integration of the storage mechanism is successful and the knob does not disfigure the whole system.

The cockpit is a little cramped, you have to orient Zorii Bliss’s helmet so that the rear growth of the accessory goes under the expected stall. The astromech droid finds its place in the usual place, as usual in a position that is not the one seen on this type of ship but we will deal with it.

The supply of mini-figures is rather interesting here with a Snowtrooper, Zorii Bliss, Poe Dameron, an astromech droid and the small droid D-O. Not surprisingly, the Snowtrooper reuses elements already seen in other boxes since 2015, including the Lego Star Wars 2017 Advent calendar.

Zorii Bliss is a character about whom we don’t know much at the moment, but at least we know that it’s the actress Keri Russell (Elizabeth Jennings in the series The Americans) who is hiding under the suit. If the character does not remove his helmet from the whole film, the neutral head is justified. Otherwise, it’s a shame. LEGO does quite well with the plastic version of the helmet worn by the character in the film. It’s bulky, but it’s in line with what we’ve seen so far on the various promotional visuals provided by Disney.

Poe Dameron is delivered here in a new outfit, seen in the trailer of the film, with an adventurer’s shirt and a bandana around his neck. The character’s head is not new, it is the one seen so far in a good half a dozen sets. Logically, Oscar Isaac hasn’t aged much since The Force Awakens.

About the two droids provided, I’ll just make two comments: I don’t know what I expected about D-O, but I’m a little disappointed by the Kinder figurine delivered here even if it seems difficult to do otherwise. The astromech droid seems almost successful, except that if you look at it more closely, you realize that LEGO is trying to solve the problem of pad printing a white area on a darker background by applying two layers. It’s a failure, but we still need to align the two layers of white correctly.

Overall, I am seduced by this box which offers an original, detailed and playable interpretation of the Y-Wing. I am also a little disappointed by the usual technical defects that LEGO is still not trying to correct to offer a top-of-the-range toy. 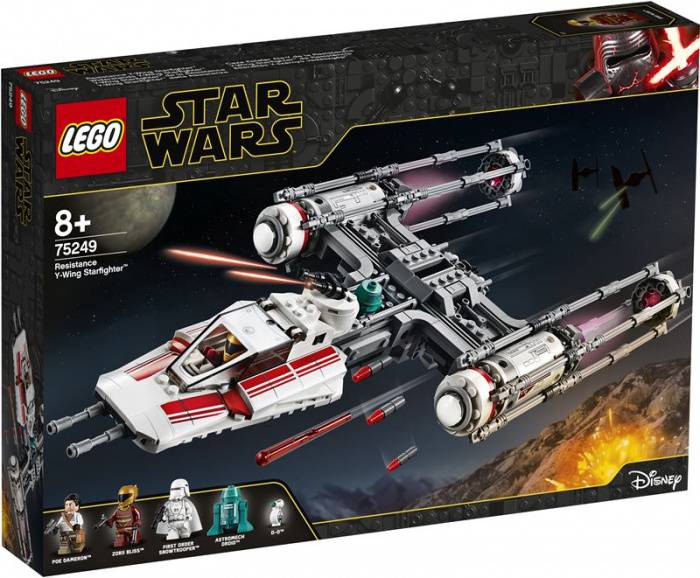 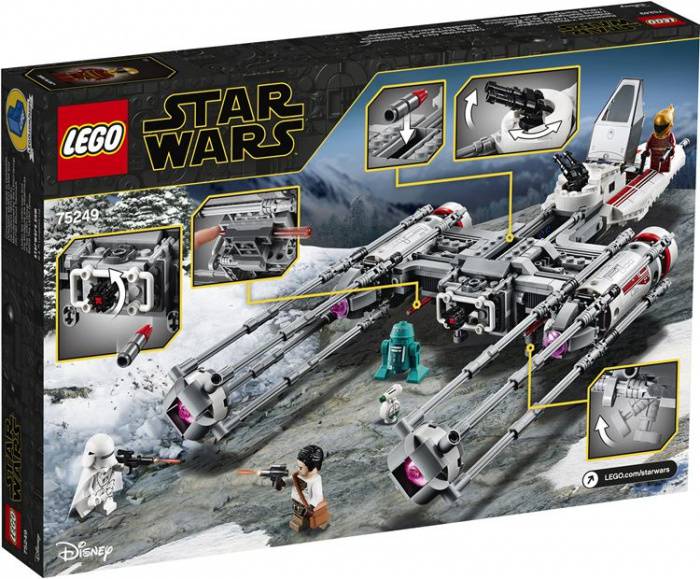