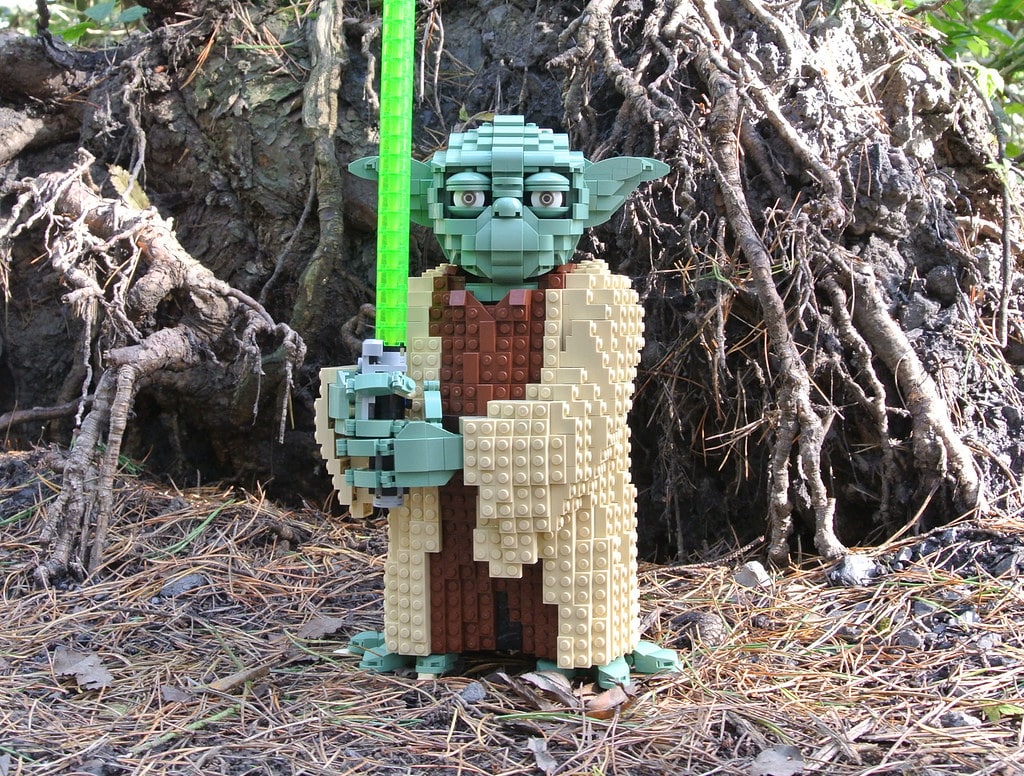 For the past 2 years, LEGO has offered us some emblematic characters reproductions from the Star Wars saga on an impressive scale. After the set 75187 – BB-8 (2017) and the set 75230 – Porg (2018), it is a Jedi master who joins this collection with the set 75255 – Yoda. I am not fortunate enough to have the earlier version of the character, proposed in 2002 under reference 7194. 17 years later, I therefore suggest you discover this new version of one of the main characters in the saga.

On the front of the box, Yoda is shown to us from the front, in a spacecraft or space station: we can see a door in the background. You can’t see the top of his sword, the box being too small for that. On the back of the box, we see it… from the back two thumbnails show us the model’s “functionalities”: the eyelids and the movable head. One last one shows us the height of the character: 16” (41cm), including the lightsaber.

Inside, we find 13 bags of numbered pieces, and a 14th containing some large ones. We also have a 224-page instruction manual for 547 construction steps, and a “descriptive ” sticker that doesn’t tell us much about Yoda.

Reading the set’s specifications, we will first notice that it has 1771 pieces. To avoid ruining anything, we find in this box a nice collection of rare pieces of which, as you guessed it, quite a bit of sand green color. 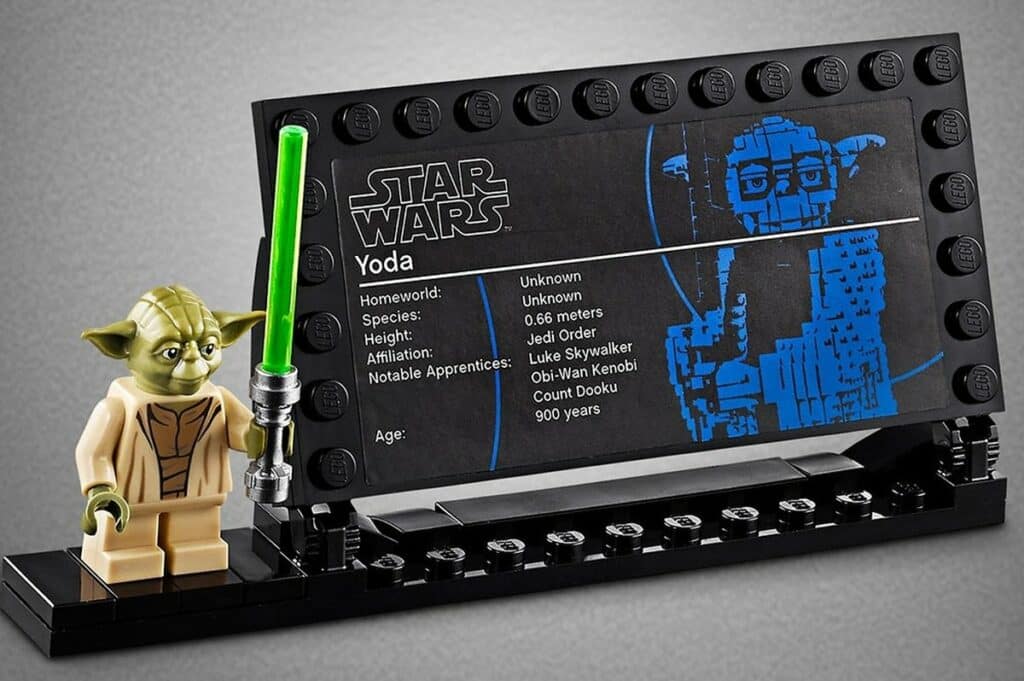 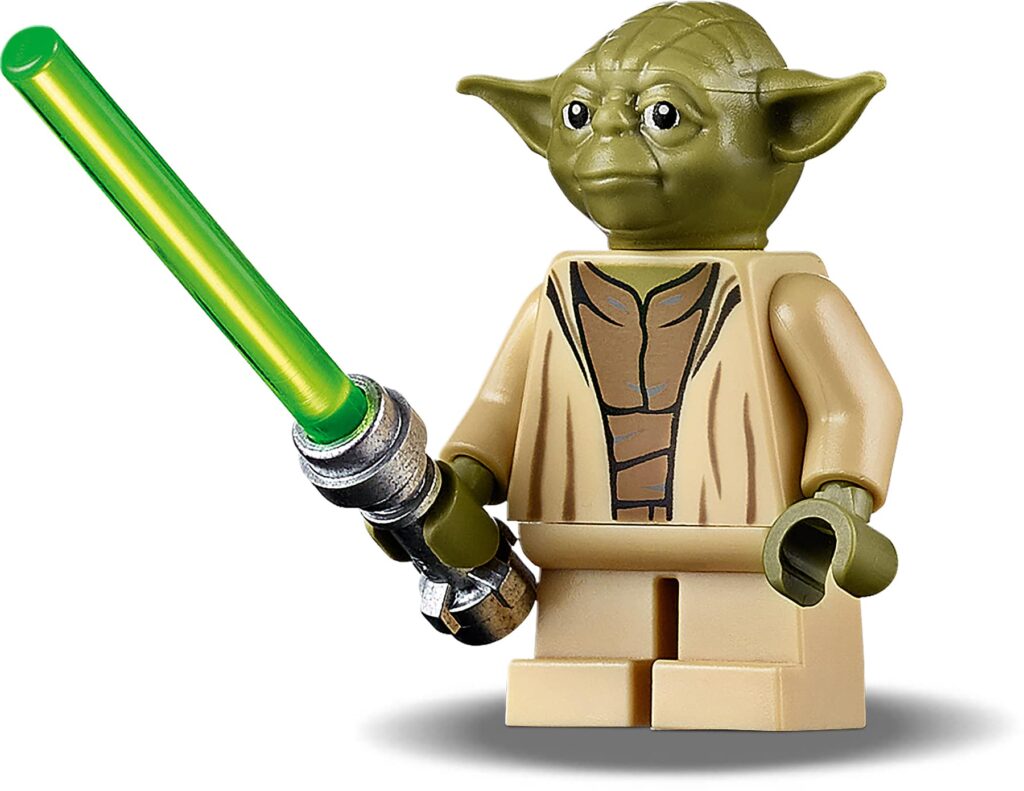 It is these sets tradition to offer us the mini-figure of the character represented. We find here Yoda as we have seen it in 3 other sets, the most recent being the reference 75233 – Droid Gunship released earlier this year. Nothing special to report, we find the Jedi Master in the outfit we are used to seeing. Above her small non-articulated legs tan color, we can guess some folds on her tunic. The face is smiling, and shows some grey hair on the back. He has his green lightsaber, luck was on my side: no bubbles to report.

We could have appreciated a more exclusive mini-figure, but with a character like Yoda difficult to do something really different. A mini-figure that does the job, no more and no less.

This begins with the “sculpture” internal structure. It is, for the most part, composed of Technic frames and blue pines on which the various elements will be fixed. We add, in the lower part, the two feet of the character. In the upper part, there is a system for fixing the head. Its design allows to keep it mobile once assembled.

Like the two previous “sculptures”, sets 75187 – BB-8 (2017) and 75230 – Porg (2018), the different faces of the structure are then covered. Care should be taken when following the instructions: many parts of the same colour will be superimposed. LEGO helps us here with two “tricks”: some coloured parts are hidden inside and allow easy identification; and the instructions surround the parts added at each step in red.

We start, with the bags bearing the numbers 2 and 3, with the torso and more generally the front face. It consists of a mixture of reddish-brown and tan pieces, with a slight projection on the left side from which a Technic bar protrudes. The character’s left hand will later be fixed on it.

Bags 4 and 5 allow the tan-coloured subassembly to be assembled and then fixed on the left side. There’s nothing special to report here: most of us are just piling up plates and, to tell you the truth, it’s not very exciting. It should be noted, however, that the relief provided by the shoulder and left arm is very nicely rendered, and that all this is perfectly connected to the previously assembled torso element.

You will have understood it, we then put the cover back on the right side. Small variation here: this side integrates the right sleeve, and the character’s hand. There are two grey Technic pines that will receive it later. For the rest, we assemble tan-colored plates. Here again, we will notice the superb work on the sleeve, very ample and “falling” under hand.

We then move on to the 8th bag which allows us to dress the last face of the structure: the back. On this side is the hood, again very nicely made. After fixing this element to the back, a last element is built. This one takes place at the level of the neck and makes it possible to “connect” (even if there is no physical connection strictly speaking) the elements placed on the 4 faces of the structure.

We have then finished with the covering of the structure. If this is the longest stage of construction, it is not really the most interesting. Fortunately, what awaits us next is much more so. We then move on to the head construction, and more particularly to the internal structure of the front part of the head. 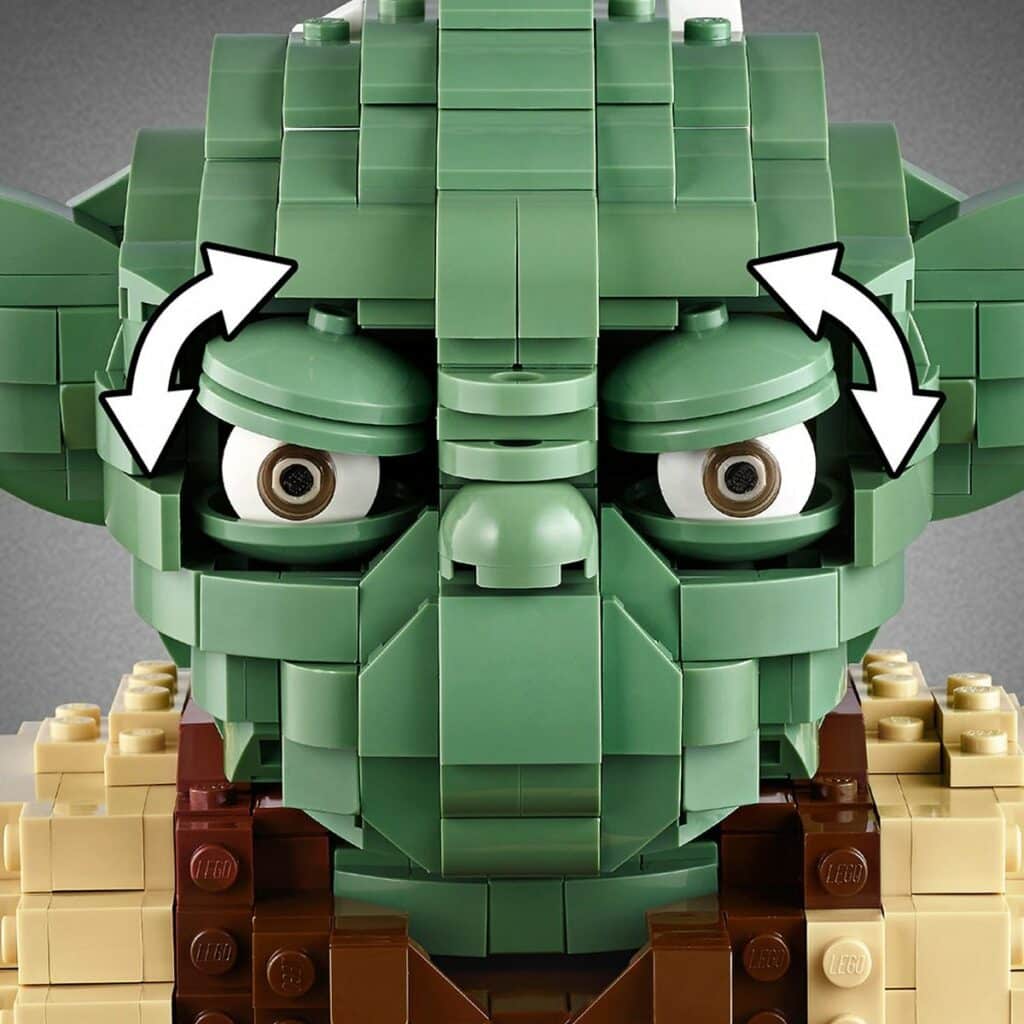 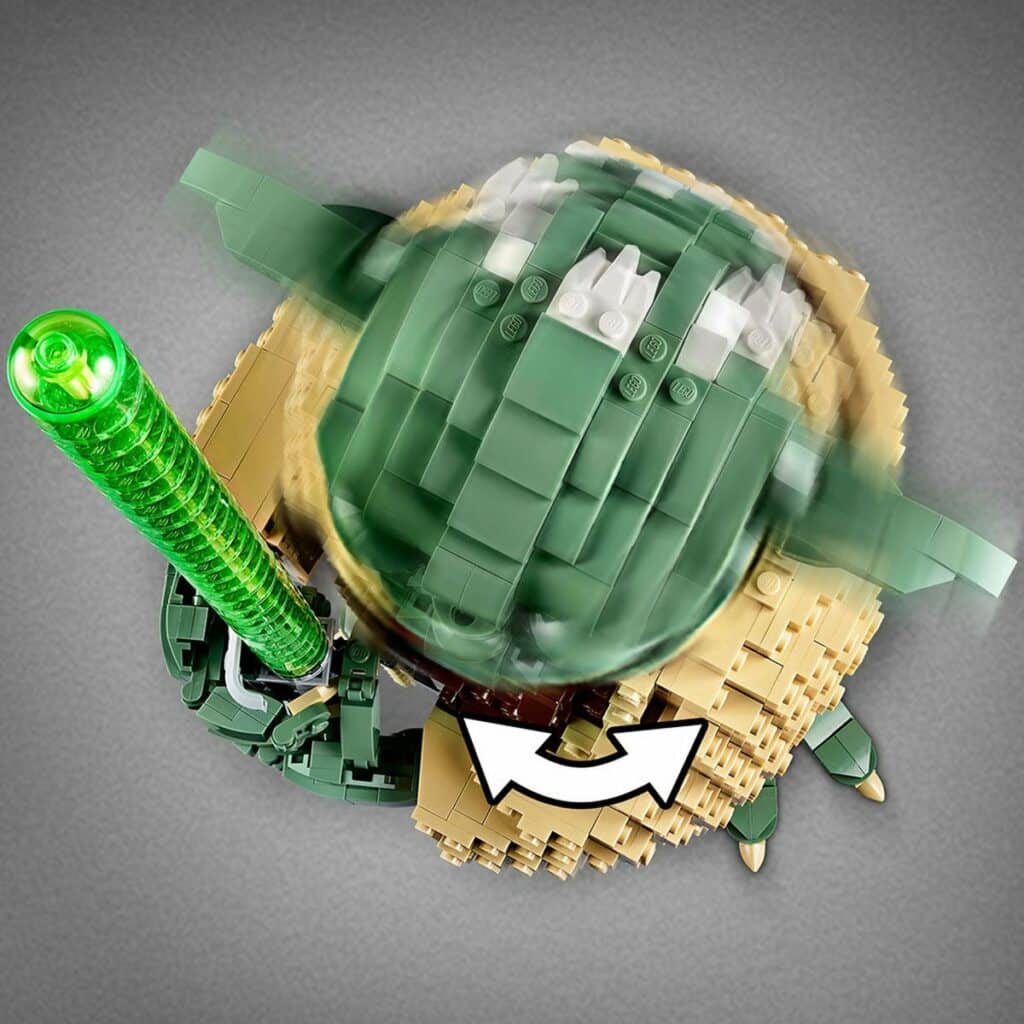 It’s with this ninth bag of pieces that we put our eyes together. Its design is interesting: the white of the eye is a white plate, the iris is a round translucent tile and the pupil a black bar that is attached to the center of the plate. The eyelids are mobile: they are simply attached to the black bar.

The following bag of pieces proposes to build a first sub-assembly for the mouth, then a second one for the chin. Then we move on to the cheeks, each made up of two sub-assemblies fixed on the SNOT bricks left there during the previous step. We then build the two ears, identical to the symmetry. In this stage (as in almost all head construction stages) there are many interesting sand green elements.

The front face of the head is then finished with the only missing element at this stage: the top of the skull. It is still a subset, which is then reported on the structure. The head is then fixed to the rest of the body with a Technic bar.

Once the head is fixed, the back of the skull can then be taken care of. After adding a few parts directly on the head, we build (again) a sub-assembly that we attach to the structure. It is on this side of the skull that some grey hair can be found. These white pieces bring a little variety to the construction.

We’re tackling the 13th and last bag of pieces. This one begins with the Yoda’s right hand construction, which is being saved for the moment. The lightsaber is then built, whose rigidity is ensured by a large white Technic axis (32 pins). The rest is essentially an overlap of translucent round bricks, ending with a dome. Note the care taken with the handle, even if it is finally not very visible in the hands of the Jedi Master, until the small button to turn it on. The right hand is fixed to the sword, then the whole thing to the character. The construction is completed with his left hand, whose fingers are folded over the handle of the sword.sword.

All that remains is to build the small signage support and attach the min-figure to it. I’m rather skeptical about the usefulness of the sticker proposed here. Be careful however when gluing the only sticker of the set, remember to use soapy water if necessary to be able to place it correctly. 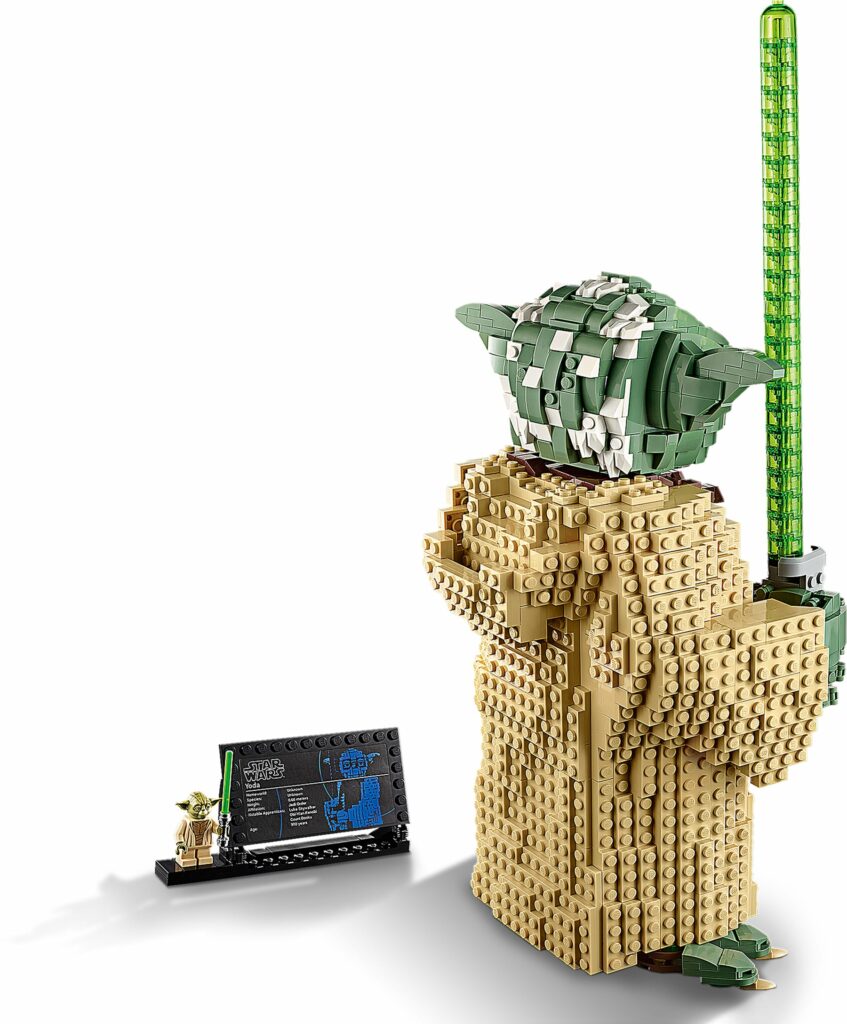 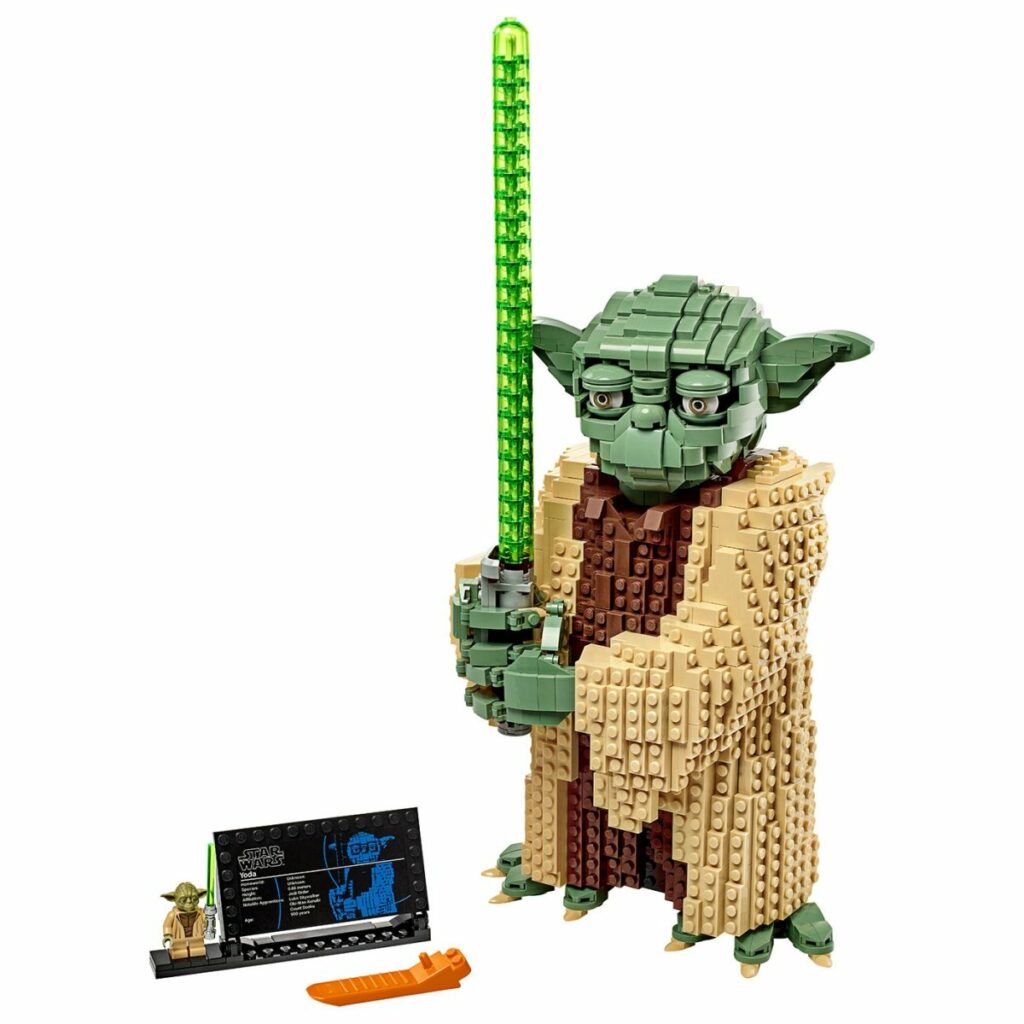 Despite of its 1771 pieces, the construction is quite fast. It takes about 4 hours to finish. This is due to the 13 numbered bags that avoid the classification step, but also to the instructions that shows us in red the pieces to be added. The construction interior also hides some colored parts that make it easier to find.

As you will have understood, the beginning of our assembly is not exciting. The 4 “faces” of the internal structure are made one after the other, and are limited to stacking plates most of the time. Fortunately, the head construction is much more interesting. Its design is clever and gives a prominent place to SNOT techniques.

The design is very good. We have here a real sculpture of the Jedi Master. Notice the attention to detail, reaching the point of representing the dark brown belt hidden behind the character’s hands. It is easy to guess the folds of the robe and the arms hidden underneath.

The designer even took the trouble to create a void under his hands and in the hood, reinforcing the “fabric” look. The lightsaber is also very nice, with a great job on the handle and a button that falls just under Yoda’s finger. Let us not forget the face which, not to mention the eyes is amazing with its wrinkles, cheeks and the serious look that characterizes the character, not to mention the eyes.

There are still some imperfections, the most obvious is the way eyes are made. They lack “cover”, there are still large holes in their orbits. I would have preferred the eyelids to be fixed and the problem solved. The discs that represent the eyelids are also very visible. Some occasional small improvements would also have been possible: I find his fingers a little stunted, and the color of his face is questionable. If the mini-figure is olive-green, the one of the big Yoda is sand green.

The supplied mini figure is a joke, as is the nameplate. Being a “key” character in the saga, the latter was expendable. Especially since it doesn’t teach us much. LEGO has become used to providing us with a mini-figure with these sets, as with references 75187 – BB-8 (#ad) (2017) and 75230 – Porg (#ad)  (2018). This explains the Yoda’s presence here, delivered in a very standard version.

The two set features can be summarized as the possibility of slightly turning the head / guiding the eyelids to give a weakened or determined look to the Jedi Master. In this sense, the statement “10+” in the box is misleading. Due to the lack of playability, this is clearly intended for collectors who want to add a beautiful representation of the character to their collection. Absolutely not for children, who are likely to be bothered once the construction is completed.

I will end this conclusion with the fact that, this one also contains many interesting pieces including a beautiful selection of sand green colors. To summarize my thoughts, you will find with this set a convincing representation of the cult character, which any fan of the saga must add to his collection. 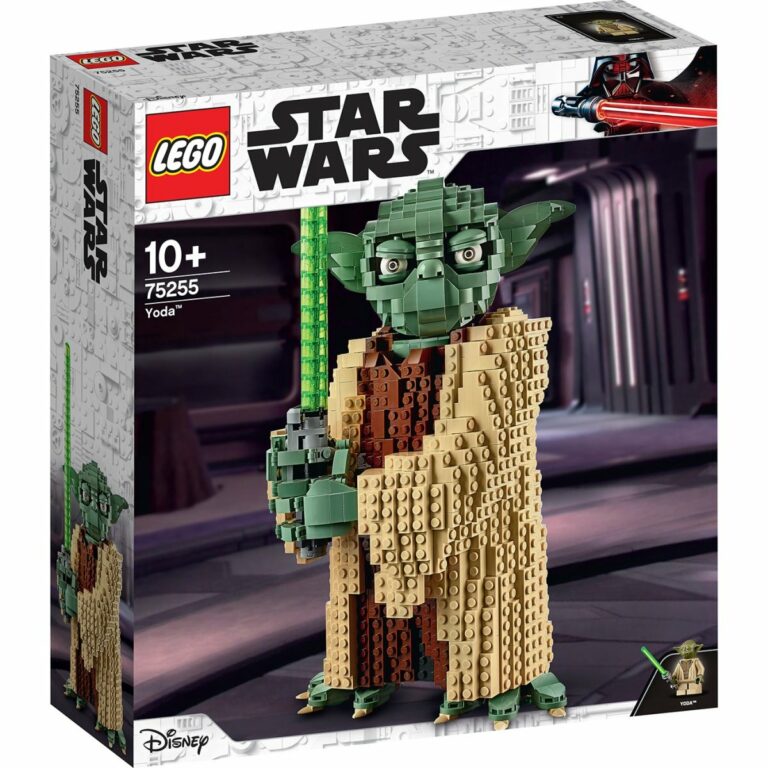 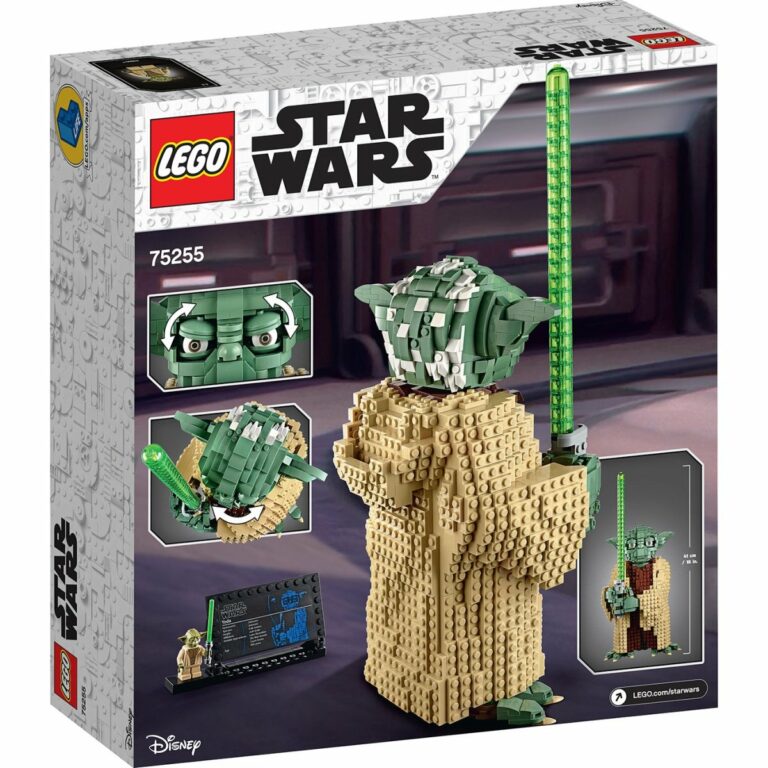