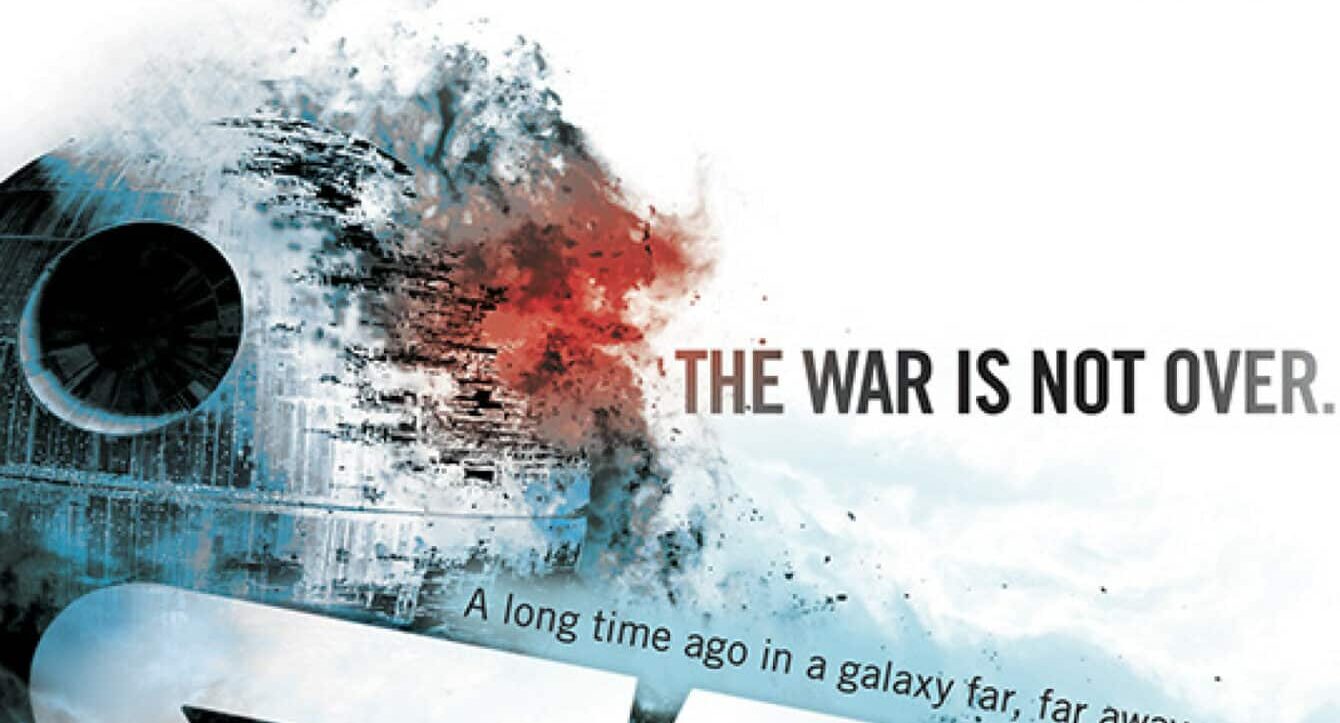 Star Wars Aftermath by Chuck Wendig is the first official canon book to show what happens after Episode VI – The Force Awakens. Find out what’s left of the Galactic Empire and the former Rebels, now responsible for building the New Republic.

When writing about Star Wars: “Heir to the Empire“, I mentioned the most interesting thing in the book was to see that Emperor Palpatine’s death did not necessarily mean the end of the Galactic Empire.  However, the story created by Timothy Zahn takes place five years after The Return of the Jedi and already introduces us to a reasonably well-established New Republic, skipping the more immediate effects of Palpatine’s death.

With the “reboot” promoted by Disney after buying Star Wars, “Heir to the Empire” is no longer part of the saga’ canon, which allows other authors to have their own versions of what happened after the Episode VII – The Force Awakens.

And that’s what Chuck Wendig does in Star Wars: Aftermath, in the first official book of the new canon. 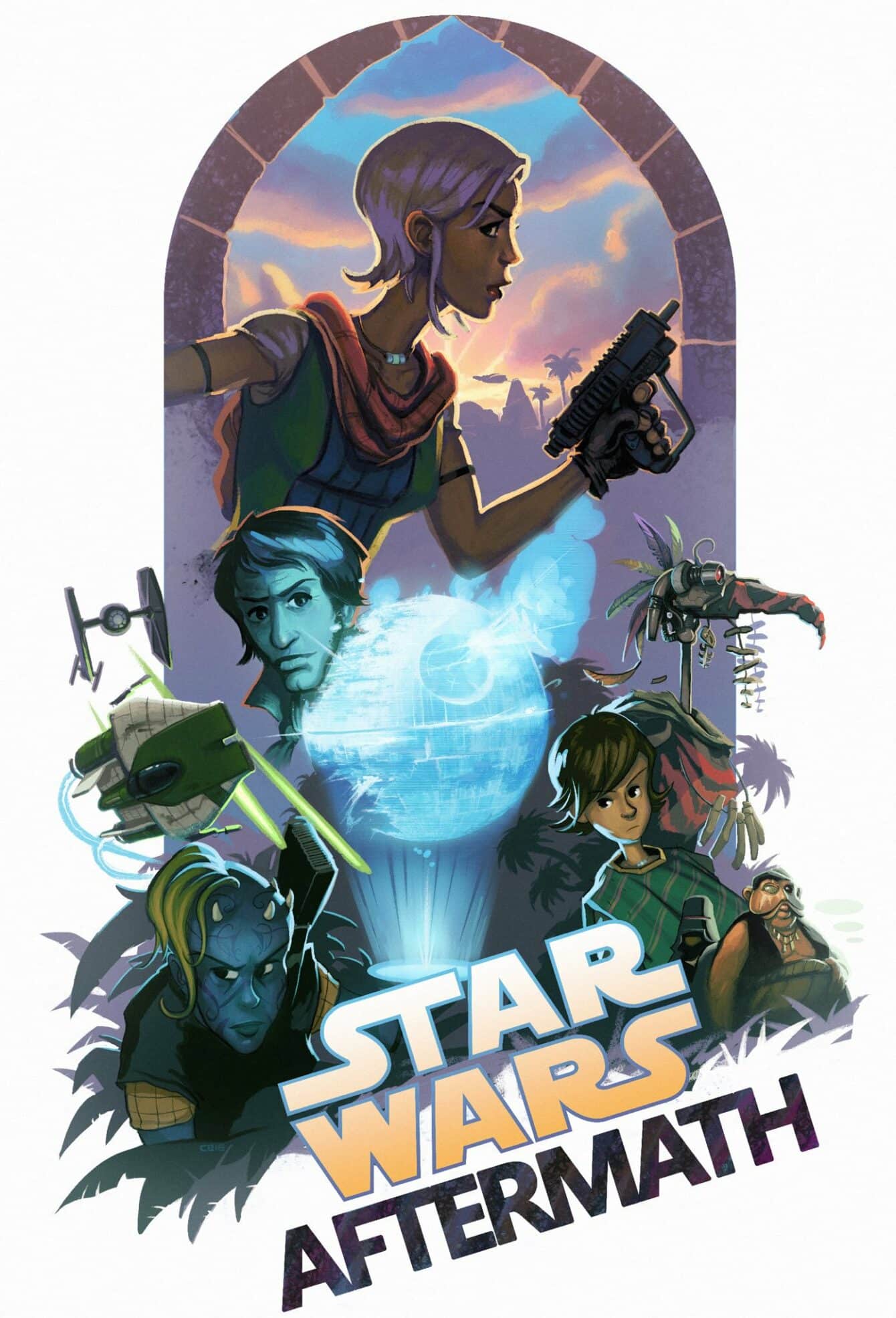 From the book’s first pages, it is clear that the days after the Battle of Endor were days of great tension with political and social chaos. The New Republic’s struggle to maintain order in the galaxy after the fall of the Empire – which kept crimes under control with a rigid and oppressive fist – is very well addressed by Wendig.

One of the many important questions raised by the book is the extent to which the imposition of order by violent and inflexible means is justifiable after a major political revolution. In fact, is there really a time when such violence is needed? Chuck Wendig‘s book effectively captures a certain lack of orientation and organization atmosphere, using a mosaic approach, slowly uncovering the galaxy’s scenery.

The author has the ability to lead us through each scene, alternating points of view, in order to make us aware of each side of the conflict. As a result, both the imperial and the ex-rebels (at this point new republicans) have their motivations exposed. It’s really interesting to see a sci-fi novel approaching its story from a multitude of different points of view. In the movies, the Empire is portrayed as pure evil, hated by all outside of it, but in Aftermath we see a broader range of opinions

Aftermath, basically tells us stories about people, trying to return to life they had before the war (although many were born during the conflict that lasted for decades). In much of the book we follow the events from the Outer Rim inhabitants’ point of view. This more distanced viewpoint of the great events gives the galactic war and its repercussions a much more human dimension. With this more comprehensive approach, Wendig brings us closer to the characters as they struggle to survive the chaotic period in which the galaxy lives.

At this point I think some of you are already asking yourselves: Okay, but what happened to Leia, Luke and Han? What I can say, without spoilers, is that some of them still gonna show-up from time to time. They are used by Wending mostly for capturing the big picture of the main story, which is set in Akiva, a world in the Outer Rim.

This is not a bad thing, because it offers space for new characters to grow and gain a life of their own, giving the reader time to get interested and involved with their own stories. That said, Aftermath is about the rebel pilot Norra Wexley, her teenage son and robotic genius Temmin, his android Mister Bones, the bounty hunter Jas, the Imperial Loyalty officer Sinjir, and the Imperial Admiral Rae Sloane. 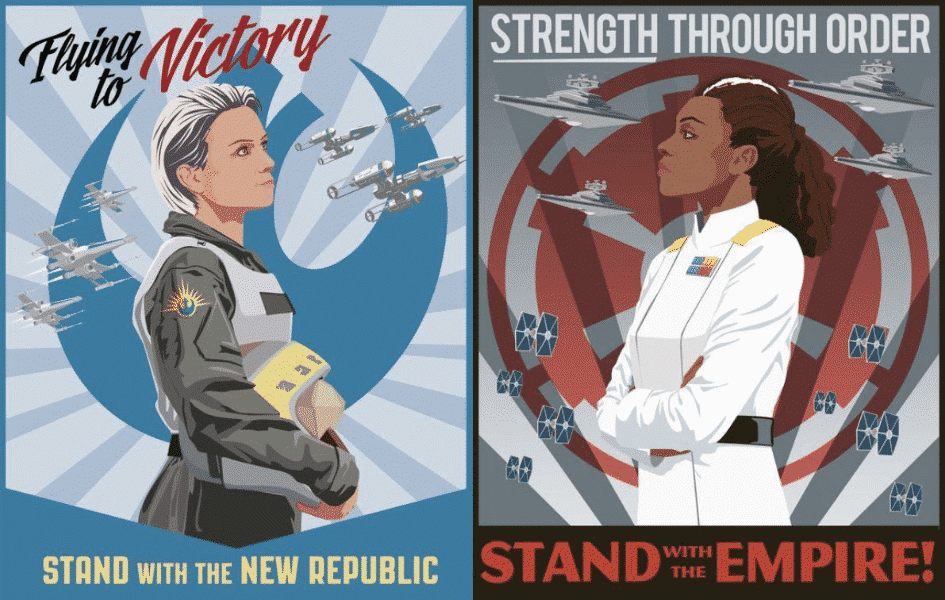 Meet the most important characters 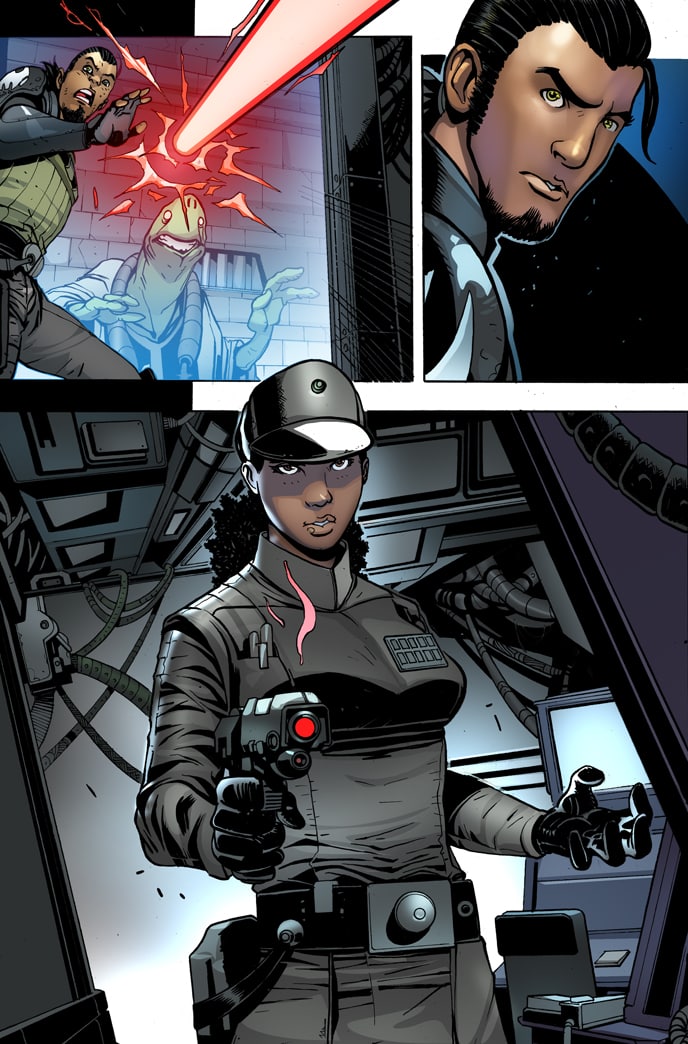 Rae Sloane stands out the most. The Grand Admiral is in charge of the imperial fleet’s last destroyer, and her military power gives her a strategic position within the Empire. Sloane was first seen at the beginning of her military career, in the John Jackson Miller’s novel A New Dawn, and she is one of the most important characters in Star Wars’ new canon. The empire never gave her the chance to be part of the most important galactic war battles. The empire has never give her the opportunity to fight in the most important galactic battles, so she’s looking for an opportunity to prove her value.

Norra Wexley is a pilot of the Rebel Alliance. It is through her that we follow the difficult adjustment of a warrior after being part of a major conflict. Besides having to live with all the traumas caused by the combat, Norra has to learn how to deal with Temmin, from whom she stayed apart for three years. On top of that, Norra still has to deal with a conflict between her duty as a rebel and her role as a mother, when a situation occurs in which she is the only one available to resolve it: to rescue Captain Wedge Antilles, who has been captured by Admiral Sloane at the beginning of the book.

The narrative also shows the point of view of three other characters. Sinjir is a former imperial agent who has been fleeing the Empire since he saw himself on the wrong side of the Battle of Yavin. Jas Emari is a bounty hunter whose targets, since that same battle, have become the imperial ones. Jom Barrell is a New Republic agent sent to find out what is happening in Akiva. Their stories, as well as those of Norra, Temmin and Rae, will come together in a crisis that could have a major impact on the entire galaxy.

Jas and Sinjir are especially interesting: two dangerous and unscrupulous misfits. Their interactions in the story are very nice to follow and they become a couple of adorable hateful characters. In addition, their journeys show another side to the galaxy’s inhabitants: those who have been alongside the Empire and who, in this post-war period, have their convictions at stake.

If that wasn’t enough to conquer the reader, Marks of War has its own droid, like any other Star Wars. Mr. Bones is a combat droid modified by Temmin to be his personal bodyguard, and has a psychopathic personality with an impressive black humor. 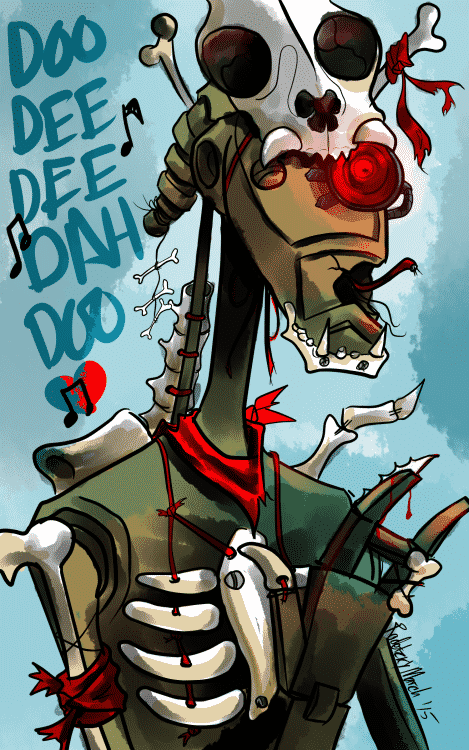 Aftermath has action-packed sequences at every turn: Mister Bones uses his weapons well on several occasions, the Wedge Antilles gets stuck in the Sloane’ Star Destroyer, Norra steals a TIE fighter at some point, Sinjir shows the brutal skill set that the Empire taught him; and there are also bounty hunters and Stormtroopers…

It is important to point out that Chuck Wendig already starts Aftermath with a lot of action. It doesn’t take long for us to be thrown into the midst of exciting space battles, which are narrated with precision, never ignoring their human element. This way, we don’t just witness ships shooting at each other, but what’s going on in the pilots’ minds.

Even the narrative’s political dimension offers enough tension to keep the reader interested in its unfolding. Controversial disputes can give rise to major war clashes and change destinies and affect countless lives. The weight of this responsibility is well conveyed by Wendig, when he focuses on figures such as Sloane, Ackbar and Mon Mothma.

And another thing that Wendig knows how to do very well is to move the characters around like in a complex board game. Each plot is developed with a certain degree of independence at the beginning, but always leaving room for us to sense its possible connection within a larger scenario.

Chapter 14 deserves to be highlighted in this regard. In it Wendig brings together all the main characters, giving a true lesson in well-written narrative, as it alternates between several actions occurring in different points in the story, that now cross each other. And, most importantly, described with such enthusiasm as the growing urgency of events demands, which makes reading exciting.

Aftermath is a book worth reading

Aftermath brings a story that respects the classic films’ legacy and expands the universe created by George Lucas. This is a Star Wars book made by a fan and for fans, capturing the essence of the original movies through pure action attack, also including previous references of the franchise and adding new interesting characters to the canon. It’s a wonderful addition to the expanded universe and, for all the reasons already listed, it is an essential book for all Star Wars fans. 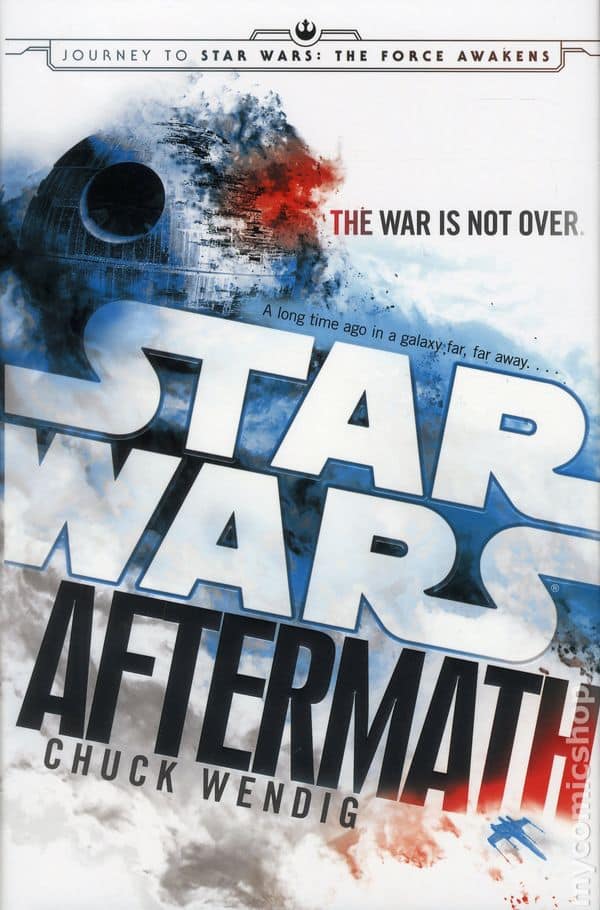