Through Ciena and Thane, you will follow the main events from the rise of the Rebellion to the fall of the Empire in an absolutely original and engaging way

Written by Claudia Gray, Lost Stars is certainly one of the most popular books in the new canon. Praised by fans and critics, the story is about Thane Kyrell and Ciena Ree and their lives since childhood in Jelucan, the isolated planet of the Outer Rim where they were born and raised, until shortly after the events of Jakku’s battle.

Much about the original trilogy events

If you are new to the world of Star Wars literature and have little or no knowledge of Star Wars materials other than the movies, this may be the perfect book for you to start reading. The story itself does not involve characters or situations appearing only in other materials such as animated series or other books. Everything you need to better enjoy Lost Stars is in the original movies.

Right at the beginning of the history we meet Thane and Ciena  who are united by their mutual passion for flying. Together they join the Imperial Academy where their different beliefs and values make them have completely different perspectives on the galactic government. The book focuses on their relationship, what they feel about each other and what happens to them when they see themselves on opposite sides of the conflict.

The book leads us through the original trilogy events, with the explosion of Alderaan, the Battle of Yavin that unveiled the first Death Star, the battle in Hoth, the Empire’s passage in the City of Clouds and also the Battle of Yavin 4, filling holes in history that are not explored in movies at all times.

With the book, the knowledge about the Rebel Alliance, its bases, strategies, Hoth’s movements to the Liberty ship is expanded and we also know more about the X-Wings squads. Encounters with Grand Moff Tarkin, Darth Vader, and Palpatine himself also occur.

It also explores the Imperial fleet backstage, with details of the ship’s interior dynamics, how the Empire reinforces its ideals – often through fear – and we also learn a little about the faces underneath the Tie-Fightes and Stormtroopers pilots.

The other side of rebellion

Have you ever wondered how the Alderaan or the Death Star destruction impacted the imperial officers’ lives? Or what even makes someone continue to work for the Empire? These are all questions addressed in the book. And even knowing what will happen at certain times (because we already know the films), we are still surprised by the context and human reactions of the characters.

A new vision of rebellion has emerged in the new canon works, showing it as a noble yet imperfect movement. The new narrative about the rebellion it ‘s present even in films such as Rogue One: A Star Wars Story, in which Cassian, a rebellion pilot, kills when he has to in order to carry out the will of his leaders. Also in The Rebels, we see Ezra questioning Saw War in the same way for his “extremist tactics”.

Lost Stars is no different, but because it has strong comparisons between the Empire and the Rebellion, the book proposes the answer to this question, illustrating not only the similarities but mainly the differences between the two and finally answering what distinguishes the rebellion from the imperial ones themselves.

There's no good or evil

Another very interesting point in the book is that there is no assumption that the Rebel Alliance is the good that must be followed and the Galactic Empire is the evil that must be defeated. Here the classic “good and evil” does not exist. The focus is on showing the main consequences the war has brought to Ciena and Thane and to the entire universe.

When watching Star Wars, does anyone really think about the fact that Luke blew up the Death Star with millions of people inside? Because that’s exactly what happens in the movies.

Are all the people who follow the Empire really bad? No, not all of them. These are some of the approaches in the book that are essential for understanding the relationship of the main characters. Oh, and all this with a lot of Star Wars style action!

Lost Stars is a book worth reading

Not only a well-written novel with very well-developed characters, the story is also a gift to Star Wars fans, offering different perspectives for the big events of the Original Trilogy. Claudia Gray, manages to maintain the narrative in a simple and captivating way, placing the story in context through the important events during this period of time.

The book is, in fact, simpler for those who are used to the expanded universe (legends or canon), but if you haven’t ever read a Star Wars novel before, Lost Stars is a great place to start! 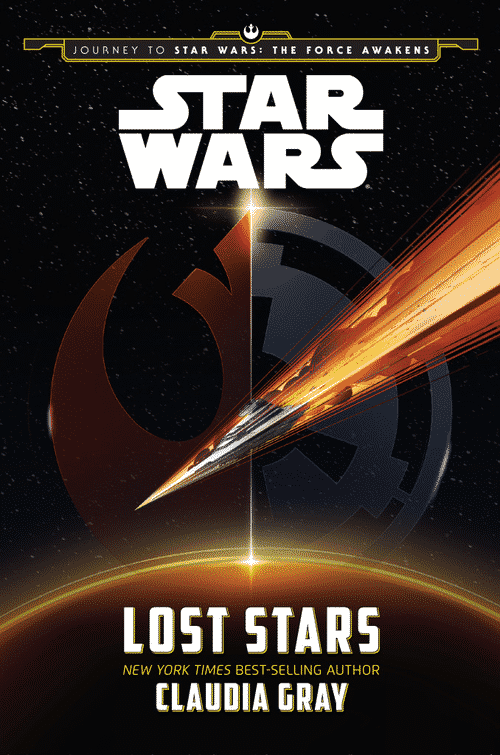