Most Valuable Collectibles in Star Wars [The Action Figures]

Star Wars collectors are the most passionate people I have ever met, and I ought to know because I’m huge Star Wars fan. Star Wars collectibles are a powerful way to uniquely celebrate what the saga, and its most enduring characters, mean to generations of fans, especially the most valuable collectibles in Star Wars: The Action Figures.

It’s easy to browse the Internet and find Star Wars items that are currently collectible. But predicting what will be the next big collectible thing is more difficult.

Look at what is collectible now and why. Items in original packaging and mint condition are more valuable. Rare items retain their value more than mass-produced ones.

The problem with predicting what will be collectible is that the value of items is based on the whim of collectors. So, a item that’s valuable today may go out of favour tomorrow.

If you have vintage Star Wars in your collection hold on wheel. It’s only going to increase its value.

Any given Star Wars action figure is worth whatever someone will pay for it, but experts agree on several notable examples that carry high value.

Last Year, two ultra-rare Star Wars figures of Darth Vader and Obi-Wan Kenobi where sold for a sky-high combined total of more than $100,000. The plastic action figures of the two Jedi Knights were made by toy manufacturers Kenner in 1978 – a year after the release of the first Stars Wars films.

The Obi-Wan Kenobi and Darth Vader models are sold for $65,000 and $55,000 and they came with a ‘double telescoping’ light saber inserted into their right hands. Those were the very first pieces made by the manufacturer Kenner.

Maybe thousands, of this double-telescoping toy were made in early 1978. However, due to safety concerns, the lightsaber soon had to be redesigned as one solid piece of plastic

As a result, only a limited number of the Star Wars figures with the telescoping lightsabers were made, making them incredibly rare today.

In July 2019, at Hake’s auction house a rocket-firing Boba Fett action figure, an extremely rare item, has sold for $112,926, setting a new world auction record for a Star Wars toy.

This figure was a prototype toy made by toy company Kenner in 1979. The toy was expected to be released in 1980 for the Star Wars sequel “The Empire Strikes Back”, but never made it into mass production due to safety concerns with the rocket firing mechanism

According to Alex Winter, president of US-based Hake’s Auctions, only a handful of them have ever come to market and most prototypes were destroyed in the factory at the time.

The previous world record for a Star Wars toy was for another Boba Fett prototype that was sold in March 2018 for $86,383.

And it’s expected that in November there will be another Boba Feet prototype for auction, but in a different version, this one with a J-shaped slot and it is painted. So, the possibilities are open for a new record.

The toy, which attracted worldwide interest, was purchased by an American private collector.

At the time I am wrinting this article, Vlix, the world’s rarest Star Wars toy – althought most Star Wars fans will have never heard of him – is for sale at E-Bay, with a value of up $58,000.

The character of Vlix appeared in “Droids”, the short-lived Star Wars spin-off cartoon featuring the adventures of C3-P0 and R2-D2. 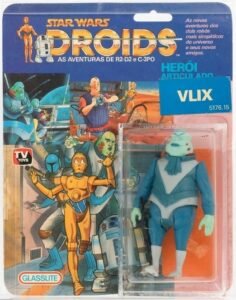 The show ran for just one season in 1985 and some toy moulds where made for a new Kenner’s line of products, but they were scrapped when the show was cancelled after 15 episodes.

Some of these moulds made their way to Glasslite, a toy company in Brazil, which held the rights to distribute droids’ figures in the country, which produced a limited number of figures, including Vlix.

It’s believed that about 2,000 Vlix figures were released before Glasslite ceased production. Only about 1,500 have been found and less than 100 are still in their original packaging

Of course, these represent some of the rarest and most sought-after Star Wars action figures. And though it’s certainly possible to find a diamond in the rough, the average value of sealed Star Wars action figures produced between 1977 and 1985 is around $80, with a range from $30 to $3,000. Some variants are worth up to $10,000 or more.

These values only apply to vintage Star Wars action figures – the average figure produced from the early 1990’s to the present is worth only a couple of dollars. They were produced in such high quantities that it killed the collector market.

Watch out for new collectibles

With the new movie coming up in December 2019, the vintage market for Star Wars is going to sky rocket.

But don’t discount all the merchandise from the new movie.

Companies like Hot Toys from Hong-Kong and Sideshow from California – In fact, this company is the official exclusive distributor of Hot Toys in the United States, North and South America, Europe, Australia and throughout most Asian countries.

If you really want to protect your investment for the new Star Wars movies you should direct your attention to exclusive and limited-edition products that are addressed to a collectible clientele.

HOT Toys Make the best action figures in the world

They are the best looking and highest quality on the market. They have been producing highly-detailed and realistic Star Wars figures, covering the entire Star Wars saga in 1/6 and 1/4 scales. They all look like as if the characters come straight out of from the movie. They are high ended, ultra-realistic and hyper detailed.

I absolutely love this stuff.

They are quite expensive but considered a worthy investment. Some collectors have been able to resell their toys for double the amount they paid for them.

One off the best examples is the DX07 Luke Skywalker Bespin Outfit Double Figure set.

It was my very first Hot Toys 1/6 Scale Collectible figure! Being a long-time fan of Star Wars, this was an obvious the best place to start!

As seen in The Empire Strikes Back, this is the outfit that Luke Skywalker wore for his brutal showdown with Darth Vader, an epic scene that ended with the mother (of is it father?) of all revelations.

This set quickly sold out, and almost tripled in value from its original $300 price, making it an absolute must have for the biggest Star Wars fans out there.