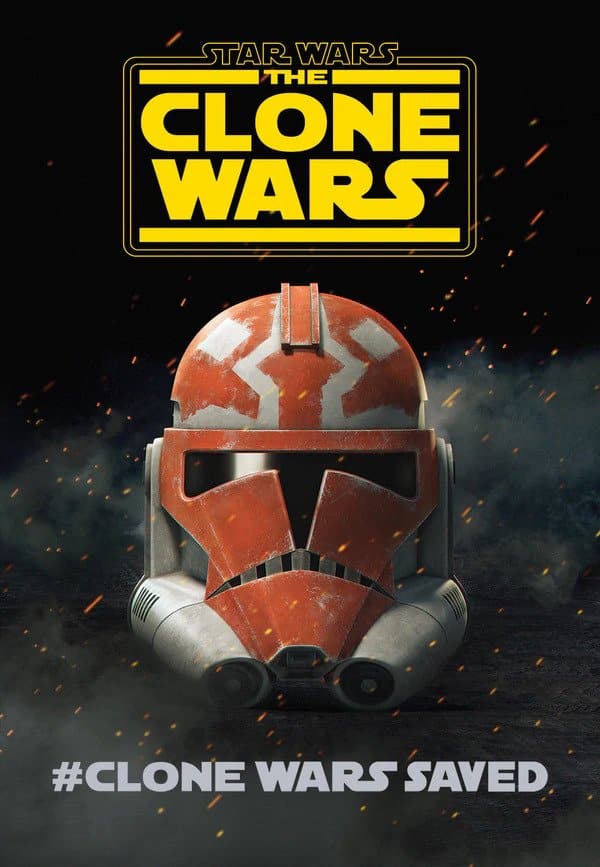 “Star Wars – The Clone Wars” is back and now we know when.

After several years, the animated Star Wars series The Clone Wars returns with a final season. The 12 episodes of season 7 will be broadcast soon. Disney has now revealed the official start date.

What is Star Wars: The Clone Wars?

The Clone Wars is a CGI animated series between the events Attack of the Clones and Revenge of the Sith. It revealed the intergalactic conflict Obi-Wan Kenobi, first mentioned in 1977 in A New Hope.

The show is named after the Clone Troops, created from bounty hunter Jango Fett’s DNA, who serve the Galactic Republic in its fight against the Separatists.

The Clone Wars began on August 15, 2008. Five seasons of 108 episodes were then broadcast until 2013. After Disney acquired Lucasfilm, the series was canceled. The sixth season, known as The Lost Missions, was up and running and it gave us 13 more episodes in 2014

The show is best known for the Ahsoka Tano introduction, Anakin Skywalker’s Padawan, who “represented equality,” according to her spokesperson Ashley Eckstein, and became one of the most popular characters of the franchise. However, he was never seen in a live-action movie.

Clone Wars has amassed legions of loyal fans – as shown by the many filled convention panels and the success of the #BringBackCloneWars movement – and provided a gateway to a distant galaxy for a new generation watching on the Cartoon Network.

When writer Brent Friedman stated in 2014 that the team had planned The Clone Wars until the end of Season 8, the cancellation left the several characters fates unresolved.

Some of these stories have since then been incorporated into entertaining novels like Dark Disciple, award-winning comic book series like Darth Maul: Son of Dathomirs, and unfinished online story reels, but others have not.

The main characters are Ahsoka and Darth Maul. The former left the Jedi Order to become a Free Agent after her appointment. She was almost sentenced to death at the end of the fifth season. At the same time, Maul was captured by his former master Darth Sidious and escaped in the Son of Dathomir comic book.

Up to now, it was only known that the series season announced for the streaming service Disney Plus will come sometime in February 2020. Now we know the exact date thanks to a promotional video on the official Disney homepage. The 7th season of The Clone Wars starts on Disney Plus on February 17, 2020. The episodes will be released in a weekly rhythm.

Unfortunately, Disney+ is not yet available in all countries. From 31 March 2020, international viewers will also be able to officially use the service and probably start the final season of “The Clone Wars” right at the start.

An epic battle against Darth Maul and Ahsoka’s fate

The new season is intended to give fans a conclusion to the events surrounding Anakin Skywalker, Obi-Wan, and Ahsoka Tano during the Clone Wars. Among other things, an epic lightsaber duel between Ahsoka and Darth Maul will be announced. In return, even stuntman Ray Park, who played Darth Maul in Episode 1: The Phantom Menace, supported the production. He promised one of the best duels we’d ever seen.

Also, during the season, Ahsoka will meet two new characters she will encounter on Coruscant’s infamous Level 1313: Trace and Rafa Martez. They are said to have a unique perspective on the Clone Wars.

At the start of the season, Ahsoka is still on a new, unknown path, which she took after her disappearance in season 6. The final season is supposed to bring a connection to the Rebels series, which makes the still young Padawan student a leader.

The new “Star Wars – The Clone Wars” trailer for Season 7 has arrived and offers new insights into the upcoming adventures of the heroes of the Star Wars saga.

The fans wanted it, and Disney makes it possible. “Star Wars: The Clone Wars Season 7” is coming up and will be featured on Disney Plus. During the current Star Wars Celebration 2019, there were various insights into the new season and a second official teaser trailer.

At this year’s Star Wars Celebration, all major titles from the franchise were served. Among other things, a panel for Star Wars: The Clone Wars took place. The series will get a new season, for which the producers revealed some details. This news could contain potential spoilers, so there is a mandatory spoiler warning at this point.

First of all, they talked about an epic lightsaber duel that will take place between Ahsoka and Darth Maul. To make this happen, actor Ray Park even helped to make this fight seem as real as possible. Filoni says:

“This is one of the best (duels), if not the best duel we’ve ever done.”

From there, Ahsoka meets two new characters, Trace and Rafa Martez, at the infamous Level 1313 on Coruscant. They are said to have a unique perspective on the Clone Wars. Eckstein makes it clear:

“These stories have exceeded all my expectations.”

Here some things already become clear: Padawan Ahsoka follows a new, unknown path after his disappearance in the 6th season. But she is still more of a teenager and not yet a wise leader. According to Filoni, everything is moving towards the Ahsoka, whom we know from Star Wars Rebels.

The plot around Mandalore and Maul Makeover

Many of the story details are by Filoni and George Lucas. That’s why Filoni explains that he always wanted to keep the DNA of the Clone Wars authentically alive, who considered Lucas to be a great mentor during all this time. The Siege of Mandalore arc, was, therefore, a challenge. The size is massive, but he would be happy with what he had achieved.

Also, Darth Maul will receive a visual makeover that will be similar to his appearance in Solo: A Star Wars Story. Darth Maul’s spokesperson, Sam Widower, is also excited about The Siege of Mandalore. He says:

“This is my favorite part we ever did with the character, and Dave wrote it very personally. […] What I found interesting about this arc. He tries (for a second) to rethink his way. He’s trying to do something different that he never tried.“

A release date for “Star Wars: The Clone Wars Season 7” is not yet available. However, at the end of the panel, there was a second official teaser trailer, which you can watch here:

This Is the Way. Celebrate The Mandalorian in Your Collection