The Beginning of a Successful Story: The Lego Star Wars Sets From 1999

In 1999, in a galaxy far, far away, the Lego Star Wars collaboration reached the lives of millions of children and fans around the world. The Lego Group is celebrating the 20th anniversary of this acclaimed range, which continues to unite fans of all ages and has inspired some of the greatest battles ever built.

Lego Star Wars was the first licensed franchise of the Lego Group and continues to be one of the most popular, giving fans of all generations the opportunity to share fun and stimulating construction exercises. Since its launch, around 700 different sets (including 1,000 Lego Star Wars mini-figures), five video games, several TV and Internet series and a multitude of fun merchandising items were released.

The initial proposal for the Lego Star Wars brand was presented by Peter Eio, President of Lego Systems, Inc. The film  Star Wars: Episode I – The Phantom Menace was on the horizon, and Eio saw an opportunity to make a partnership with LucasFilm. In North America the licensed toy boom had begun, and Eio was concerned that Lego would be left behind if it did not take some steps to adapt to this growing market.

In fact, Lucasfilm had already expressed interest in working with Lego. And while the feeling at Lucasfilm was one of excitement, the Lego executives were not very enthusiastic. After Eio presented his proposal, he recalled that “their first reaction to Star Wars was one of shock and horror”. For them, the very idea of Lego Star Wars conflicted with the company’s anti-violence policy and its tradition of developing ideas internally.

The Star Wars branding in Lego boxes in itself was a concern for Lego executives who felt that having the word “wars” appear next to the Lego logo would associate the brand with war toys – something the company had strived to avoid despite competitive pressure from the rest of the industry.

Since Lego’s brand image was a concern, Eio launched the idea as a fantasy battle between good and evil. He also led market research with parents that showed a very favorable reaction.

Finally, the owner Kjeld Kirk Kristiansen stepped in and gave the green light to Lego Star Wars and, in 1998, after almost six weeks of negotiations, Lego and Lucasfilm signed their licensing agreement. The partnership was formally announced on 30 April through Lucasfilm.

The relationship with Lucasfilm began with an exclusive nine-year licence to produce construction toys for the entire Star Wars galaxy. In 2006 after seven years of phenomenal success and retail sales of more than $1 billion dollars that license was extended until 2011, then 2016, and in 2012 the license was extended until 2022. The Lego Group referred to the co-branding as a year-on year “blockbuster success” and it continues to be one of their biggest sellers, especially in the United States.

The timing of the 1999 licence was crucial because it coincided with the much-anticipated release of three prequel Star Wars films telling the back story of the original trilogy released between 1977 and 1983.

The product line development quickly followed, leading to the prototyping and refinement of new assemblies, elements and mini-digits. At the International Toy Fair in New York in February 1999, Lego and Lucasfilm announced Lego Star Wars to the invited press. 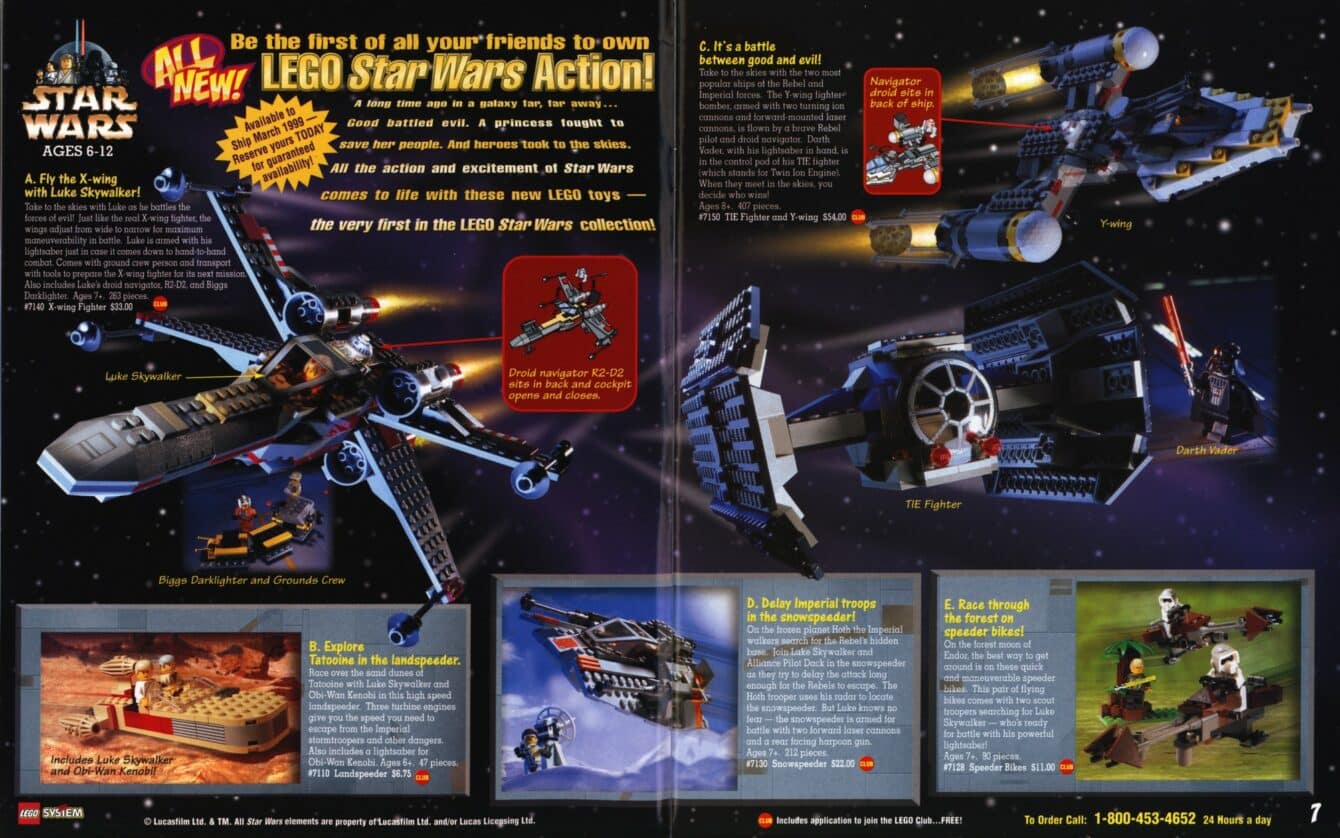 The first series of products were launched in March 1999 and included five sets based on the original trilogy. The sets represented some of the most emblematic vehicles from a far, far away galaxy: the X-wing Starfighter, TIE Fighter & Y-wing, Landspeeder, Snowspeeder and Speeder Bikes. 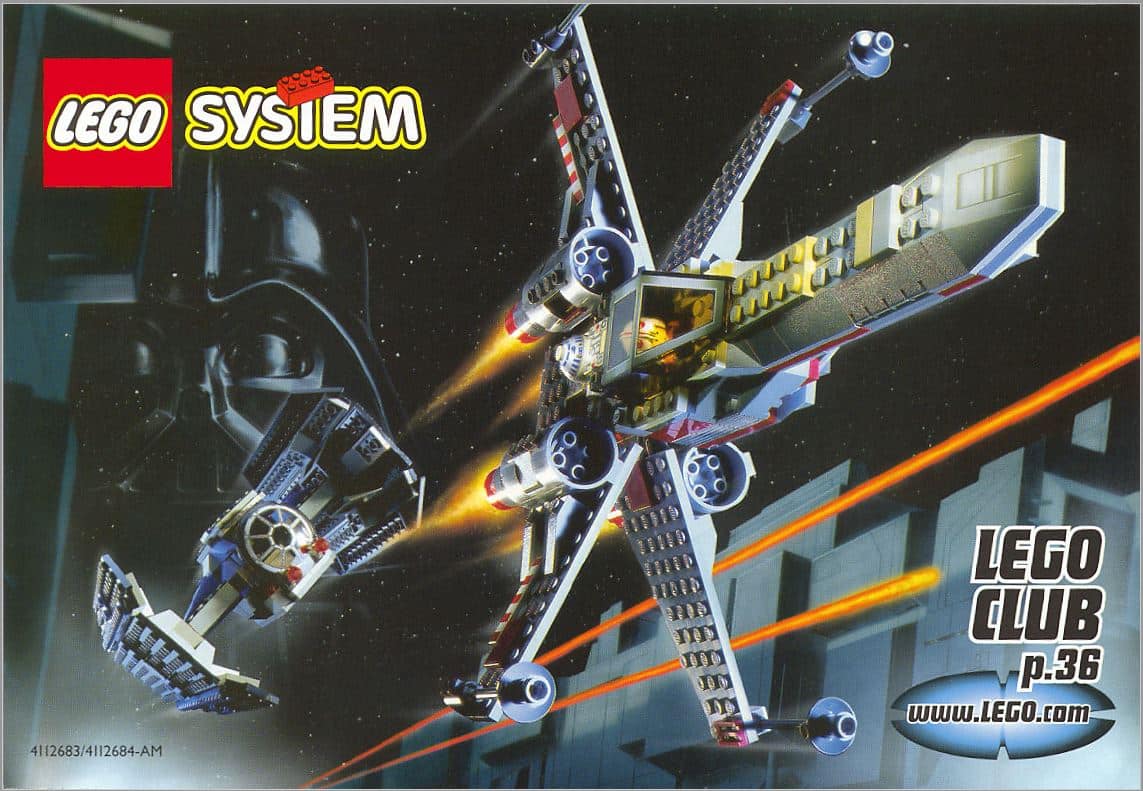 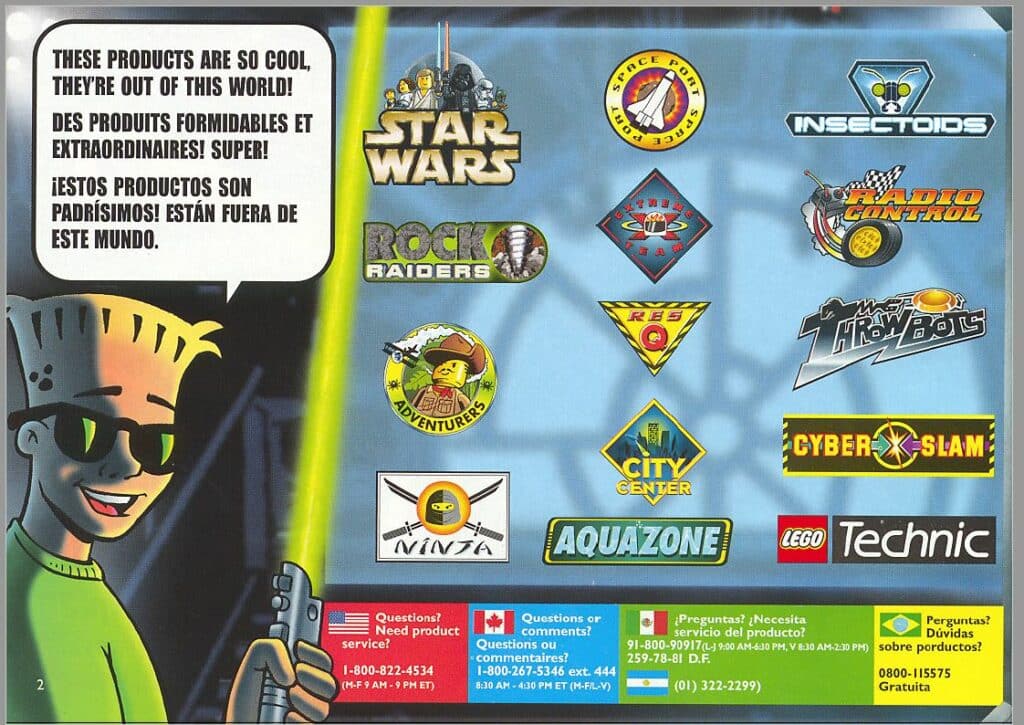 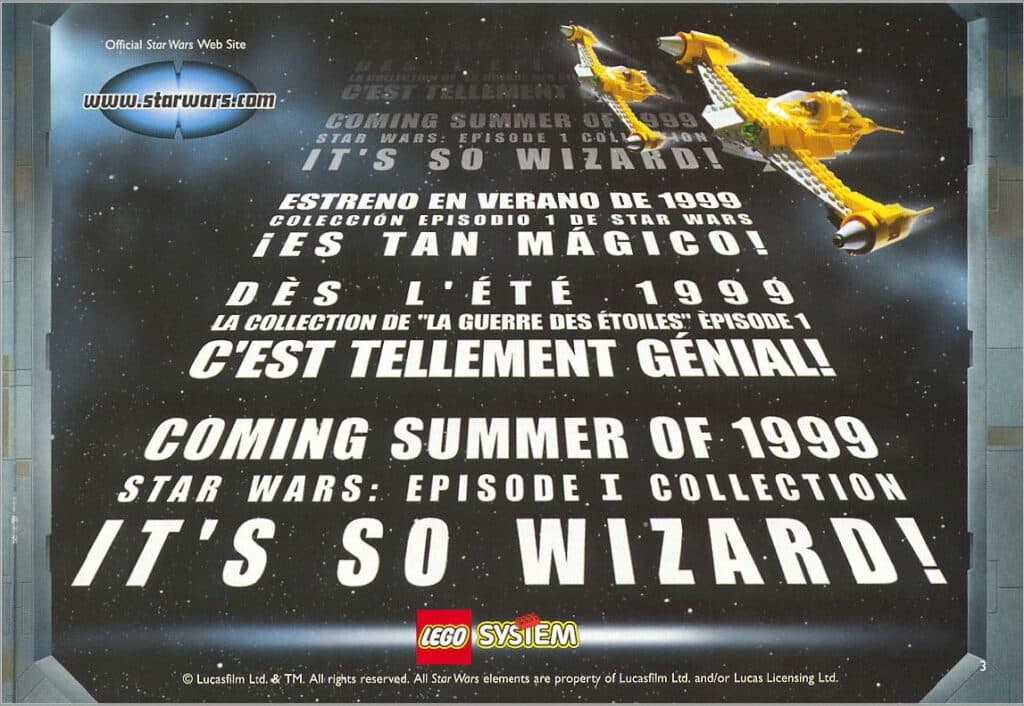 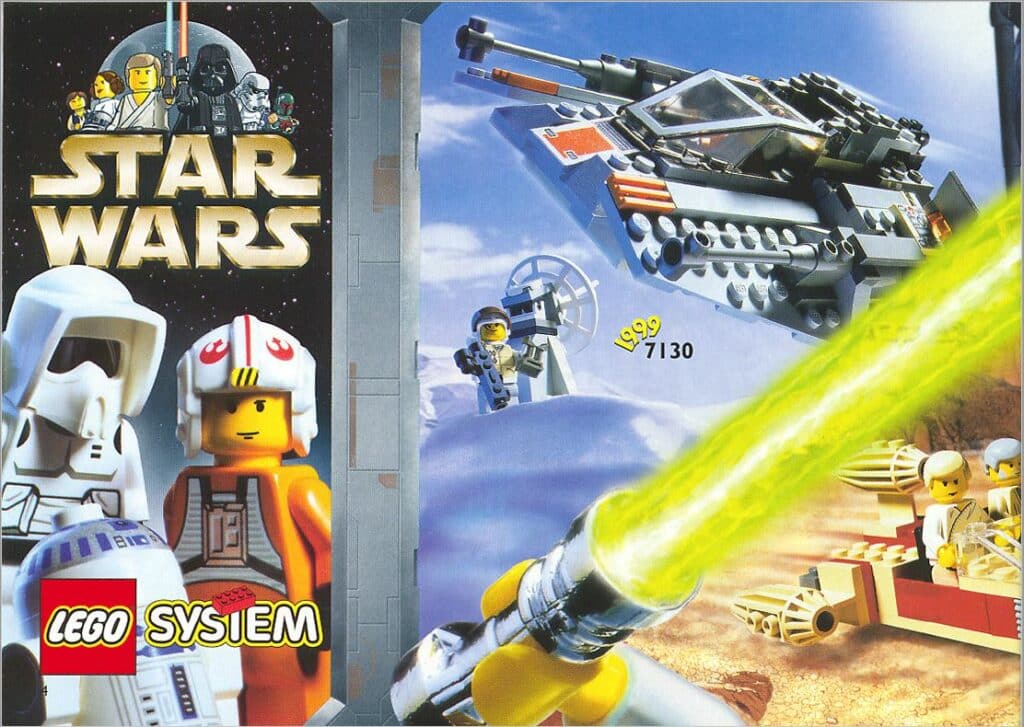 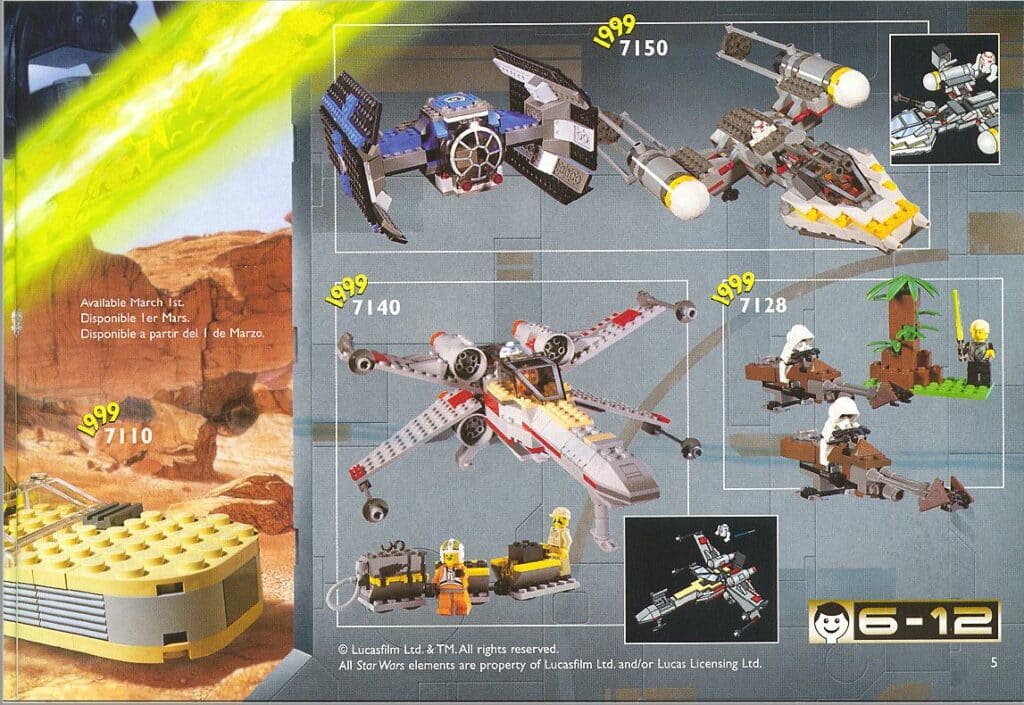 A second wave of sets based on Star Wars: Episode I – The Phantom Menace were released a little later to coincide with the release of the film in May, introducing eight more sets to the line. These included Gungan Sub, Mos Espa Podrace, Anakin’s Podracer, Naboo Fighter, Droid Fighter, Sith Infiltractor, Lightsaber Duel, and Naboo Swamp. The line has brought with it notable additions to Lego’s portfolio of pieces, including the first new mini-figure hairpiece in 20 years (for Qui-Gon Jinn) and the first specially designed mini-figure head (for Jar Jar Binks).

September 1999 we witnessed the release of the Mindstorms Droid Developer Kit, with R2-D2 as the main model. Instructions for additional models were included, such as similarities with another droid featured in Episode I, as well as a Gungan submarine. One of the droids included even paid tribute to Lego with the almost identical name, L-3G0.

Derek Stothard, Vice President of Licensing at Lucasfilm, said: “Our collaboration with the LEGO Group is still a huge success. It allows people to explore the Star Wars Galaxy in a unique way. Whether the Millennium Falcon is carefully built for a display case or the duels are replayed with Lego Star Wars models, the Lrgo Star Wars series will fascinate fans of all ages who love the Star Wars Galaxy just as much as we do.”

What began as a huge risk paid off generously, setting the precedent for an onslaught of future IP licensing agreements. At the age of twenty, Lego Star Wars can be considered a classic theme in its own right. A toast to another twenty! 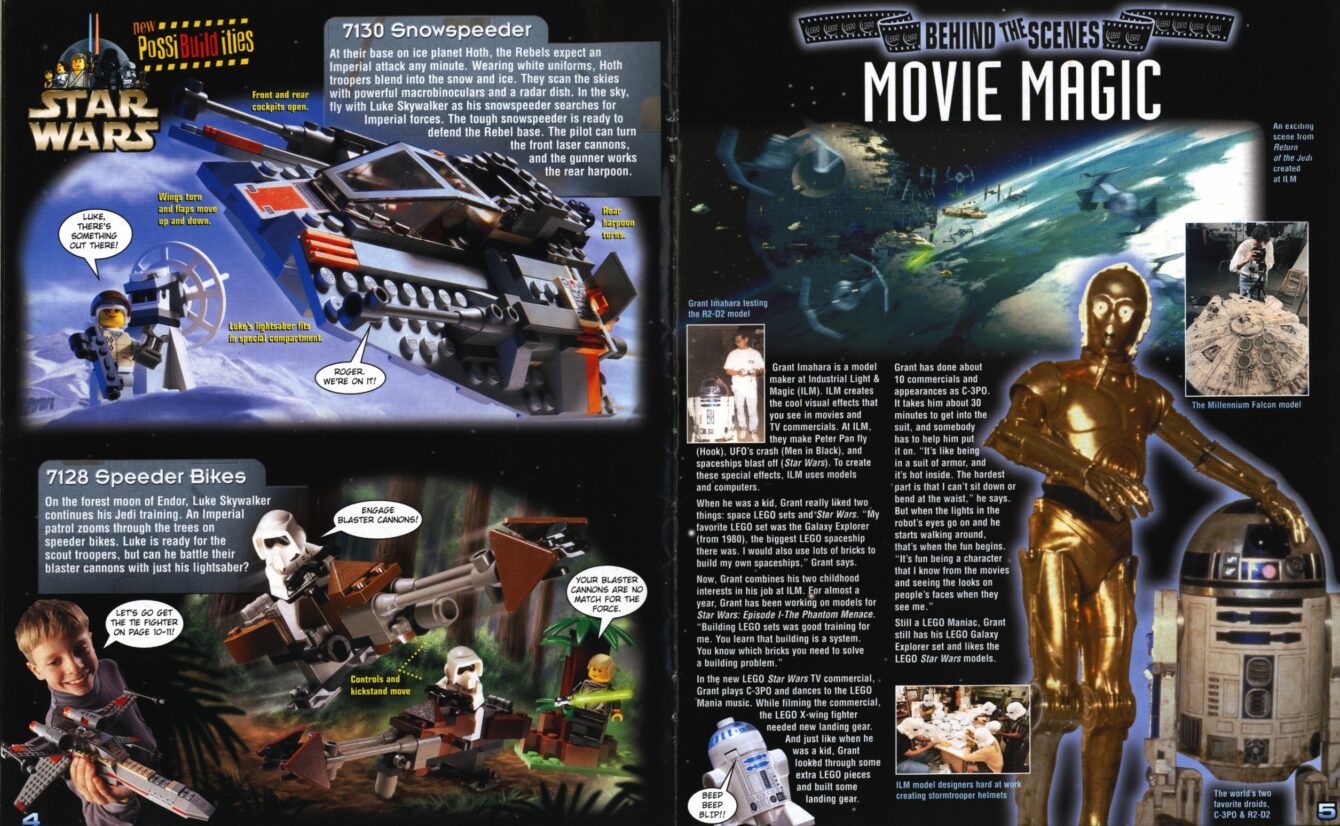