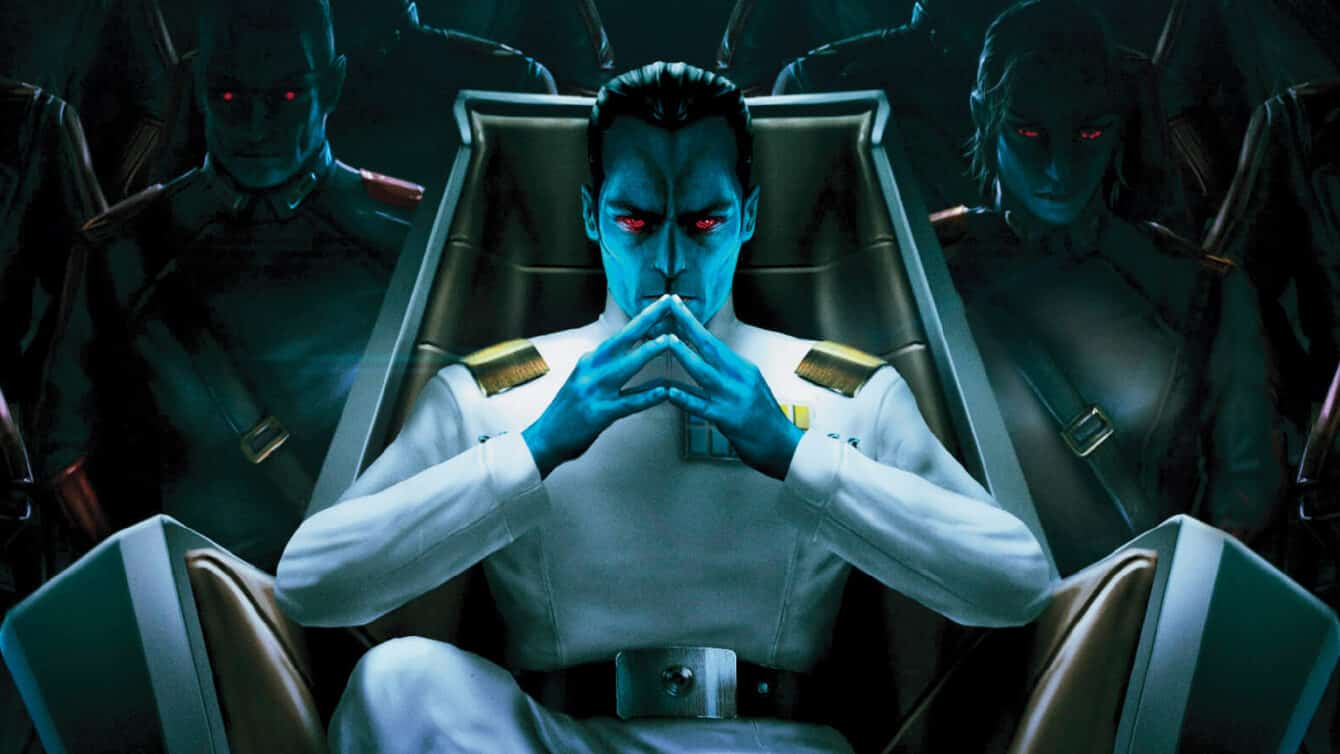 Meet Grand Admiral Thrawn! The best-seller novel “Her to the Empire” written by Timothy Zahn is the first volume from the Thrawn Trilogy (Legends), considered by many to be a worthy sequence to the Star Wars original trilogy

Mitth’raw’nuruodo, or Grand Admiral Thrawn, is one of the expanded universe most iconic characters and a brilliant soldier at Galactic Empire service. Thrawn is a blue alien, of the Chiss species, and a tactical and strategic genius of the Empire. Thrawn who believes that in order to conquer the enemy it’s important to understand his culture, was given the task of defeating the rebellion against the Galactic Empire.

Created by Timothy Zahn, the character first appeared in Heir to the Empire in 1991, as part of the acclaimed  Thrawn Trilogy (Legends). It was an immediate success, and listed in the New York Times’ best-selling books. Heir to the Empire is considered one of the most important landmarks in the Star Wars expanded universe and since its release, it has been accepted by the franchise’s fans as the true sequence of the original trilogy. In addition, the work has been used as a creative source for several other products in the series, including elements of games, films and animations.

It’s not hard to understand why Thrawn is so fascinating character. He is the only non-human Empire Commander, who did not possess the Force, but incredibly did not need it. Owner of a unique intellect and an enviable meticulousness, Thrawn establishes precise strategies and knows how to master his domain without having to use questionable resources.

More importantly, Thrawn was not a passionate character. Extremely cold and rational, he had much more solid methods than his own masters, Palpatine and Darth Vader. This allowed him to collect the pieces of the fragmented Empire after the fall of both and undertake a campaign against the New Republic that gave much work to Luke Skywalker and Co. limited (the events are described in the Thrawn Trilogy of 1991).

With the end of the old Expanded Universe, being downgraded to a non-canonical seal, all the Thrawn Trilogy stories of 1991 were discarded in favor of the new Disney undertaking.

However, due to the character’s huge success, Disney/Lucasfilm decided to include Grand Admiral Thrawn character in the third season of the Star Wars Rebels animated series and to the fans’ delight, in April 2017, a Thawn’s new book was released: Star Wars:Thawn. The book was written by the same author and it’s the first volume of a new trilogy, with new stories, which is now part of the official franchise canon. 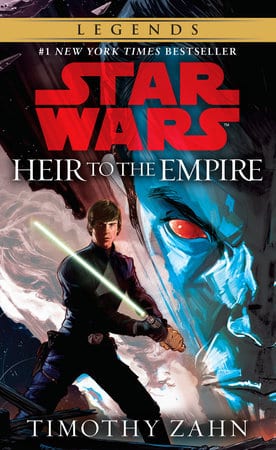 The Thrawn Trilogy is a collection of three novels: Heir to the Empire, Dark Force Rising and The Last Command, and take place in 9 DBY, about five years after Star Wars Episode VI: The Return of Jedi.

At the end of The Return of the Jedi, everyone is celebrating and a mood of “happily ever after” hangs in the air. This makes sense in a closed story in which good has conquered evil.

But when we stop to analyze the entire political story in the Star Wars universe, things wouldn’t end so well. After all, Emperor Palpatine may have died, but there is still a whole Empire made of men who really believe in that cause and who wouldn’t let it all end overnight.

And it’s from this premise that the writer Timothy Zahn created, in 1991, one of the best Star Wars stories ever made, being considered the official sequence of the saga before Disney bought Lucasfilm.

Despite Palpatine and Darth Vader’s defeat and death in the battle of Endor, the Empire still maintains zones of resistance throughout the galaxy and the civil war seems far from over. In command of imperial troops is Grand Admiral Thrawn, considered the Empire’s greatest strategist and the only non-human to achieve such a high rank in the hierarchy.

Meanwhile, Luke, Han and Leia live in Coruscant, in the former imperial palace that is being transformed into the New Republic headquarters.

From there, Timothy Zahn develops history in a very similar way to films, capturing the whole essence of the saga with only words. To get an idea, the plot opens in space, aboard an imperial destroyer, just like in the films of the saga. Of course, when we talk about Star Wars, fans really want to know what happened to the original trio of heroes. And they are very well developed in this first book of the so-called Thrawn Trilogy.

Luke Skywalker has never dreamed of being a Jedi, and has many doubts as to whether to continue his sister Leia’s training. At some point he remembers that even a master like Obi-Wan Kenobi failed to train Anakin Skywalker.

By the way, for the reader who forgot about important moments of the cinematic saga, it is interesting how Timothy Zahn manages to fit these memories in a very natural way in the story, never sounding forced.

Despite all his doubts, Luke is portrayed as the great Jedi he was destined to be, even containing himself in certain situations so as not to mortally wound his enemies.Thanks to his Jedi discipline, he is able to remain calm in times of extreme tension. In some moments Luke even seems too relaxed for the despair of his companions. Besides, the character is much more proactive than in the movies, when he was only carried away by the flow of events.

Leia Organa-Solo (if anyone still had doubts, she married Han) left the fighting aside and went back being just a diplomat in search of agreement between the planets that are not yet fully loyal to the New Republic. In her spare time, she continues her Jedi training with Luke and becomes stronger in the ways of the Force. In addition, the Skywalker twins’ telepathic link is becoming increasingly powerful. The negative point of the character is that she spends too much time being treated as someone in need of protection, unlike the fighter who helped the Rebellion defeat the Empire.

Han Solo, unfortunately, ends up being one of the least interesting characters in the book, traveling from one place to another in search of his old contacts to help establish the New Republic. Not to mention that he attends some political meetings and seems a little out of place in the middle of it all.

But the story could not survive only from old characters and Timothy Zahn adds some new and interesting faces to Star Wars, such as Captain Pellaeon, smuggler Tallon Karde and Mara Jade, character that has become very important in the expanded universe and very popular amongst the fans. 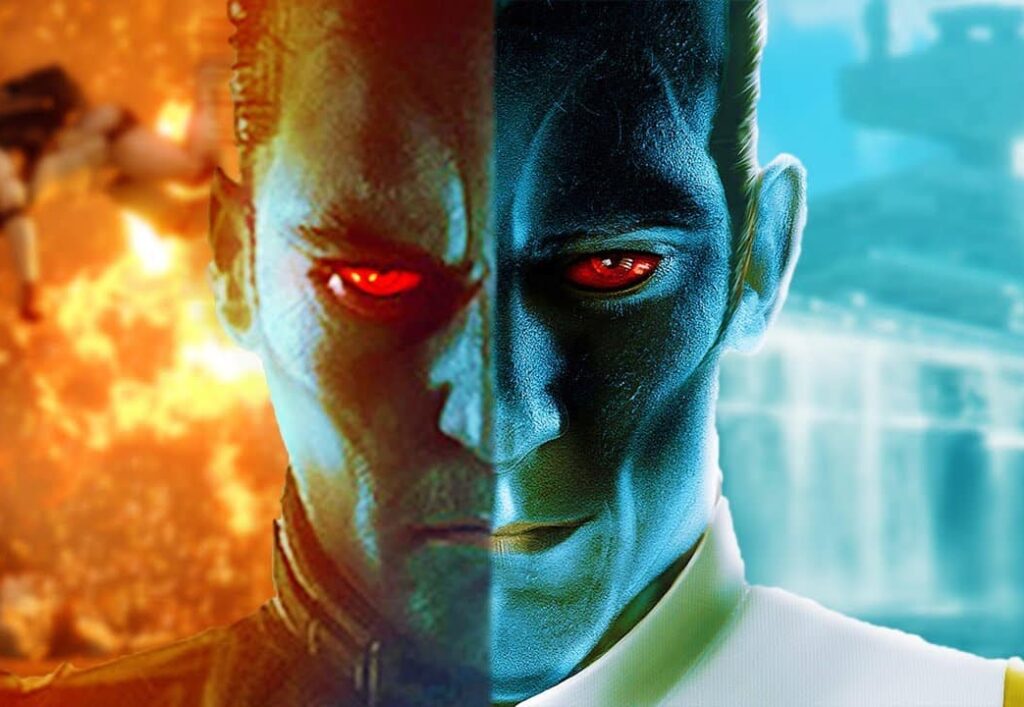 Of course the most important character is Admiral Thrawn. While the Sith Palpatine and Darth Vader have always been guided by emotion (more specifically hate and fear), Thrawn is portrayed as someone extremely cold and therefore able to develop the most creative strategies of combat.The character’s weak point is that at a certain time in the story his strategic ability turns almost into a superpower, with Thrawn succeeding in guessing where the heroes are going. In the beginning his deductions even make some sense, but by the middle of the book some of them begin to appear rather forced.

One of the most interesting points in Heir of the Empire is to show a small rebellion, which can defeat the Empire, but has difficulties in forming a new government. In addition to having to face what is left of the old regime, the New Republic must deal with internal conspiracies. It is quite interesting to see the conflict between “professional politicians,” who did nothing during the war, and the generals who effectively won the fighting and allowed a new government to emerge.

Even the New Republic spaceships were not prepared for peacetime, after all, they are warships. But in the absence of anything else they are used to transport cargo and the pilots are ex-combatants who end up seeing the new task as a kind of punishment.

In spite of all the political plot, Heir to the Empire is still full of action scenes. It’s amazing how, using only words, Timothy Zahn manages to create space fights that are as exciting as those seen on the cinema screens. We have Millennium Falcon shooting at Tie-Fighters, X-Wing facing Star Destroyers, escapes into hyperspace and everything else that is expected from a good story in the Star Wars universe. Zahn can still be much more effective at showing the power of the Force than George Lucas. And Lucas had dozens of Jedi and many special effects on the giant film screen. The feeling is that Luke Skywalker would defeat, with one hand on his back, any of the Jedi presented in Episodes I to III. No wonder most of them died easily in the 66th Order.

Although no longer part of the official Star Wars canon, Heir to the Empire is one of the most faithful stories to the spirit of the original trilogy, without having to rely on easy solutions, such as bringing back former villains. Timothy Zahn creates his own villains and they are as interesting and hateful as Vader and Palpatine.

Not to mention the fantastic way in which the author describes each planet presented in the story, making it possible to actually travel to each of them (the passage through Kashyyyk is sensational).

This is definitely a book that deserves to be read and highlighted on our book shelves.