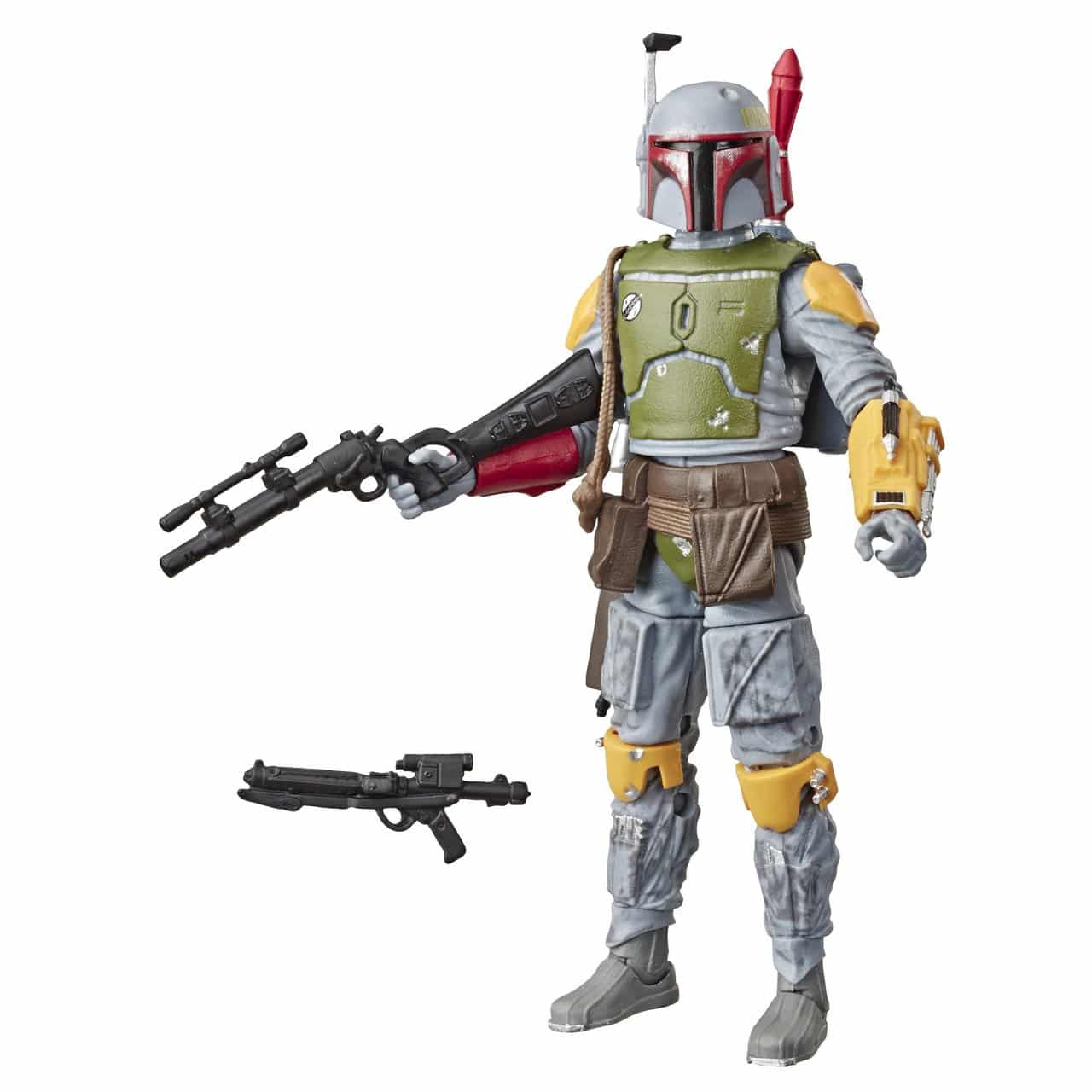 Boba Fett is the clone of his “father”, bounty hunter, Jango Fettt. Boba is one of the galaxy’s most feared bounty hunters with his tailored Mandalorian armor, lethal weapons, and silent demeanor. He learned from a young age fighting and martial abilities.

The character is known for expressing very few words in his movie appearances and never removing his helmet, almost entirely communicating authority through body language. Boba Fett is extensively featured in many works of the non-canonical Legends continuity and became a “cult figure” and one of the most popular Star Wars characters.

The 6-inch Black Series version of the bounty hunter it is something some collectors have been lusting for years.

This special edition decked out in the colours of the original 1979 Kenner figure, released before The Empire Strikes Back hit theatres. Back then, no one thought about how inaccurate the toy colours were, because toy accuracy to the film wasn’t a concern like it is today. So, in 1980, the whole line was refreshed, and the colouring and package art of Boba Fett was updated to match the rest of the line of the movie.

Now, to celebrate the 40th anniversary of the film, Hasbro brings back design and art inspired by Kenner with Black Series detailing for a premium figure embracing the Star Wars saga’s legacy.

Announced at Star Wars Celebration Chicago,  it was a SDCC 2019 exclusive, so it will be hard to find. According to sdccblog.com, via Hasbro, it “may be available at other select conventions in North America, South America, Australia, and Europe”, as well as select retailers in Asia.

The Star Wars Sith Troopers were revealed on July, 10, 2019 through an article on Starwars.com and an Episode of the Star Wars Show. They were developed for the upcoming Star Wars film The Rise of Slywalker.

Named Sith Troopers, they are apparently the “next evolution of the Imperial First Order soldiers”. Whether they have any extra abilities is unknown – which may be the case as they are explicitly described as “Sith,” but they are definitely much more frightening,

Instead of their traditional white and black uniforms, they’re all red and black. A slightly more textured pattern is decorating the armor, although the general design is reminiscent of earlier clone troops from movies such as “Attack of the Clones” and “Revenge of the Sith.”

The figure features improved elbows and additional articulation of the shoulder to allow for more realistic poses. The package includes of two blasters, a bladed axis, a heavy weapon, and a gripping claw weapon.

The Sith Trooper’s single packaged version includes two weapons, instead of five which were included with the San Diego Comic-Con 2019 early edition release, and you can find it in the stores mentioned below.

We all love troopers and a bright red Sith Stormtrooper is a great addition to everyone’s collection. 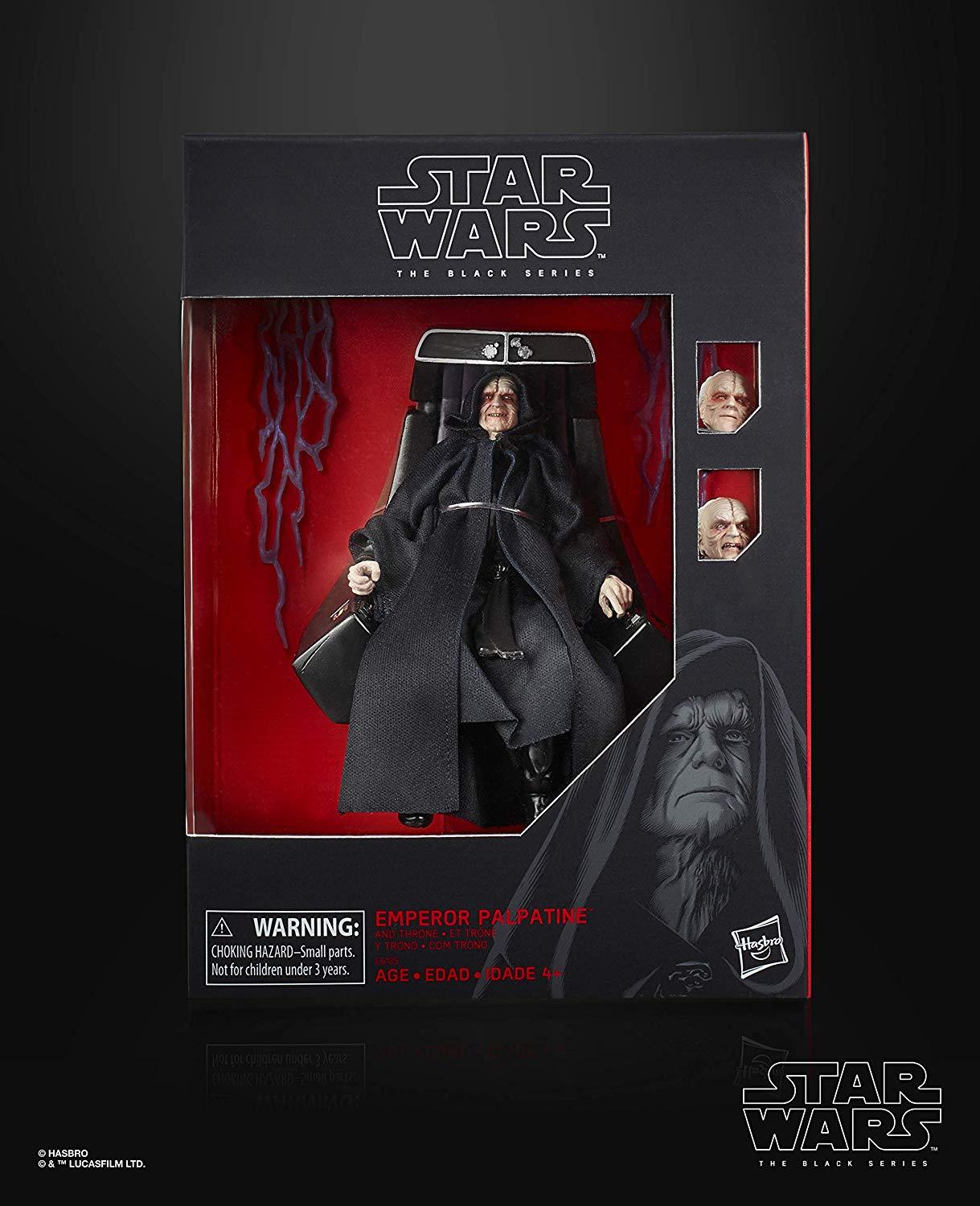 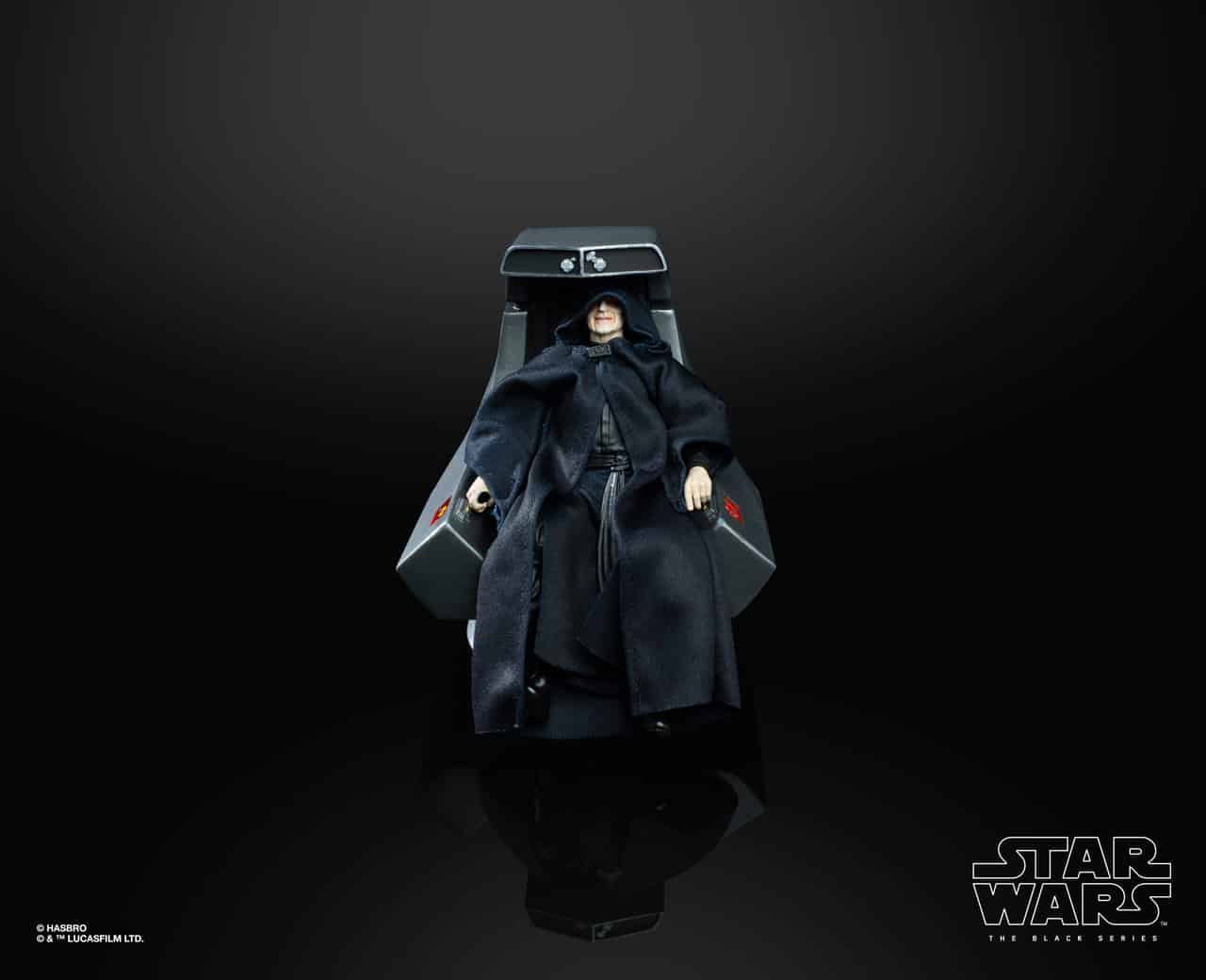 Darth Sidious, born in Sheev Palpatine, also known Emperor Palpatine is, along with Darth Vader, the main villain of the Star Wars saga. And he’s back to The Black Series, based on his appearance in the “Return of the Jedi”.

There was already an Emperor Palpatine released as part of The Black Series. However, it’s retired and hard to find, so I’m glad to see it coming this year in a new updated version.

This 6” release includes his iconic “sit and spin” Death Star II throne, Force Lightening accessories, what looks to be a new robe and three head sculpts including his famous evil-looking. This is the first time they’ve ever given a character three different heads. Very cool!!

Unlike the earlier version of the figure, the bottom half now has sot goods, allowing him to do something rather iconic: sit down.
A figure with so many accessories has never been released before. So, it’s kind of breakthrough for The Black Series.

The Emperor is an Amazon exclusive, and it’s now available for sale.

One of Hasbro’s biggest launches in 2019 and shown at the Star Wars Celebration in Chicago was the life-size replica of the Luke Skywalker pilot’s helmet, which is part of the Black Series line. In addition to being a life-size replica – which fits perfectly on an adult’s head.

The company Anovos had already launched a replica similar to this one from Hasbro, with very similar features. However, the Black Series model will cost $99, while the Anovos model will cost three times as much, costing $399.

According to Schneider, director product design and development at Hasbro, The Luke Skywalker Black Series Helmet is the most requested roleplaying helmet in the market.

Decorated to look as worn out as the real thing, this helmet includes thick padding for comfort, an adjustable elastic chip strap, a retractable visor, as well as synchronized LED lights and three speakers for surround sound, along with lights to recreate flare from TIE blasts, chatter from R2-D2 and switch modes between Battle of Yavin and Battle of Hoth.

It has tons of features and is absurdly accurate. Visually, it’s the most labour-intensive helmet that Hasbro has ever done. 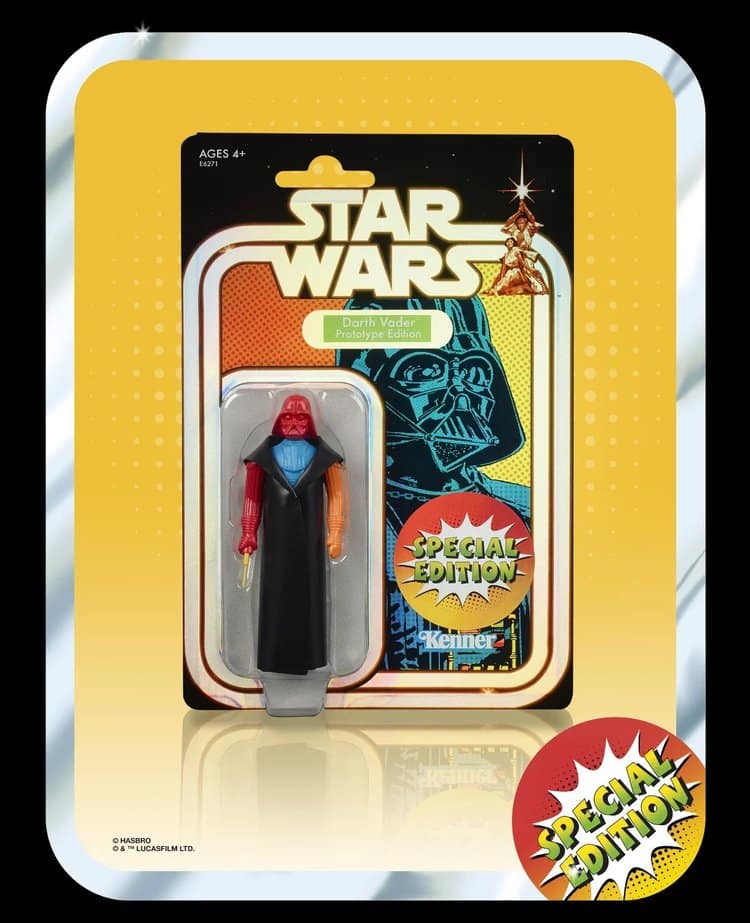 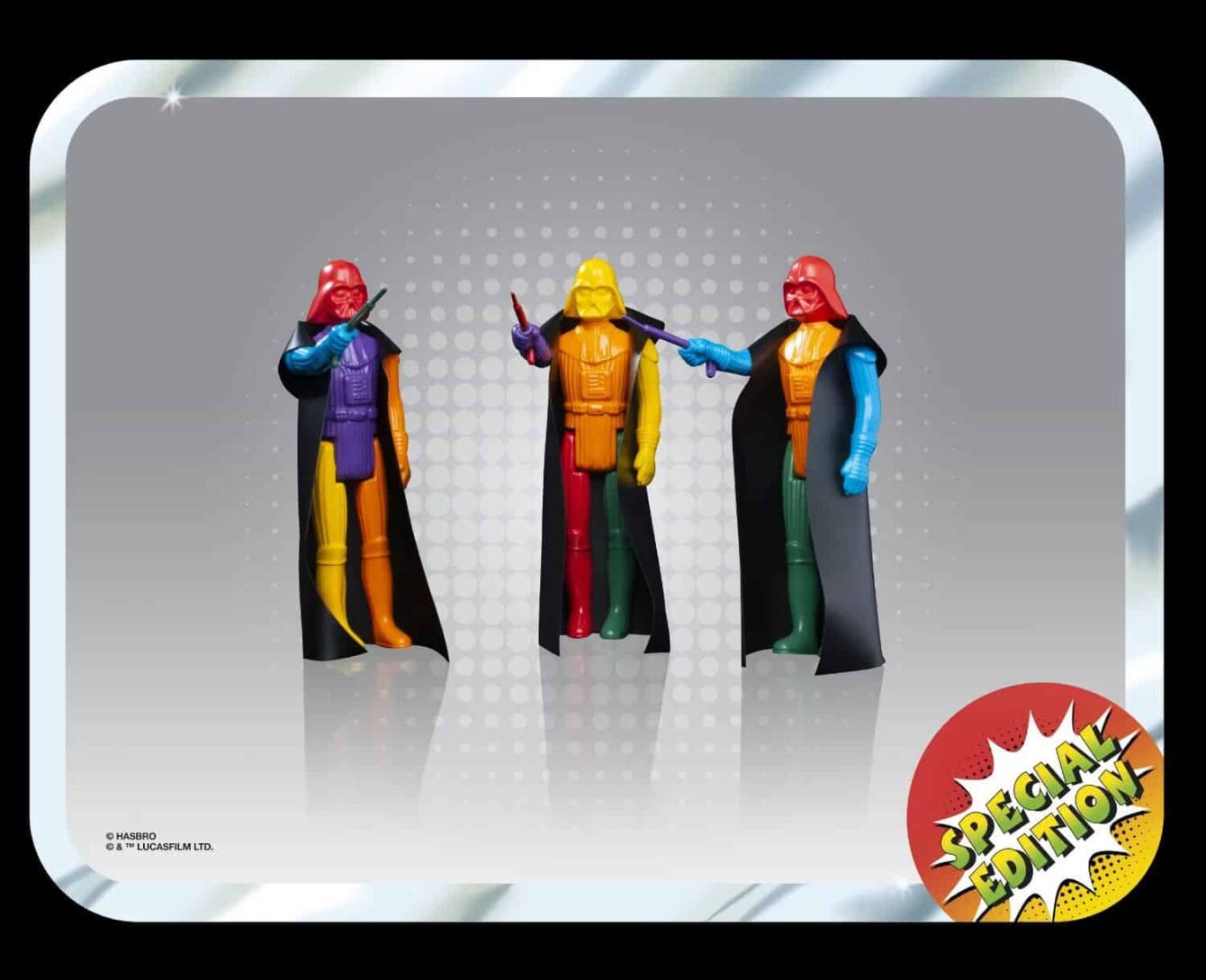 During the original vintage Star Wars series, Kenner released the very first Darth Vader action figure in 1978. Since then, Kenner/Hasbro has released every version possible of the Sith Lord. Darth Vader remains popular and there is not one year where Hasbro doesn’t offer at least one version of the iconic Sith Lord in action figure form.

Inspired by the original prototype action figure from Kenner back in the day, this 3.75″ special edition prototype Darth Vader doesn’t just replicate the old-school design of one of the most iconic action figures in toy history but makes him fabulous with all its color variations.

There is a ton of different color combinations, inspired by the random assortment of colors that sculptors create when these figures are in the planning stages. The packaging has been designed to match the spirit of the figure. It’s brighter and more Andy Warhol style pop art than we are used to.

If we consider that there are 6 different colors and 7 body parts and accessories that can be colored we can imagine that this action figure has a considerable number of variations out there. I guess it could be a small headache for those who want to collect them all!!

With his lightsaber in hand and his cape on his back, this special Darth Vader figure is great for play and display. 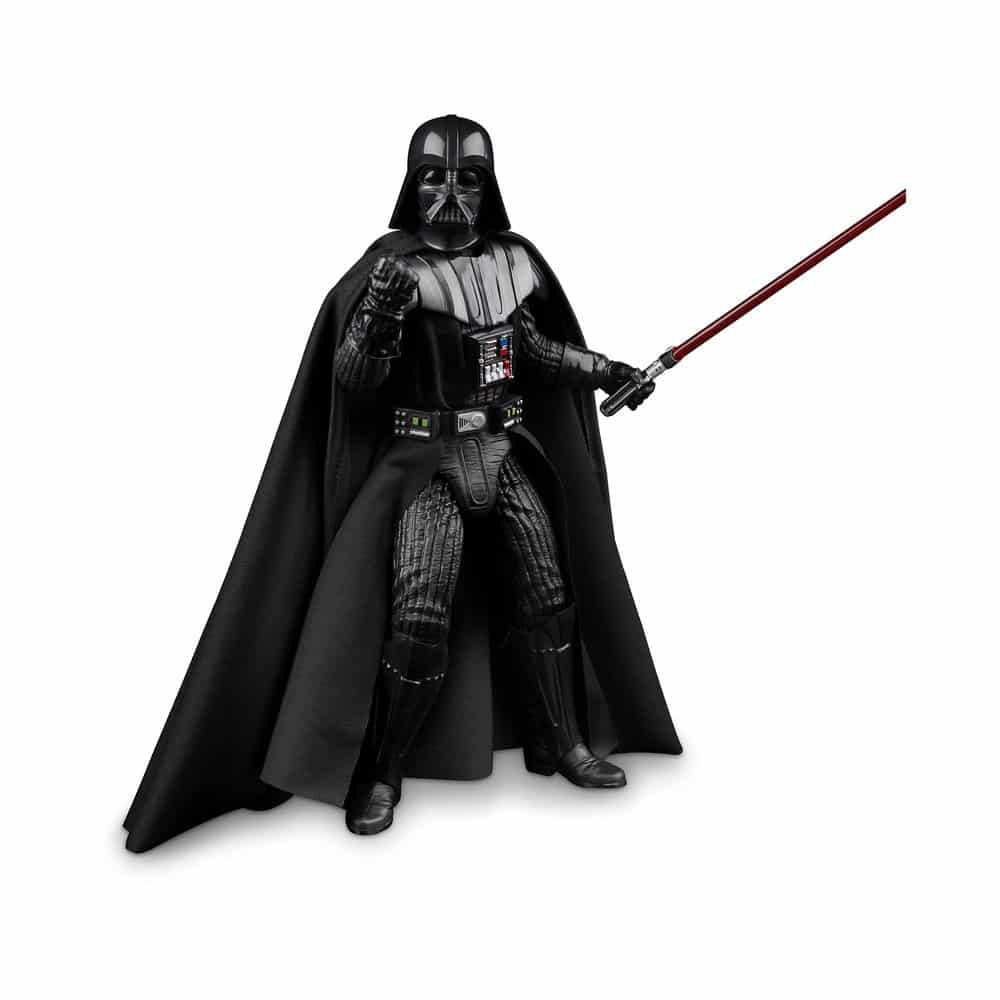 Darth Vader is one of the most instantly recognizable villains in movie history.

The character is a perfect choice for Hasbro to lunch its brand new “HyperReal” line under Star Wars: The Black Series. These are highly articulated figures in an 8″ scale that offer endless posing possibilities.

It features a metal skeleton under a seamless silicone body to give us character without visible joints, along with high quality soft products and good paint details.

Based on his appearance in Star Wars: “The Empire Strikes Back“, includes Vader’s iconic red lightsaber (with removable blade), a plastic force-blast element, and seven alternate hands for recreating memorable gestures.

It genuinely looks like he stepped right out of the movie. I don’t think collectors could ask for much more.

The Hyperreal Luke Skywalker figure is inspired by “The Empire Strikes Back” and joins the HyperReal Darth Vader figure previously released.

As the name suggests, HyperReal figures are Hasbro’s attempt to develop action figures that are as close to flesh and blood as possible.

To enhance the effect, the figures include fabric clothing, an interior skeleton structure, realistic rubber exterior skin, a hyper-articulation for a more realistic posture, several hands and detailed accessories

This Bespin Luke figure an impressive companion to the Hyperreal Darth Vader figure. Adding both to your collection will let you recreate classic scenes with a hyper-real faithfulness to the Star Wars franchise! 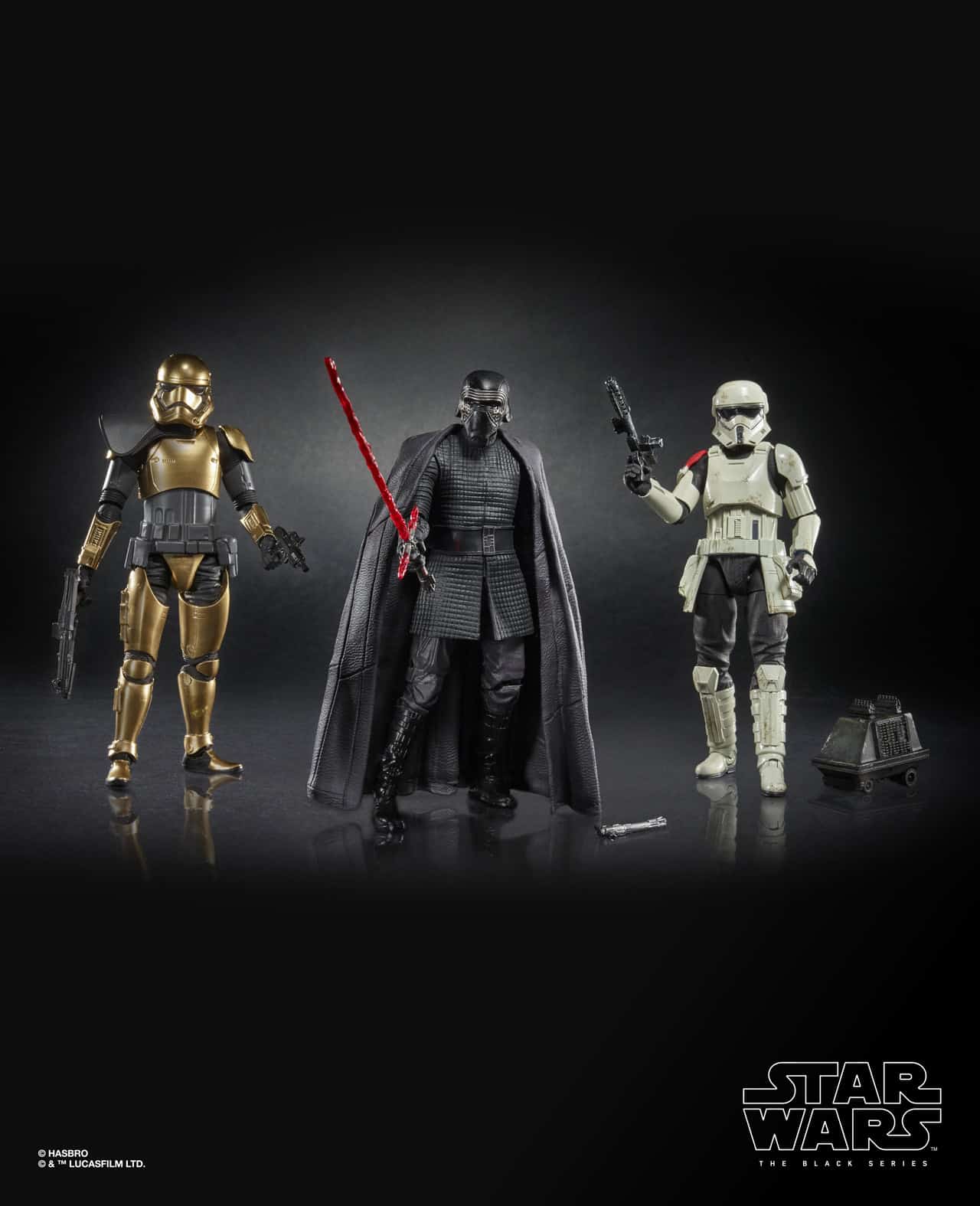 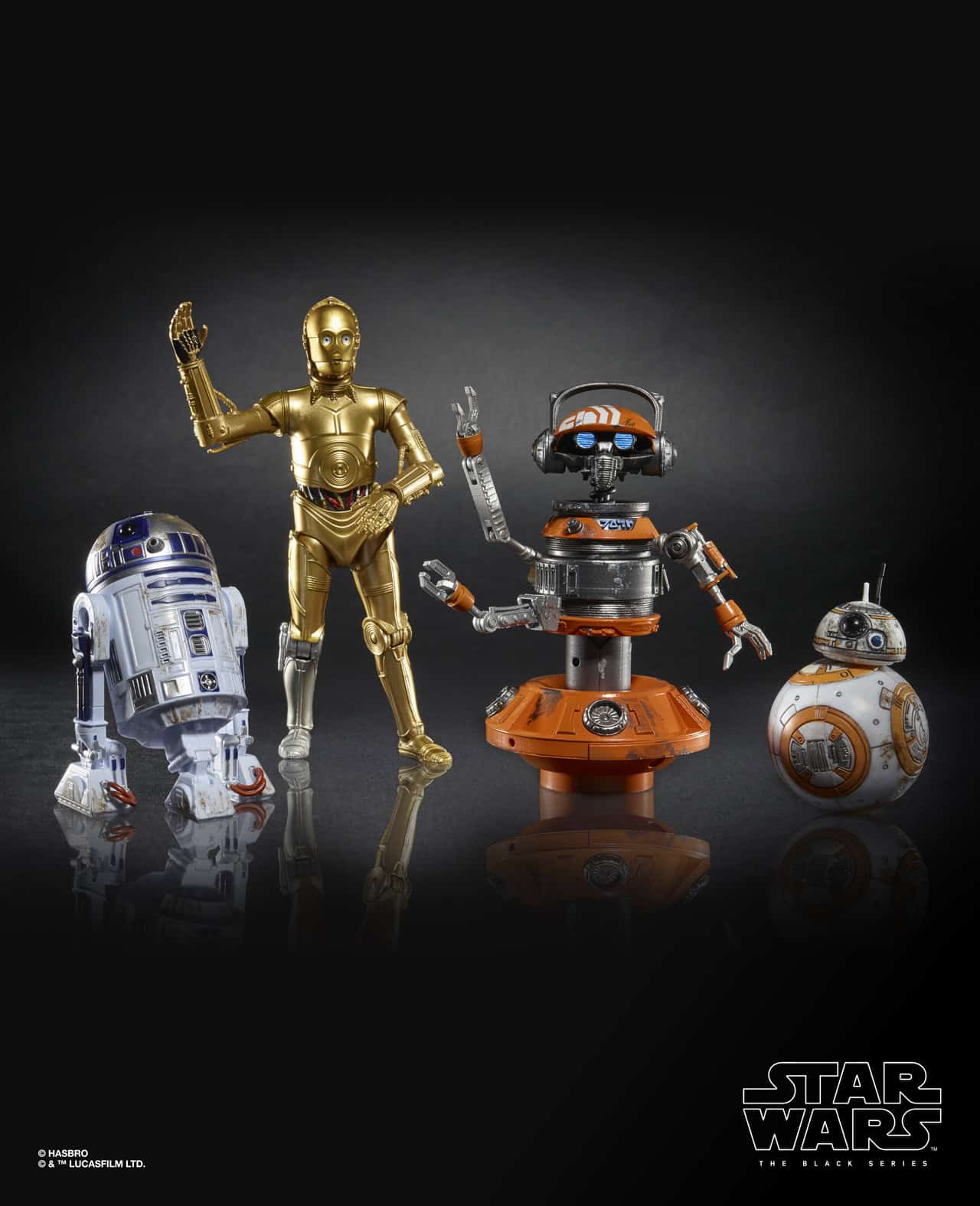 These three 6-inch scale multi-packs are exclusive items from the new Disney Parks’ Star Wars: Galaxy’s Edge, opened this summer. In keeping with the in-universe, immersive experience, the boxes don’t have Disney or Star Wars logos on the outside.

These 6-inch-scale figures are carefully detailed to look like the characters from Star Wars entertainment and feature premium detail and multiple points of articulation for pose ability.

First up, the Millennium Falcon ride Smuggler’s Run is getting a Black Series figure pack that includes Rey with Photo Real deco (for the first time), Chewie and, surprisingly, Hondo Ohnaka from The Clone Wars and Rebels. And yes, there are cheerful and sad Porgs in this pack (because everyone needs some prog options).

Lastly, there’s the Droid Depot pack which four of the usual suspects, including C-3PO with articulated elbows and updated thighs, R2-D2, BB-8 with more screen-accurate weathering, and DJ R3X or Rex, who old school fans will recognize from Star Tours, which is a nice touch.

These figures look incredible and will only accentuate the awesomeness of Star Wars: Galaxy’s Edge.

Inspired by the character’s appearance in “The Empire Strikes Back” and “Return of the Jedi”, this electronic helmet intended for role-playing is created with impressive detail.

It’s a full-size wearable replica, with adjustable fit for maximum comfort in any cosplaying scenario, interior padding, highly detailed deco and movie-inspired design, that comes with fancy features like a flip-down viewfinder with flashing LED lights and an illuminated rangefinder HUD.

Hasbro scanned a helmet used in the films (It looks as though this helmet has the paint scheme from The Empire Strikes Back), and that they worked to match the paint colors as exactly as they could.

The Star Wars Black Series Boba Fett helmet is available for pre-order, but it’s not expected to ship out until May 4, 2020, just in time for you to celebrate Star Wars Day next year. 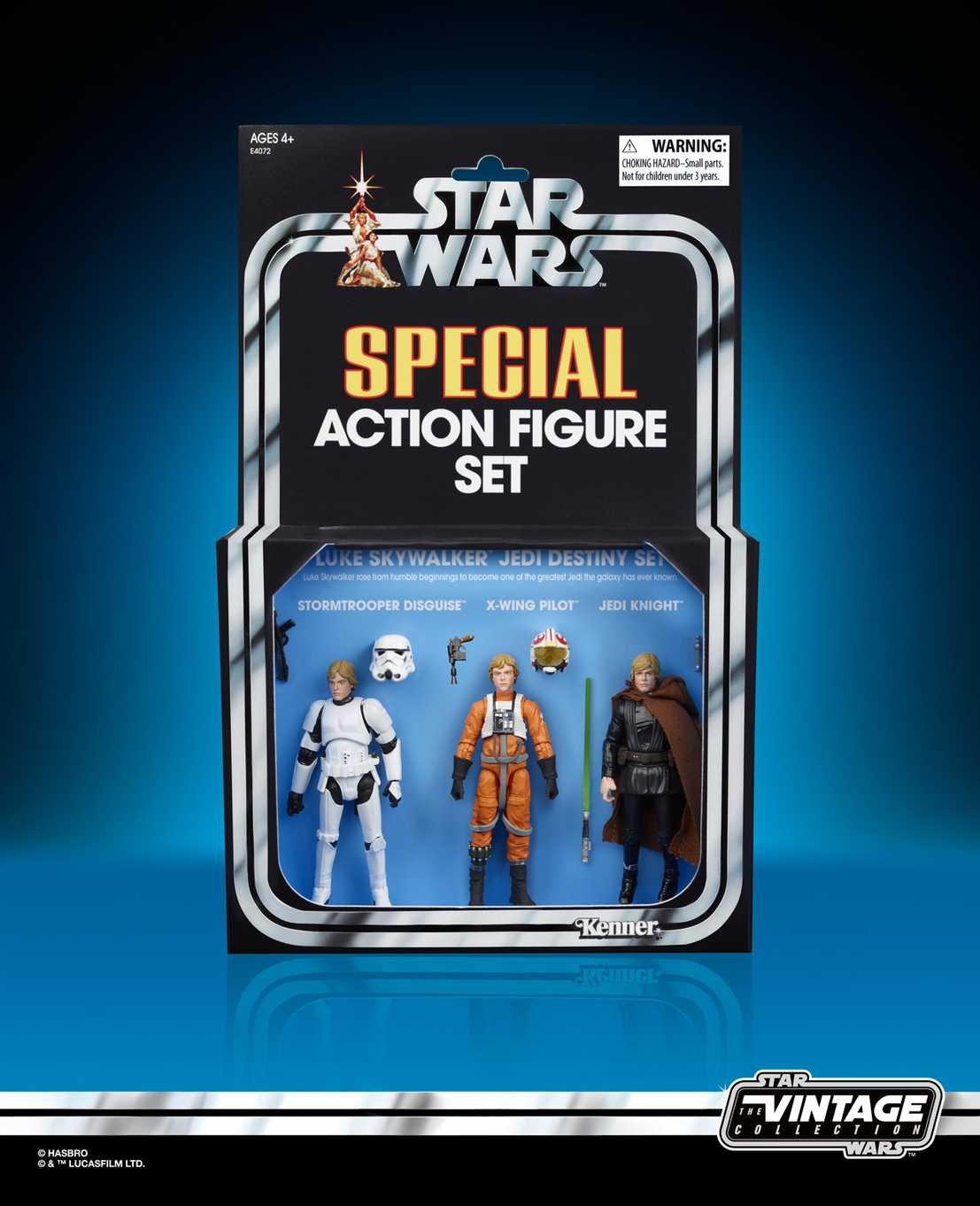 Lastly, Luke Skywalker with a three-pack figure. This figure pack comes with three 3.75-inch figures that represent the varying looks of Luke Skywalker from every film in the original trilogy – from “A New Hope”, “The Empire Strikes Back”, and “Return of the Jedi” that includes Stormtrooper Luke, Jedi Luke and X-Wing “Red 5” pilot Luke, each with a new head sculpt utilizing Photo Real printing, and other improvements.

These were all made with special detail and consideration. For example, the Stormtrooper Luke has a grappling hook. Cool, right?