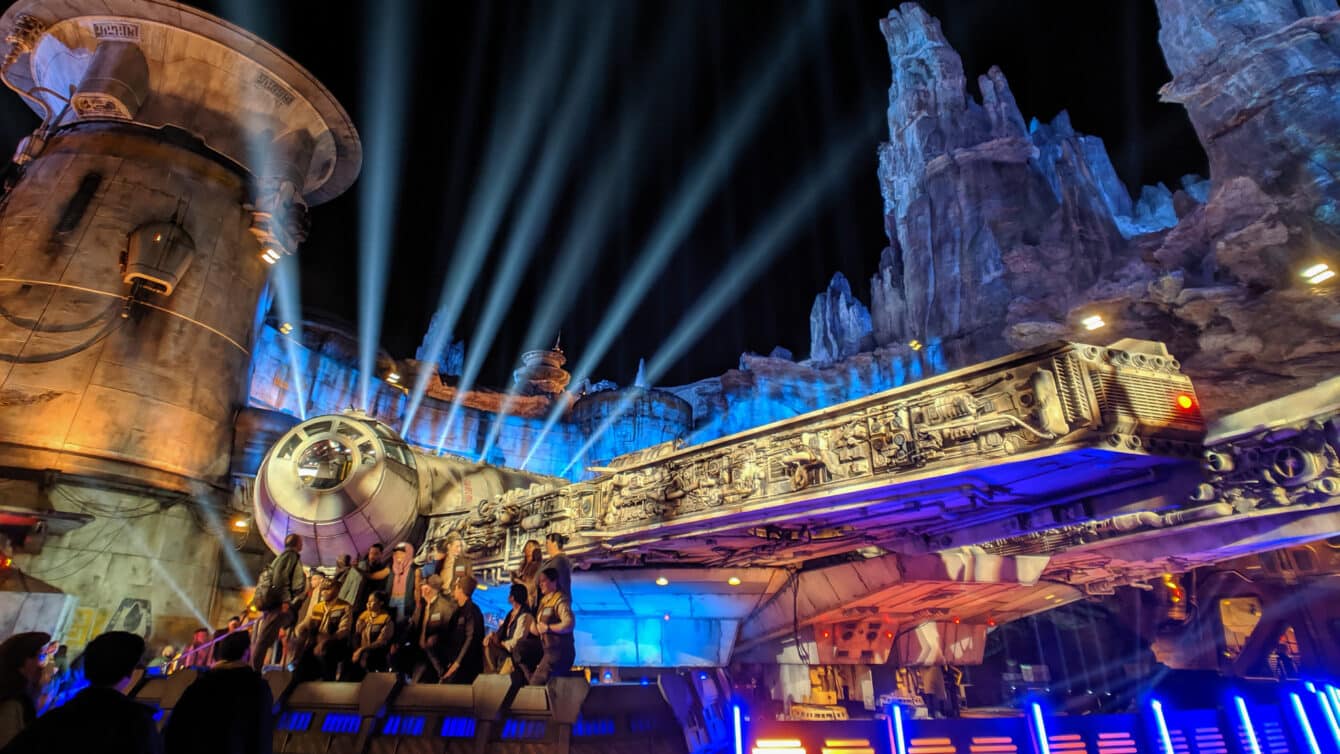 The Disney Star wars galaxy’s edge opening on May 31, was one of the greatest events of this year. The park expansion is the biggest in Disney history, opening first in Anaheim, then in Orlando, Florida on August 29.

In Star Wars Land you can fly through the celestial space aboard the Millennium Falcon, in a full-scale simulator that replicates the iconic ship once piloted by Han Solo and now by Rey and co-piloted by Chewbacca. In addition to the space simulator, the park also offers shops and restaurants in a saga setting, where you can embody Luke Skywalker and drink a glass of blue or green milk, try a Jedi Mind Trick (a cocktail with a vodka infusion) or taste the meat that was grilled in a capsule.

According to Bob Iger, Disney’s chief executive, the goal was to create a “deeply immersive” space. “It’s really possible to walk through this area and feel like you’re at the edge of the galaxy.”

The Millennium Falcon replica is the new main attraction, inspired by Black Spire Outpost, the largest colony on the planet Batuu, which appears in Star Wars books but never on screens. This was ” to make sure that [space] was never close to a single frame of reference”, revealed Asa Kalama, Creative Director of Disney Imagineering during a presentation. Because Disneyland Resort’s goal is to reach everyone, from the “hardcore” fans to people “who know nothing about Star Wars”, said Margaret Kerrison, from Disney Imagineering, as quoted by Reuters agency.

By the end of the year, another attraction, Rise of the Resistance, will open with Rey and other characters from the latest trilogy.

This attraction will place visitors at the centre of a battle between the First Order with its Stormtroopers and the Resistance. First the visitors, who will be seated between an eight-seater transport vehicle, will be taken into a Star Destroyer hangar.

This attraction will last approximately 28 minutes, but this includes the queue time which is the true innovation of the game, introducing the visitors to the story while waiting in-line, so that queue time becomes part of the fun.

Star Wars Galaxy Edge creates a fictional planet in the Star Wars universe, the Batuu Planet. Batuu is made up of a few villages and the largest amongst them is Black Spire Outpost, a modern village built on an ancient structure in ruins and petrified remains of ancient trees.

Black Spire Outpost is a dangerous place which serves as a meeting point for individuals who prefer to go unnoticed: scoundrels, smugglers and if rumours are true, even individuals associated with the resistance can be found wandering the Batuu planet. Can it be?

News of the Resistance’s arrival has caught the attention of the First Order who, of course, want to put an end to any sparkly opposition that might compromise their absolute control of the Batuu planet. And this is where your adventure begins, an adventure full of characters and lots of interaction (look who I’ve met along the way!).

To explore the secrets of Black Spire Outpost, the tip is to download the Play Disney Parks app, as soon as you step on Batuu. With it, you’ll be able to interact with droids, translate messages from several languages in the galaxy and even take a job offer. Finally a chance for Star Wars fans to amuse themselves in a truly immerse experience. 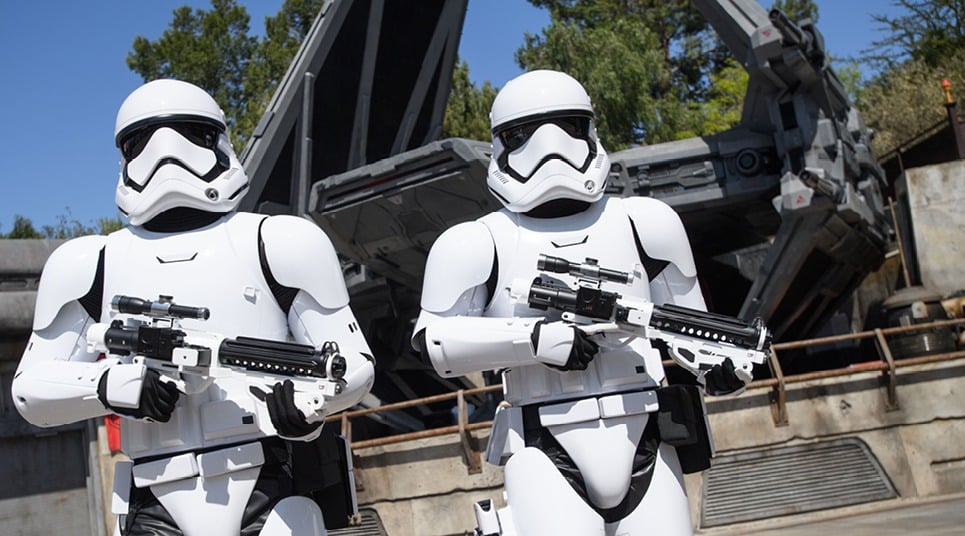 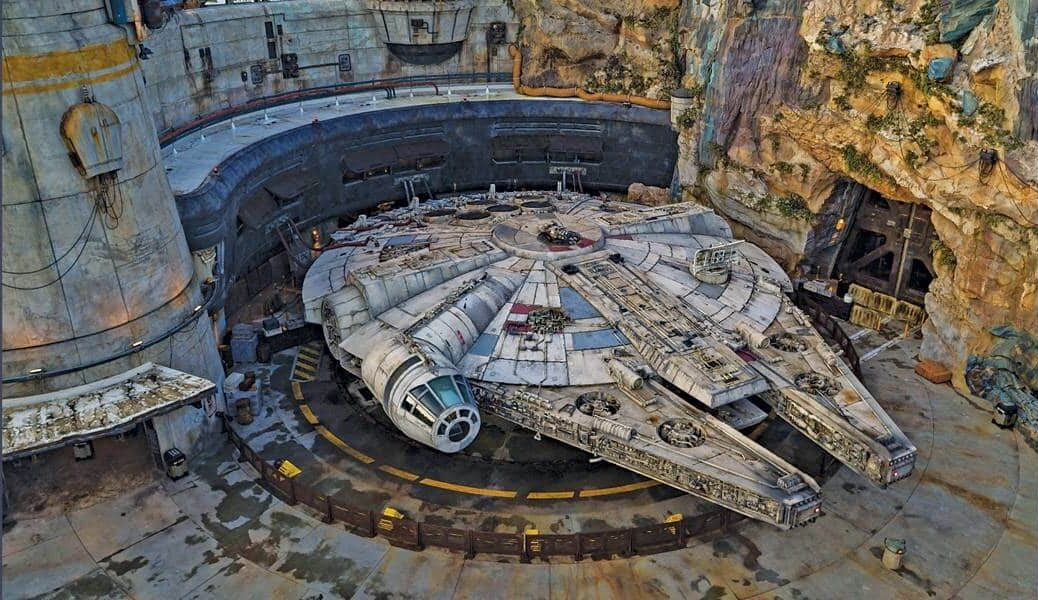 The adventure begins with a call from a local merchant, Hondo Ohnaka, to transport clandestine merchandise to a mysterious place aboard the fastest ship in the galaxy: the Millennium Falcon. To be hired you don’t need experience, just the will to learn.

Six people at a time come in and each of them must play a role: two pilots in the front, two gunners in the middle and two engineers in the back. As the flight begins, various tasks are passed on to the crew, such as pressing command buttons, firing and evading enemies. The overall performance interferes with the progress of the mission.

It is an unprecedented attraction as it allows participants to interact during the experiment, adding to the already impressive realism of the images and scenarios.

Don’t expect a toy with 4D spins, twirls, bumps, scares and perceptions – the key here is to feel like you’re flying in a Millennium Falcon look alike replica and because it’s a lightweight simulator, it’s also suitable for children.

But getting to the cockpit is only part of the experience. Outside the line runs through long corridors full of film “easter eggs”, passing through a mechanical workshop and around the very ship that crowns the space. 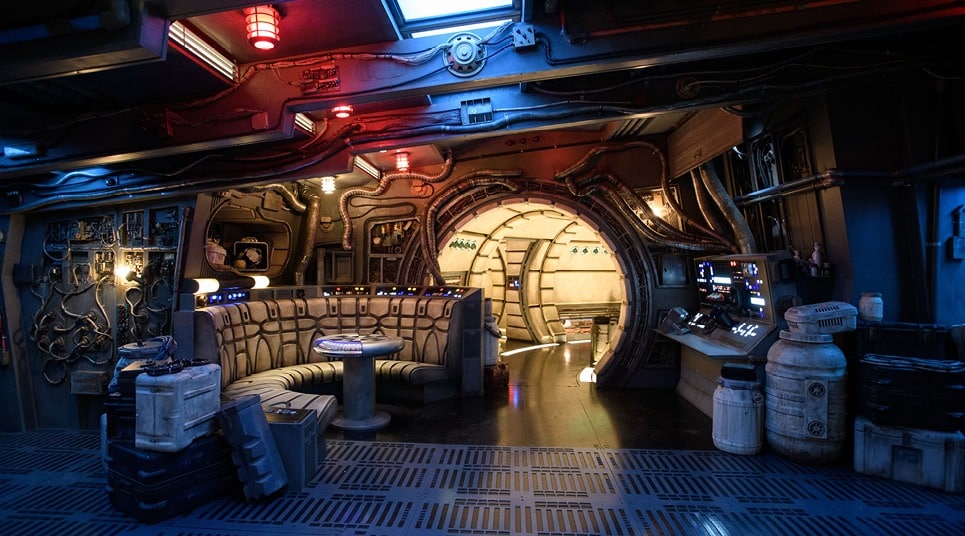 What to Eat And Drink

Batuu is anchored by two central attractions (the second one, Star Wars: Rise of the Resistance, will not open until the end of the year), as well as restaurants and themed shops that are also designed to keep visitors immersed in the universe of the plot. Do you know about the blue milk, Luke Skywalker’s favourite drink? It’s on sale at the Milk Stand, in a sweetened version (also available in green). 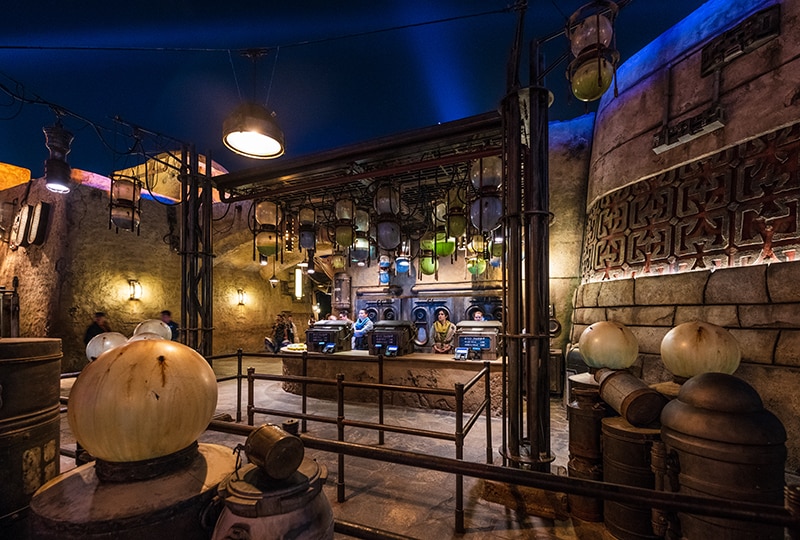 You can also find other famous drinks at Oga’s Canteen – inspired by the place where Luke Skywalker and Obi Wan Kenobi hired Han Solo and Chewbacca to rescue Princess Leia.

The Jedi Mind Trick cocktail, combined with vodka, liqueur and lemon and white grape juices, is one of the main sensations, along with Bad Motivator IPA beer and Toniray wine.

And if in the movie droids couldn’t get into the tavern, at Oga’s bar this is not an issue, the bar even has a DJ Droid playing animated songs while the bartenders prepare colourful drinks served with fluorescent ice. This is the only place in the park that offers alcoholic drinks.

Not only the fans of the show will drool in the shops. There is an alcove full of treasures collected by Dok-Ondar (the creature that can find the rarest and most valuable items), where’s it’s possible for you to mine products from different movie seasons, including holocrons, Kyber crystals, jewels, Jedi and Sith artifacts and light sabers. Not to mention, of course, T-shirts, buttons and caps. 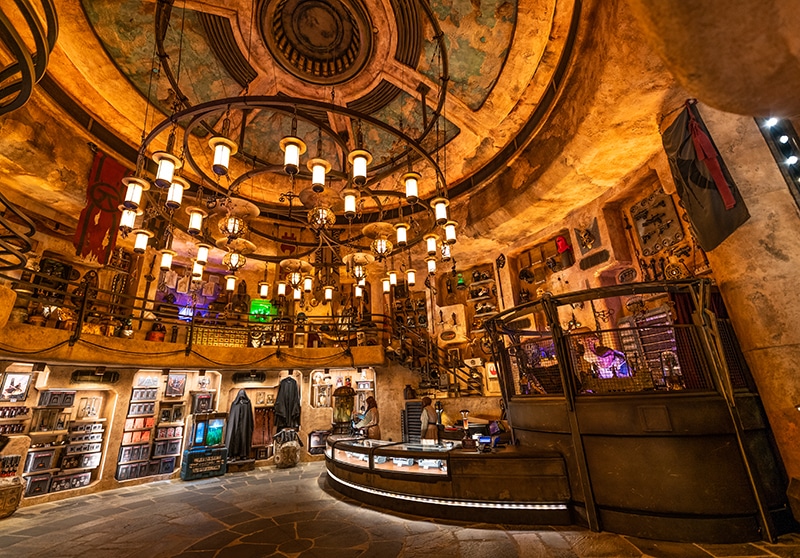 You can find the weirdest fluffy toys in the Creature Stall’s store, featuring Porgs, Loth cats, Kowakian monkeys and all sorts of strange animals that only those who have seen the movies will know what it is all about. Better-known souvenirs are found on the Toydarian Toymaker. 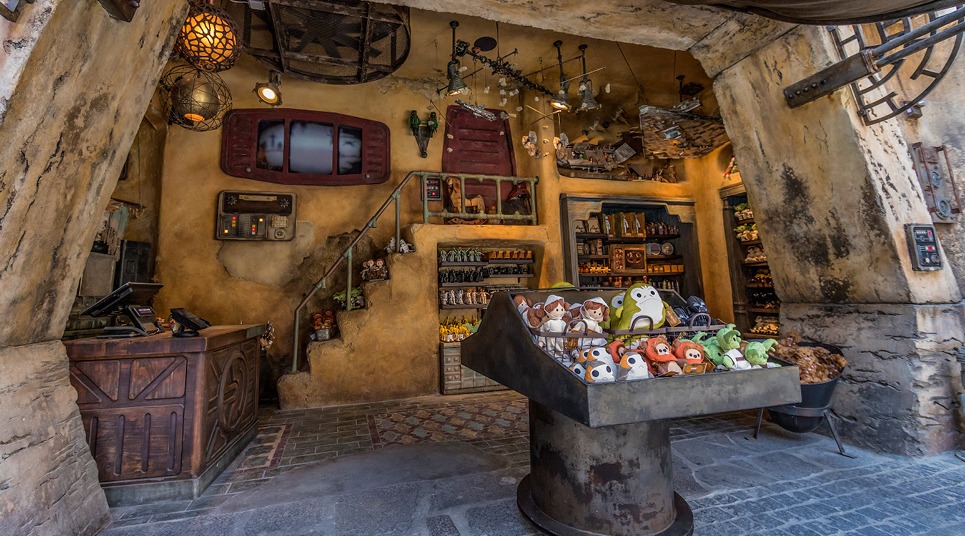 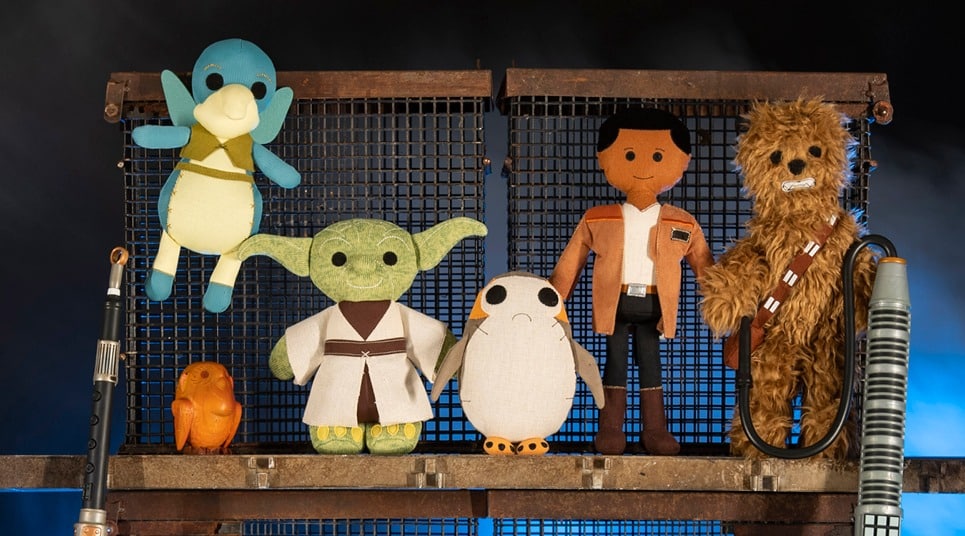 To get into intergalactic fashion and dress up like the characters in the movies, Black Spire Outfitters sells battle costumes, party costumes, uniforms and more informal clothes to move around the village. Two other themed shops, Resistance Supply and First Order Cargo, offer only Resistance and First Order items, each. 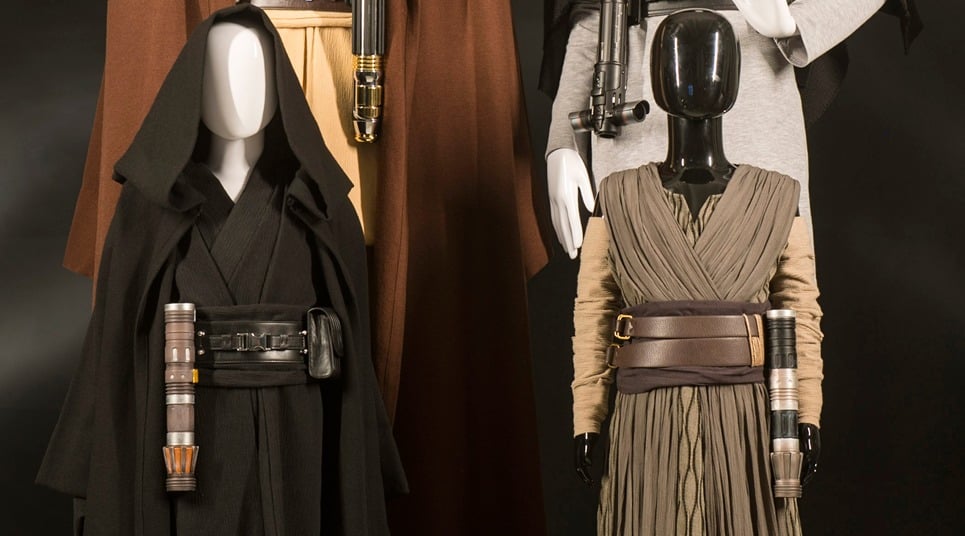 But the pinnacle of starry souvenirs is the visitor’s ability to assemble his own lightsaber. The best-known weapon in cinemas is not simply sold to the Padawans: future Jedis knights must build their own. That’s the experience offered at Savi’s Workshop – a well-stocked shop where a “builder” explains the history and lightsaber’s value to Jedi apprentices.

Fourteen people come to class at a time, and there they choose between cable models, Kyber crystals, blades, plate sets and so on. To have a custom lightsaber, you have to pay $199. Remembering that there are already made affordable versions at the Dok-Ondar store. 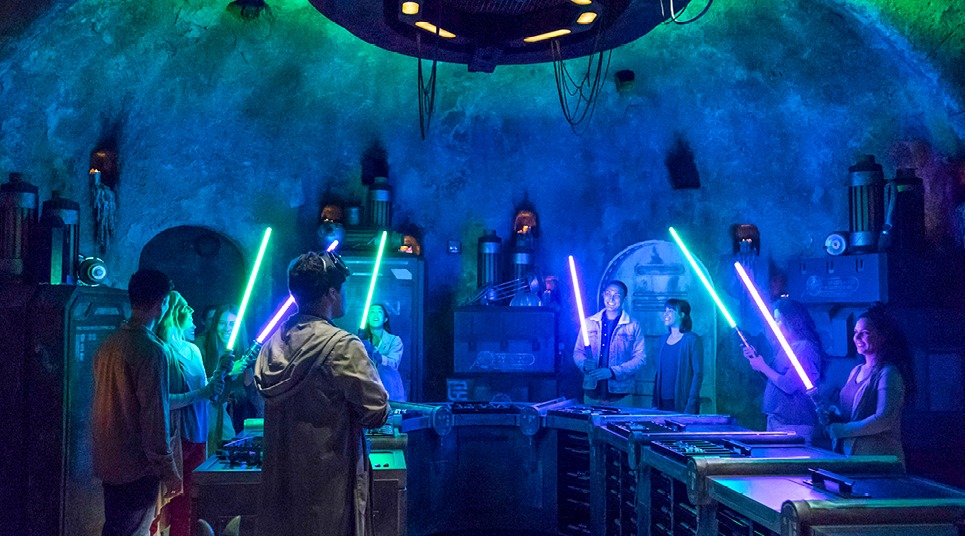 In the same “do-it-yourself” mindset, visitors can also come home with their own droid. The friendly robots that are always helping to save the universe. Parts and accessories rotate on a treadmill and the participants choose the items according to the functions and style they want to give to their new mascot. 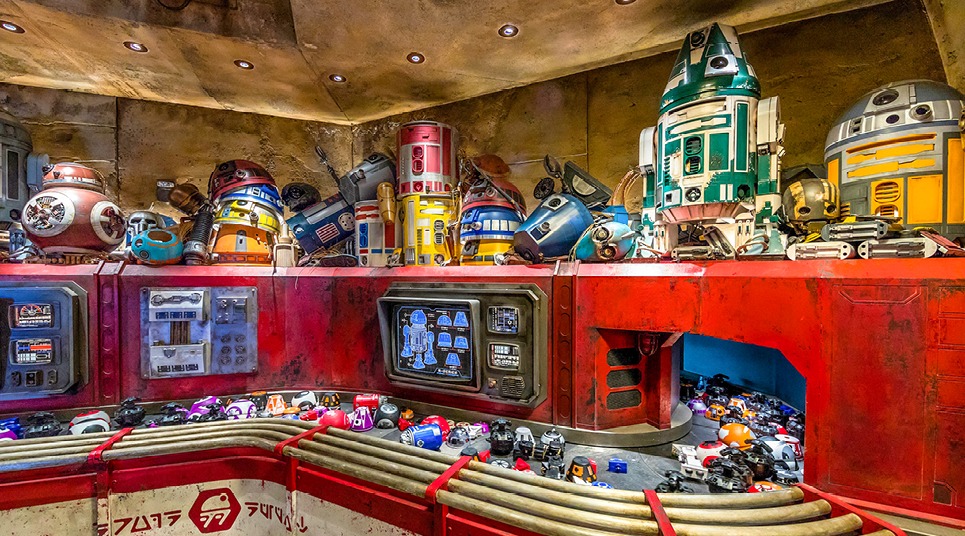 – Walt Disney Imagineering has spent three years developing the costumes that Cast Members wear in their new area. Each employee can choose from a variety of options to create looks that best suit their personality. The custom badges have the names translated into Aurebesh, the language written in the Star Wars galaxy.

– Visitors enter the Millennium Falcon through the same starboard compression chamber used by Han Solo and Chewbacca in “Star Wars: The Force Awakening”.

– The chess game used at the Millennium Falcon central area table is called Dejarik and is on sale at the Toydarian Toymaker; visitors can sit at the table at the “Millennium Falcon: Smugglers Run”.

– In Black Spire Outpost, the DJ in charge at Oga’s Canteen is the R-3X droid, a former pilot of Star Tours’ Starspeeder 3000.

– For the Oga’s Cantina soundtrack, Walt Disney Imagineering has hired musicians and composers from all over the world to create original songs for a playlist from another world. 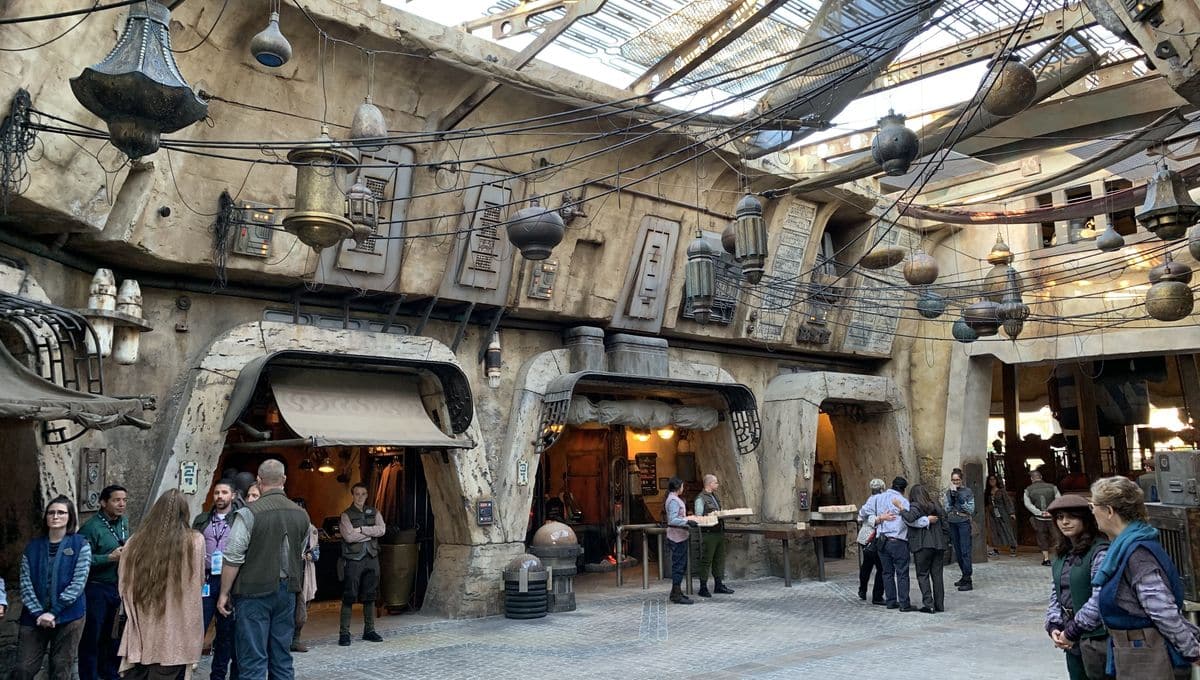 It is possible to meet several characters from the saga, in the Star Wars area:

– Rey, the Resistance heroine, can be seen near the ancient ruins outside the Black Spire Outpost. She is recruiting residents and Batuu visitors for the cause of the Resistance.

– Supreme leader Kylo Ren may appear, several times a day, at the First Order camp at Docking Bay 9. Always in the company of Stormtroopers, marching through Black Spire Outpost in search of the Resistance.

– Visitors may come across Resistance spy Vi Moradi at Black Spire Outpost as she keeps an eye on the First Order. Vi can pass on some of the tricks of her trade and ensure that those close to her are aware that the Resistance is gaining strength.

– The mighty Chewbacca can be seen in Black Spire Outpost or gathering recruits outside the Resistance camp in the ancient ruins of Batuu. He also makes appearances with Rey.

– Stormtroopers patrol the Black Spire Outpost under Kylo Ren`s command. They can approach visitors and interrogate people to get some information about the Resistance’s presence in Batuu. 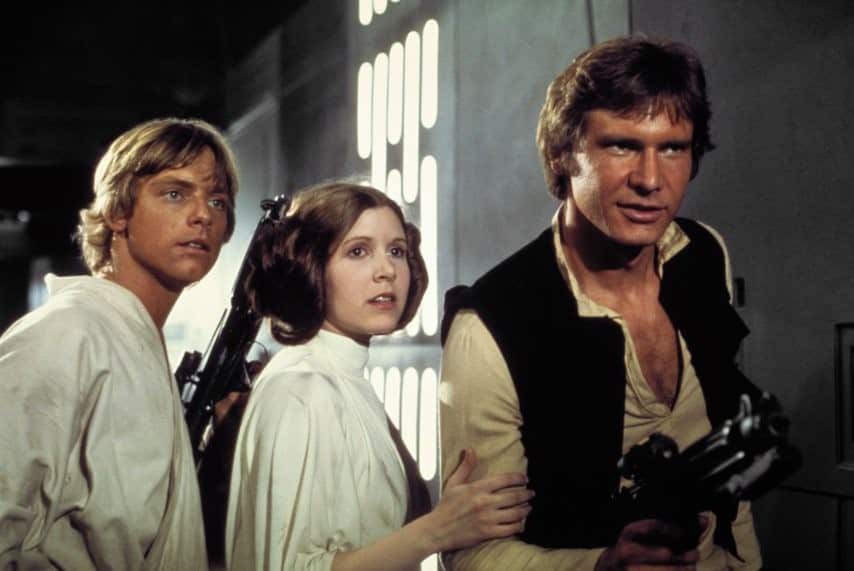 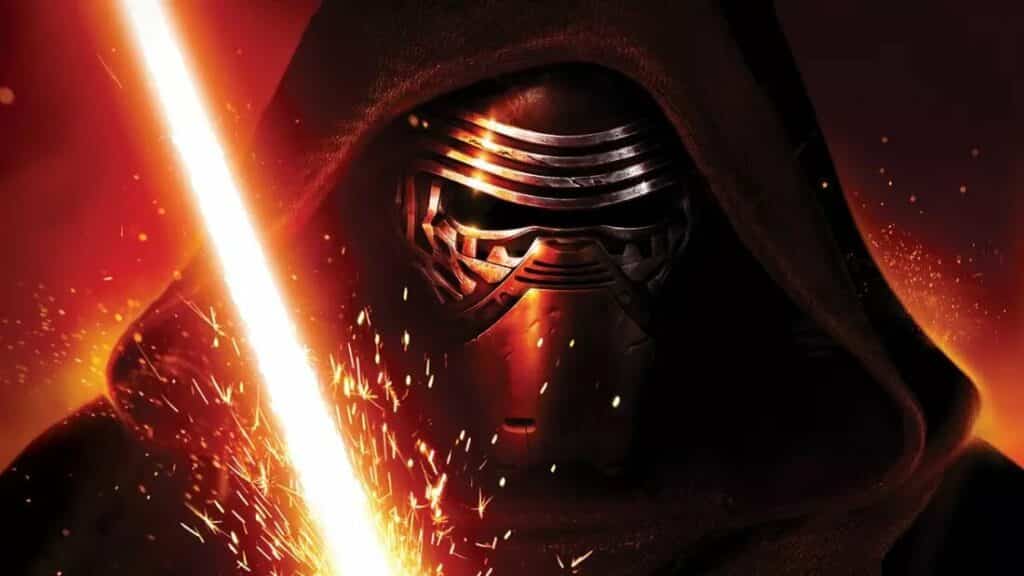 Why Kylo Ren Wears a Mask?

Why Kylo Ren Wears a Mask?