“Take that ridiculous thing off.“

So why does Kylo Ren wear a mask, if he's going to remove it all the time?

Following the example of his grandfather Darth Vader, Kylo Ren renounced his place in the Jedi Order and turned to the dark side of the force.

Kylo Ren’s, helmet was a battered, face-concealing black combat helmet with a silver inlay that radiated from the eyes as a symbol of power. Like the helmet worn by Darth Vader had a integrated voice-projecting vocabulator that modulated his voice, resulting in a deep and intimidating voice.

The helmet granted him a more imposing appearance and concealed his former identity as Ben Solo, son of Han Solo and Princess Leia Organa, nephew and fallen apprentice of Jedi Master Luke Skywalker.

Ren uses it hiding himself behind a cold, unyielding facade, ensuring him a more imposing and powerful appearance. It’s a mean to project a more intimidating persona and a way of separate himself from his previous life.

Kylo Ren used it to hide who he is. He’s wearing a mask to hide his face and voice so the world around him won’t realize he’s truly Ben Solo. His mask is not his new identity’s emblem. Rather, it’s a hiding effort from his old one.

Throughout The Force Awakens and The Last Jedi, Ren wobbles between controlled evil and emotional instability. He may have committed to the First Order and may have led the Knights of Ren, but he is not yet fully dedicated to the dark side as he is still seduced by the light.

As mentioned by Adam Driver, who plays the Kylo Rens’ character: “The person Kylo’s pretending to be on the outside is not who he is. He’s a vulnerable kid who doesn’t know where to put his energy, but when he puts his mask on, suddenly, he’s playing a role.

Clearly, we can see his identity crises whenever he pulls of his helmet.

In The Force Awakens, Kylo allows Ray to discover his own instability after she has a change to look into his eyes. It was the first sign that he wanted to be seen as a real person. Later, when he meets Han, we can see his emotional conflict when presented with a change to return home. Ren, end up killing  his own father believing it would end the war within, freeing himself from his emotional attachments.

However, this act of patricide failed to strengthen his connection to the dark side and contributed to his defeat in a duel with Rey, with no prior experience in lighsaber combat.

Disappointed with his apprentice’s failure, the Supreme Leader Snoke insulted Ren’s helmet and ordered him to remove it. He now regarded Ren as weak, sentimental and unworthy of his grandfather Darth Vader’s legacy.

After this episode, Ren erupted in a rage of self-pity and smashed his helmet against the surrounding metal, destroying it.

Why did Kylo Ren destroy his mask in The Last Jedi?

The plan to destroy Kylo Ren’ helmet came way before The Force Awakens.

According, to Rian Jonhson, Last Jedi director, the main reason for this decision has just to do with the story telling. He considered it an important aspect of the film – to get inside Ren’s character a little more and for viewers to be able to look into his eyes. In fact, the character spent most of The Force Awakens with the helmet removed.

It’s a hard argument to disagree with. As Kylo and Rey continue to make a strong force connection, it would have almost been impossible to continue showing Ben Solo in his Kylo helmet, since it was designed to conceal his identity.

Johnson admitted his decision as somewhat “terrifying”, as the helmet was the symbol of the movie, and because at the time, Kylo was the latest in a line of “cool looking” Star Wars villains, instantly recognizable in part because of his image.

Kylo Ren’s mask was both his grandfather Darth Vader’s representative and a symbol of his willingness to connect with the past’s power and glory.

He shows an evolution in his personality when he demolished that mask. He is free to find his own destiny without that mask. Ultimately, what he does with that liberty will decide if his destiny is tragic or redemptive. 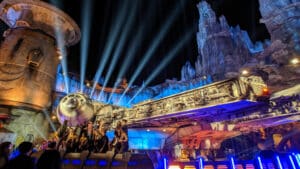 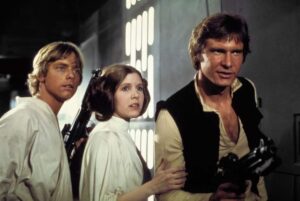